It is no secret that SUVs are dominating the global car market at the moment. It is the biggest car class and a new model comes out virtually every day. However, there is one thing automotive critics always point out and that is the fact that SUVs have abandoned their off-road roots and became comfortable street vehicles which only look rugged but in fact, they are as soft as luxury limousines. Simply, the market asked for that kind of vehicles and manufacturers replied. But, out of all 125 SUV models that are currently on sale, there are still few that are extremely capable off-roaders and are able to cross the desert, run through the jungle and climb the mountains with ease. If you try that with your regular modern SUV, equipped with front wheel drive and a couple of traction control systems, you`re in for a nasty surprise since ordinary SUV will be stuck in a matter of minutes. On the other hand, a capable SUV will go on and never look back. The difference between urban SUVs and off-road SUV is not in their looks or price but in the hardware below the body. The real SUVs have a body on frame construction, 4×4 drivetrain, tough axles and differentials and high body clearance. Urban SUVs have none of that and their construction is similar to that of an ordinary sedan or minivan but with optional all-wheel drive. That is why we have compiled the list of 10 SUVs that still have off-road capabilities and will not embarrass you if you take them off-road. So, here they are. 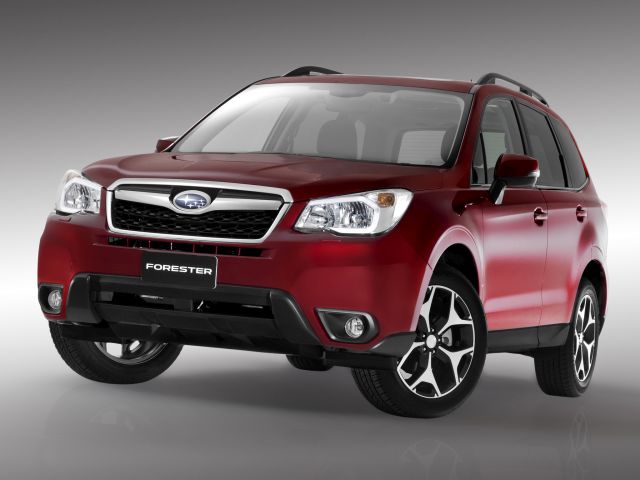 This is not your typical go-anywhere-do-anything SUV but it has pretty decent off-road capabilities due to the fact that it comes with the very good all-wheel drive as standard and flat six engine with a low center of gravity. That makes the Forester stable in difficult conditions and with decent body clearance, it can go through water or mud. Other important features are good equipment, great on-road drivability and comfort and an affordable base price of $23,500. This is a perfect vehicle for people who use their SUVs mostly on the roads but occasionally want to go for a camping trip and experience driving on dirt. 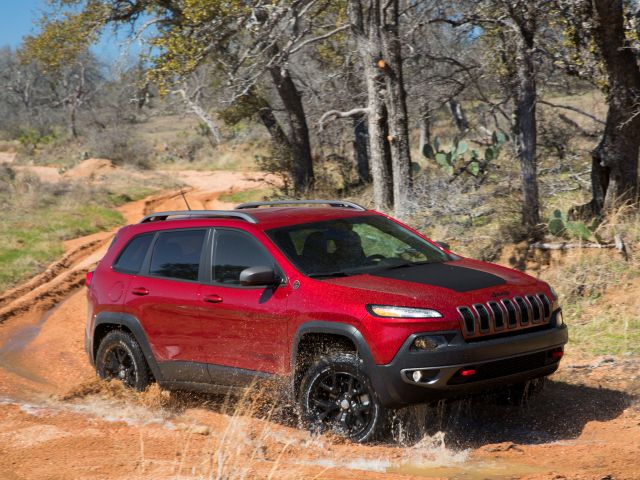 In its base trim, the Cherokee is a standard urban SUV but equipped with Trailhawk package, this car is a real off-roader. Significantly more expensive than a regular Cherokee, the Trailhawk starts at $35,000 but for that kind of money, you will get a lot of off-road components, great all-wheel drive system, 184 hp engine and numerous exterior details which show that you are driving a capable Jeep. Our advice is to opt for the V6 engine because it is better not only for everyday driving but for off-road challenges also. 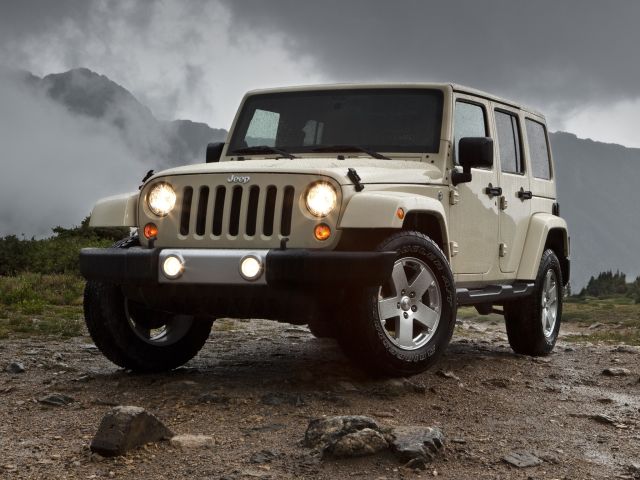 The original Jeep which won the Second World War lives on for decades in form of the Jeep Wrangler. Despite the necessary modernization, the basic spirit and feel are still there. You can have it in two different shapes, two-door or four-door Unlimited and whichever you chose you will get a 285 hp engine, tough and capable 4×4 drivetrain, strong chassis and rugged looks. The highway manners maybe aren’t that good as other SUVs but Wrangler really excels when the tarmac stops. The new model is on its way but doesn’t expect it to be significantly different than the current one. The prices start at $28,000. 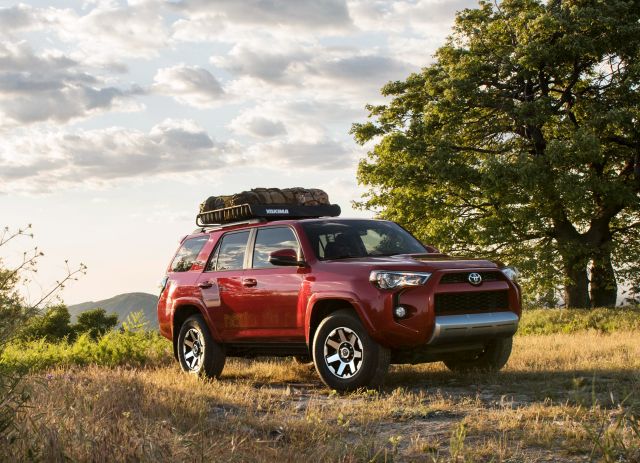 Toyota 4Runner is one of the last SUV models with rugged mechanics and chassis directly from a pickup truck. This means that the 4Runner is not exactly the most comfortable on the road but it is very capable as an off-road vehicle, tow truck or something similar. With a towing capacity of 5,000 pounds, great off-road skills, and 270 hp engine, this is the perfect car for trips to the forest and towing a trailer behind. Still, 4Runner has decent interior comfort, nice equipment, and a big trunk. The prices start at $35,000 which is not much for such a usable and versatile vehicle. 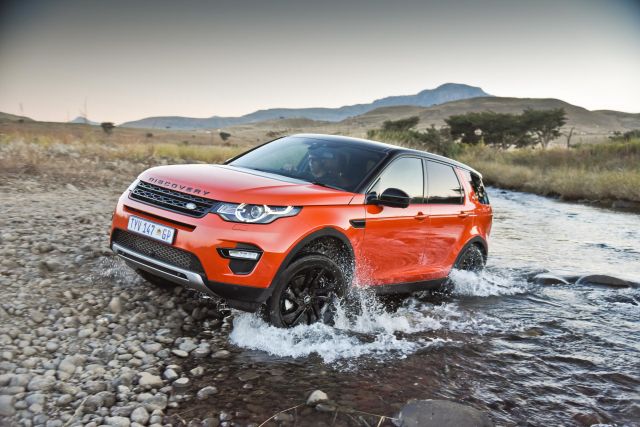 Despite the fact that Land Rovers are considered luxury SUVs, almost all of them hide true off-road potential and have capable mechanics underneath their fancy looking bodywork. The Discovery Sport is an interesting model since it features intelligent all-wheel drive, space for up to 7 passengers and various electronic aids that will help you tackle different road conditions. The base engine is a 2.0-liter turbocharged unit with 240 hp which is mated to 9-speed automatic transmission. However, the luxury reputation and advanced technology mean that the Discovery Sport is not the cheapest SUV on the market at $39,000 base price. 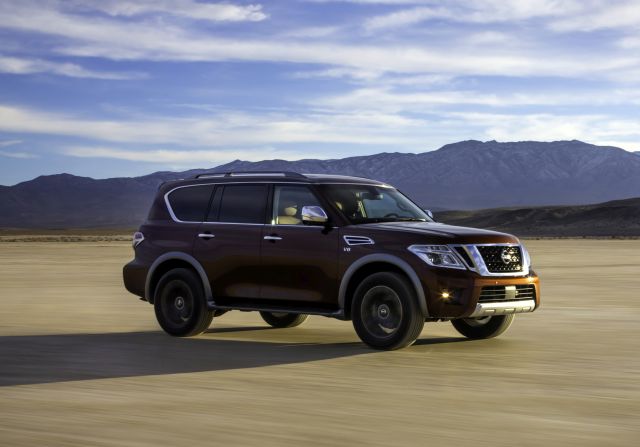 The Armada is a big, tough, heavy and powerful SUV with off-road capabilities and four-wheel drive. Although it feels best on the highway the Armada can cross the desert and climb a mountain if needed. Under the hood is a massive 5.9-liter V8 with 395 hp which powers all four wheels through a 7-speed automatic. Whether you’re using your Armada on or off-road, all occupants will be surrounded by luxury and comfort. The prices start at $46,000 which is not a lot of money for such a powerful, comfortable and big SUV. 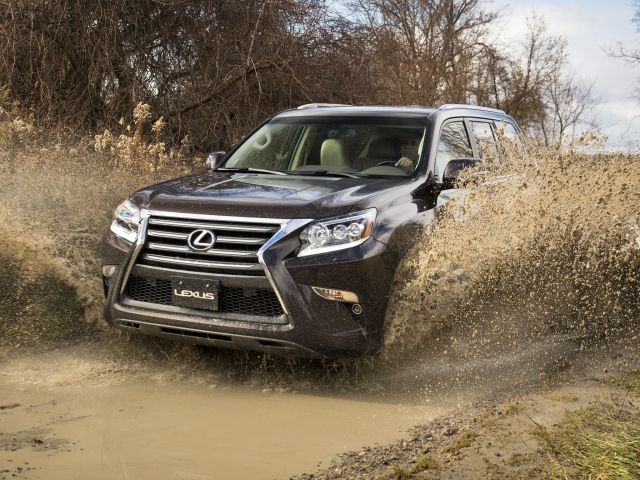 The GX has tough chassis and luxurious body on top of it, making this Lexus a true off-roader in a tuxedo. From outside, GX looks like another luxury SUV without any terrain capabilities but, in fact, it is quite the opposite. It is powered by a 4.6-liter V8 with 301 hp, 6-speed automatic transmission and four-wheel drive with locking central differential. Of course, leather interior, infotainment system, and all expected luxuries are standard which makes cruising in this Lexus pretty comfortable whether you’re going on or off-road. The prices start at $52,000. 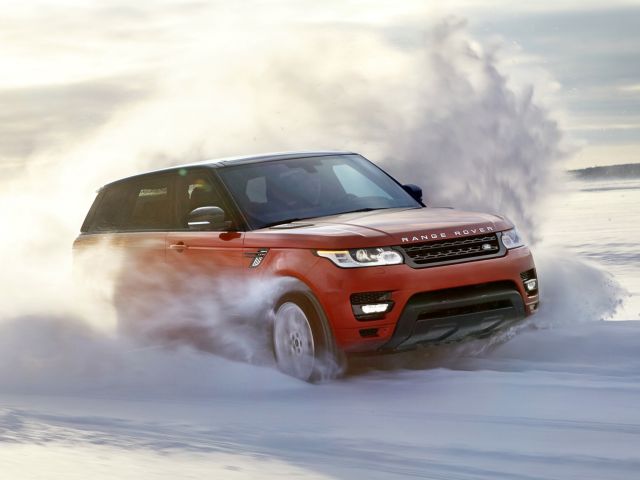 Similar to the Discovery, Range Rover is all about luxury and performance but without forgetting its off-road origins. The new Range Rover is primarily a luxury SUV but with off-road capabilities which are not visible right away and can pleasantly surprise you when you take this $66,000 vehicle off the tarmac. Range Rover`s skills come from the very advanced all-wheel drive, good chassis, and electronically controlled differentials. This way the vehicle is capable of adapting to conditions of the terrain and transferring all the power to the wheel which has the most traction, keeping you moving even on the toughest terrain. You can choose between 254 hp diesel or the 340 hp supercharged gasoline engine. 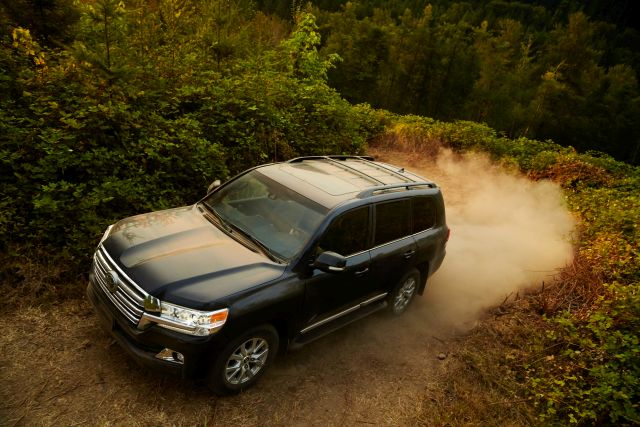 The Toyota Land Cruiser is a legendary off-roader which turned luxury SUV but still retained enough capabilities that it can cope with almost anything, on and off-road. It is a big, heavy, powerful and luxury vehicle with the sturdy body on frame construction, tough differentials, and a monster of an engine. The power comes from a 5.7-liter 381 hp V8 and it is connected to an 8-speed automatic and permanent all-wheel drive which is a standard feature, of course. The interior is very well equipped with third-row seating and all conceivable luxuries. The prices start at pretty steep $85,000. 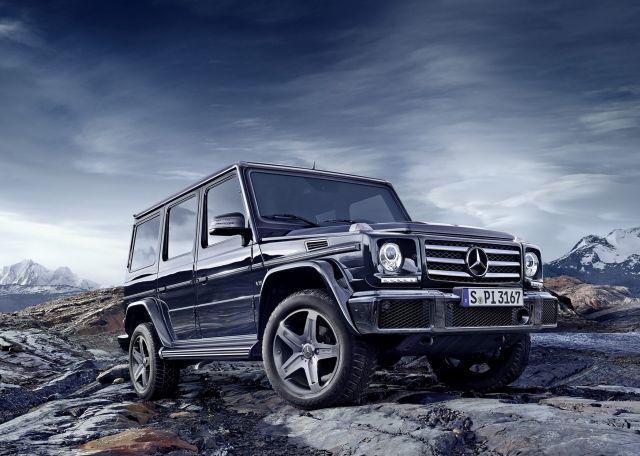 It is less known fact that the G-Class, in fact, started as a military project but was offered as a civilian vehicle after the cancellation. This explains military grade engineering, toughness, and power that is behind one of the most iconic off-road SUVs ever. After almost 40 years in production, G-Class changed very little and always kept its rugged charm, angular design, and uncompromised off-road skills. The latest versions are more on-road focused with powerful engines and over-the-top luxury interiors but the G-Class is still one tough mountain climber. The 2017 G-Class can be had with several engines, starting from a 416 hp unit. Also available is the G-Class AMG with 563 hp or even 612 hp in ultimate G65 AMG version. As you can expect, the prices are astronomical and the base level G-Class starts at $125,000.