10 Most Fuel Efficient Electric Cars in 2016

Electric cars have been a thing for much longer than most people would imagine, with the first design making its debut more than 100 years ago as early innovators from France and England built the forerunners of today’s modern electrics. A chemist in Des Moines, Iowa built America’s first electric car, a six-seater with a top speed of 14 mph. Electric cars caught on, particular in urban areas, and saw soaring popularity as the availability of electricity increased.

The first hybrid electric was built by Ferdinand Porsche, founder of world famous Porsche Motors at the turn of the century, and inventor Thomas Edison was convinced electrics were a far superior technology to the gas-powered engine.

The mass produced Ford Model T, combined with cheap and easily available gas, dealt a deathblow to those early fledgling electrics assigning them to the annals of history until the oil embargo of the 1970s reawakened interest. Automakers were interested in exploring alternative fuel vehicles, but the electrics of the 1970s proved to be low on power, often topping out at 45 mph and managing just 40 miles between recharges, making them ineffective competitors in a gas powered freeway-driven world.

The world was then introduced to the Toyota Prius hybrid, with a nickel metal hybrid battery, as it was mass-produced in 2000. Early adopters included a number of celebrities, which helped to raise its profile and ease a path into the mainstream. The Prius came to market at a time when concerns about the environment and rising gas prices were reaching an apex, propelling it to the status of the best-selling hybrid worldwide.

The demand for electric is expected to continue to grow, whether it’s hybrids, plug-in hybrids, or all electric. Electrics have captured a small, but still expanding market that’s expected to hit 7% worldwide by 2020.

The efficiency of an electric is calculated by MPGe and has been established as the alternative to MPG for gas powered engines. MPGe represents the number of miles a vehicle can travel with the electric energy equivalent of a gallon of gas, 33.7-kilowatt hours of battery power. This information allows consumers to know how much it is costing to operate their electric car.

Now that’s we’ve learned a little about the history, rising popularity, and how efficiency of electrics is determined, let’s look at the 10 most fuel-efficient electric cars of 2016 in all their awesomeness!

Please note: All per mile and per charge costs are based on a national average of 12 cents per kW. 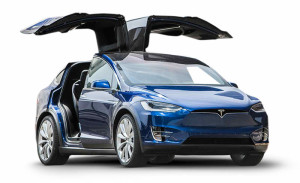 Breaking in to the top 10 is the Tesla Model X, an electric SUV that features a 90 kWh battery and a 257-mile range. An MPGe of 92 makes it a solid choice for efficiency. The Model X is the only electric on the market featuring all-wheel drive and a 5,000 lb. towing capacity, allowing it to compete with traditional SUVs. It’s rocking gullwing doors and comfortable seating for seven, making it a great family option. In the just for kicks category, it’s outrageously fast, climbing from zero-60 in 3.2 seconds! It’s packed with safety features, including a floor-mounted battery designed to lower the center of gravity. The drag co-efficient is 20% lower than the next best SUV, and the active spoiler deploys from the rear liftgate, optimizing efficiency and stability. The estimate cost of driving 40 miles? A budget sparing $1.82, or 4.5 cents a mile.