Brazillian F1 star Ayrton Senna will be forever remembered not only as one of the greatest racing drivers in history of motorsports, but as the greatest driver ever to sit in an F1 car. His inherent talent was intertwined with kind off-track personality, deep devotion to Christian faith and fierce competitiveness when he’s behind the wheel, creating the legend of a man even during his lifetime, but even more after his untimely passing during the 1994 Italian Grand Prix. Today, we bring you the moments that truly defined the magical career of Ayrton Senna.

1 1983 Testing – No Vacancy in Williams and McLaren 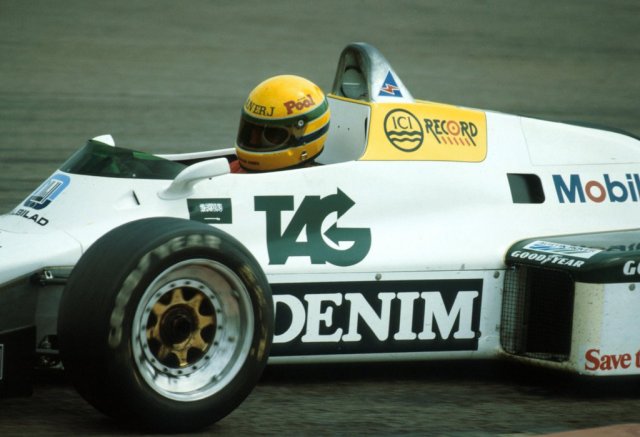 During 1983, Ayrton Senna had the opportunity to test drive for four Formula One teams. The teams were McLaren, Williams, Brabham and Toleman, and testing for Williams, Ayrton was faster than the team’s first driver, reigning champion Keke Rosberg. As neither Williams nor McLaren had a free spot in their team, and as Brabham’s sponsor Parmalat wanted an Italian driver, Senna signed for Toleman with Johnny Cecotto as his teammate. Although he signed for a relatively new underdog team, Senna was ready to take the world of motoring by storm. 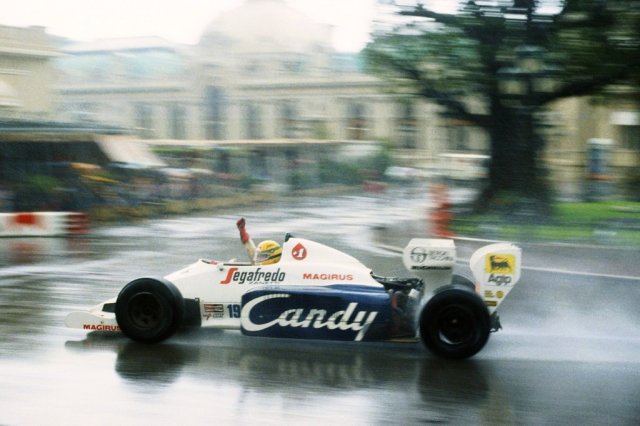 The 1984 Monaco Grand Prix was the only race held on a wet track during the season, and was one of the most exciting ones ever held in Monaco. In an underpowered Toleman, Senna started the race from thirteenth position. As the downpour continued throughout the whole race, Senna was progressing, eventually overtaking Prost right at the finish line on lap 32, when the red flag was waved due to grueling conditions. However, according to the rules of the time, it was the last completed lap that actually counted, which meant that Prost had won the race as he completed the previous lap as the leader. Regardless of that, this race is solely remembered for Senna’s virtuosity behind the wheel of an underdog car. 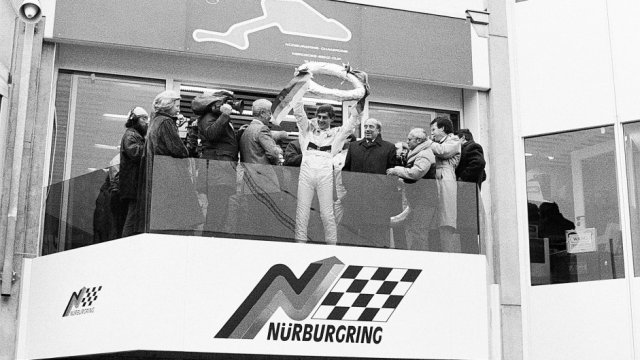 To celebrate the opening of the new Nurburgring GP track, an all-star race was held in identical, newly unveiled Mercedes-Benz 2.3-16 cars. The homologation special was built to compete in DTM races, and as a part of its promotion, some of the best drivers of all time hopped into its seats to take part in the race. The starting grid saw the greats like James Hunt, Jack Brabham, Alain Prost, Niki Lauda and Keke Rosberg, as well as Ayrton Senna, a rookie in a champagne-colored Mercedes-Benz No. 11. In the battle against the sport’s greatest drivers, including ten world champions, Senna won the exhibition race in front of Niki Lauda, once again proving that he had a huge career in front of him. 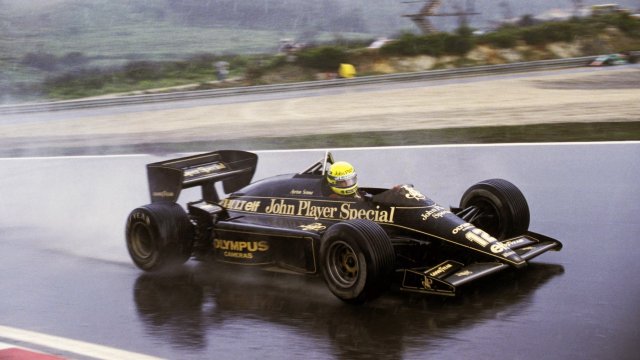 In 1985, Ayrton Senna moved to Lotus-Renault, and he soon won his first Grand Prix race at Estoril. Starting from pole position, Senna also scored the race’s fastest lap, again proving his brilliance in wet conditions. The young Brazilian won the race by leading every single lap of it, with a margin of 1:02.978 over the only car in the leading lap. The race was cut short on lap 67, as it exceeded the two-hour limit. By winning this race in such a dominant manner, Ayrton Senna definitely established himself as a true master of driving in the rain. 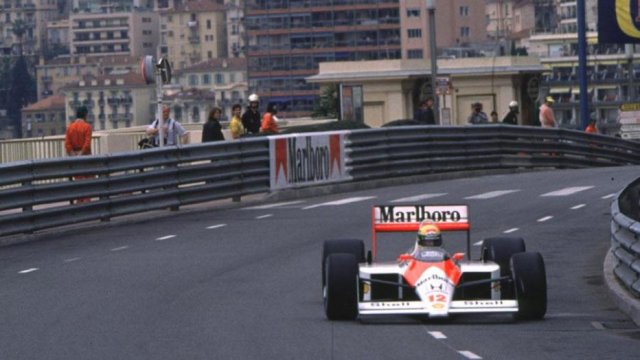 The crowd at the 1988 Monaco Grand Prix saw what is still the most amazing qualifying lap on the track. His time was 1:23.998, 1.427s faster than his teammate Alain Prost. During the race, Senna was in constant and comfortable lead, but it all changed as the race was coming to an end. With eleven laps to go, Senna was ordered to slow down in order to enable an easy 1-2 finish with Prost on second, but he quickly lost concentration, crashing into the barrier at Portier corner on lap 65. Shaken and furious at himself for the error he’d made that cost him his second Monaco victory, Senna stormed into his apartment and the team didn’t hear from him until the evening. “Suddenly I realised that I was no longer driving the car consciously, I was driving it by a kind of instinct, only I was in a different dimension. It was like I was in a tunnel.” Senna commented on his pole-winning lap, and that became one of his most cited quotes. 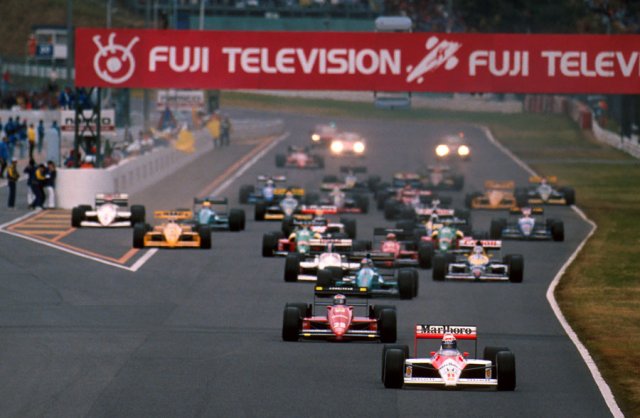 Senna and Prost battled hard during the 1988 Formula One season, and McLaren-Honda’s home track Suzuka was the penultimate race that year. The starting grid saw Senna on pole with Prost on second, but the Frenchman had a better start with Senna stalling on the grid. Luckily for Senna, Suzuka had a sloping grid, which helped him jump start the car and return to the race. By lap four, Senna was on fourth, and on lap 14, the rain started on portions of the track, additionally aiding him. On lap 27, Senna eventually caught Prost who suffered from gearbox issues, managing to overtake him while they were both lapping Andrea de Cesaris. With no one in front of him, Senna drove a series of amazing laps, breaking the track’s record on lap 33. By winning in Japan, Ayrton Senna secured his first Formula One title, one of three in total. That year, Senna also beat Prost’s 1984 record by scoring eight wins in one season. 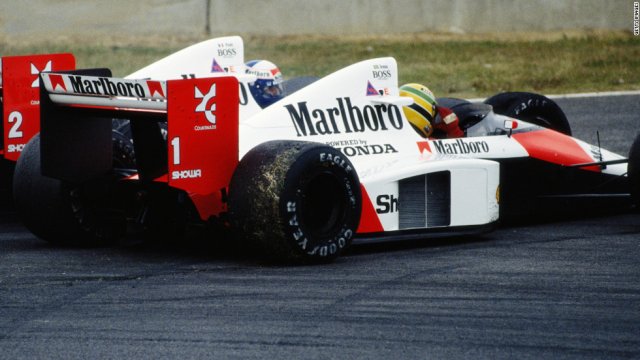 The 1989 Formula One season was marked not only by McLaren’s utter dominance, but the fierce rivalry of their top drivers as well. Before the 1989 Grand Prix at Suzuka, Prost had a 13-point lead over Senna, and the two had an uncompromising battle during the whole race. The dogfight culminated when Prost blocked Senna at the chicane after the 130R corner. The crash put Prost out of the race, but Senna was determined to continue, signaling to the marshals to push his cars down the escape road. Senna used that to restart his damaged car and return to the track, driving it for an entire lap and into the pits. With his front wing repaired, Senna soon caught Alessandro Nannini, overtaking him on the same place where he collided with Prost. Immediately after the race, Senna was disqualified for missing the chicane after the crash, which led to a series of protests, and which ultimately gave Prost the title. However, nobody could deny Senna’s determination to return, and his will to win against all odds. 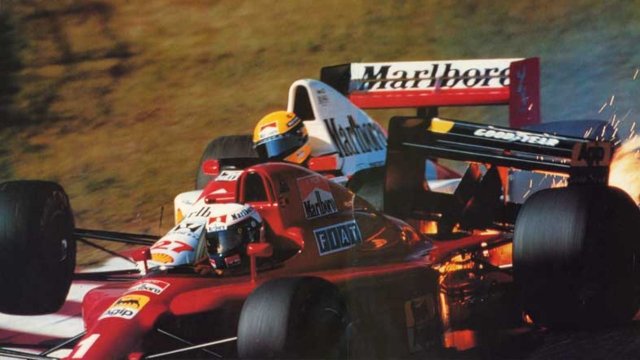 Third time in three years, Japanese Grand Prix was the decisive race of the season. This time, Prost and Senna were rivals driving for two rivaling teams – Ferrari and McLaren, and Senna was leading in the season’s standings. Senna won the pole over Prost. Race authorities decided that the pole position should be on the right, dirtier side of the track, which led to Senna’s vigorous protests. He demanded that the pole should be on the left side, the one on the racing line. The authorities declined the demand, which infuriated Senna, who wowed that he’ll try to overtake Prost in the first corner should he take advantage. That’s exactly what happened, as the aces collided in the very first seconds of the race. With both drivers going off track, the championship went to Senna who showed that he’s a driver of zero compromises when it comes to winning.

In 1990, Jackie Stewart interviewed Senna in what’s one of the most intense Formula One interviews of all time. The interview was not just a clash of generations, but a clash of philosophies and egos as well. At the very beginning of the interview, Senna was confronted about the Suzuka incident, and the heated exchange of words prompted another famous quote: “Being a racing driver means you are racing with other people. And if you no longer go for a gap that exists, you’re no longer a racing driver. We are competing to win, and the main motivation for all of us is to compete for victory.”

One of the most iconic on-board videos of all times is Ayrton Senna’s lap around Monaco during the 1990 rendition of the race. The Brazilian drove furiously to take his third victory around Monaco in front of Jean Alesi and his teammate Gerhard Berger. The famous recorded lap shows true mastery of Ayrton Senna as he battles the curves of Monaco in the iconic Marlboro McLaren. 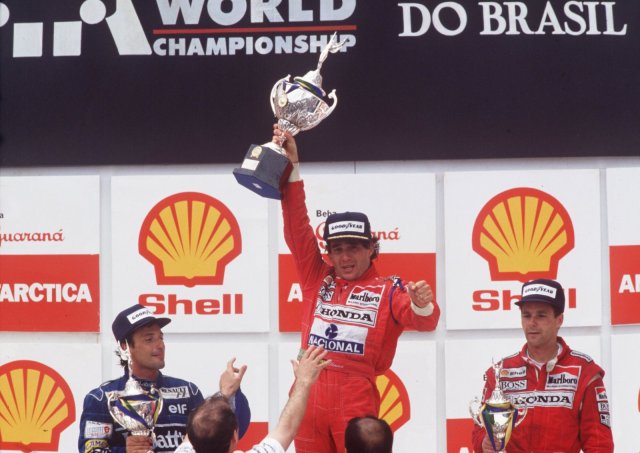 Despite becoming one of the most successful and accomplished drivers of all time, Ayrton Senna still longed to put one very significant triumph under his belt. It was winning the Brazilian Grand Prix in front of his fanatical audience in his home country. The victory came in spectacular fashion and was undoubtedly Senna’s most emotional podium celebration. Near the end of the race, Senna suffered severe gearbox breakdown, losing third and fifth gear. These grueling last laps had Senna so exhausted that he couldn’t get out of the vehicle by himself, and he was transported to the podium in a medical car. With fever and cramps in his hands, he could barely lift the trophy, but his dream was made true thanks to his otherworldly determination and will. 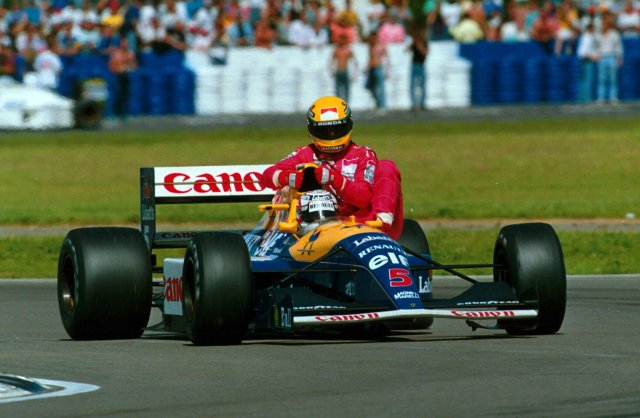 Although this moment had zero impact on Ayrton Senna’s career, the picture became one of the most iconic Formula One moments, and a symbol of friendship despite rivalry. As Senna ran out of fuel in the last lap and Nigel Mansell won the race, the Briton decided to take Senna with him during his victory lap. With Senna sitting on the left side of his car, Mansell drove back to the paddocks, making Formula One history with his act of true friendship and respect. 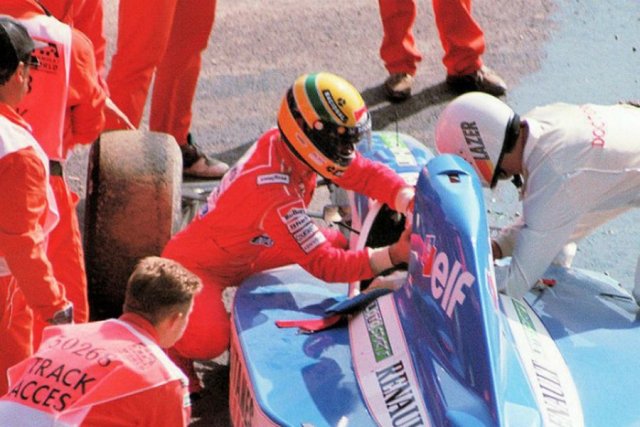 During qualifying at the 1992 Grand Prix at Spa-Francorchamps, Ligier Gitanes driver Erik Comas had a terrible crash at the Blanchimont corner of the track. Senna was driving right behind him, and upon witnessing the crash, he immediately stopped the car, running to the Frenchman’s wrecked car. With that move, Senna risked his own life as he could have been hit by other moving cars, but he didn’t have any second thoughts about what had to be done. He shut down the engine of Comas’ car, and held his head in stable position until the paramedics came and took over the driver. 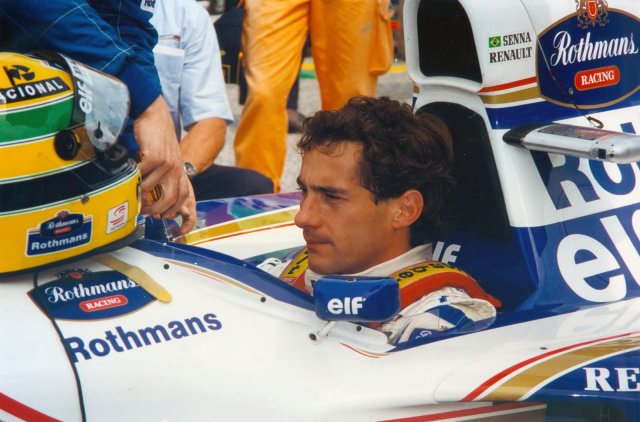 At that fateful 1st of May 1994, Ayrton Senna lost his life in a tragic crash at the high speed Tamburello corner. The crash occurred on lap 7, while Senna was leading the race. The tragic event ended the life of Formula One’s greatest talent, and the world lost one of the kindest souls and a hero to millions of people worldwide. 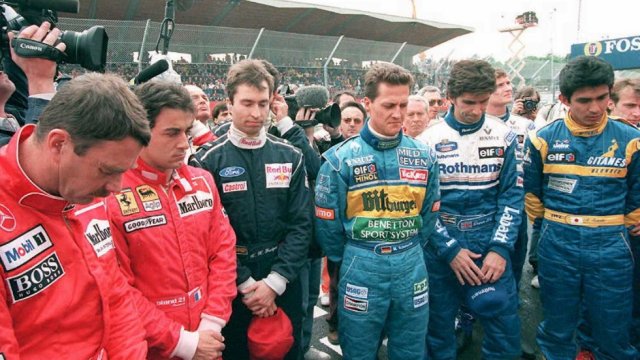 During the Sunday race Ayrton Senna had an Austrian flag in his car, with plans to honor Roland Ratzenberger, Simtek driver who lost his life during Saturday qualifying. Evidently shaken by Ratzenberger’s death, Senna reformed Grand Prix Drivers’ Association alongside Michael Schumacher and Gerhard Berger on the 1st of May. Senna’s funeral was attended by thousands of mourning fans, and the main pallbearer was his once fierce rival Alain Prost. Senna’s death left the whole world in sadness, and with his passing, Formula One lost its beauty and charm.