15 of the Craziest Concept Cars

Since the introduction of the 1938 Buick Y-Job, a car which is today considered the first official concept car, these experimental vehicles have served various purposes. Sometimes, concept cars were made to highlight the new design language of a company, other times, they were means of testing new technologies, but often, they were both. Over the decades, there have been many unusual, quirky and downright crazy concepts which explored ideas and ways the companies or independent designers were thinking about cars. That’s why we put a spotlight on these one-off greats to find the craziest, most intriguing concept cars in history. 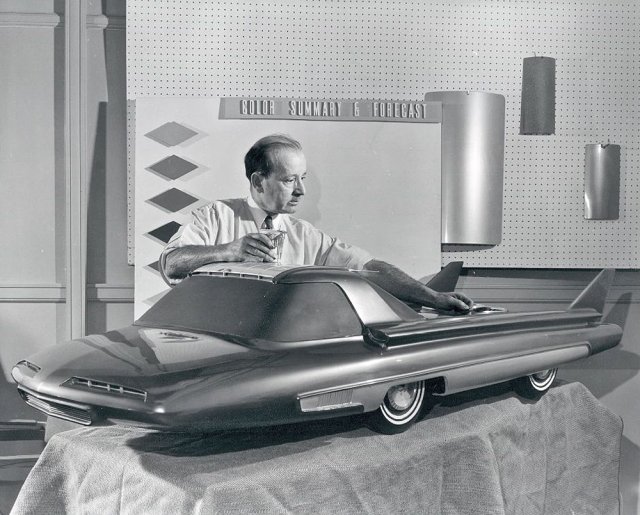 In the fifties, America was walking on a tightrope between endless optimism and anti-communist paranoia. In the 50s folklore, atomic power was everything, and that’s how the Nucleon concept car emerged from Ford Motor Company’s development branch. When it came to design, the Nucleon was an amazing car which brought simplistic 60s lines to Ford’s vision of the future. To be fair, Nucleus wasn’t a full-sized concept car, nor it was actually powered by a real nuclear reactor, but the sheer idea of atomic cars is what brought this odd fellow to the list. As pointless as it was, the Nucleon still managed to leave a mark in the industry by introducing electronic torque converters. 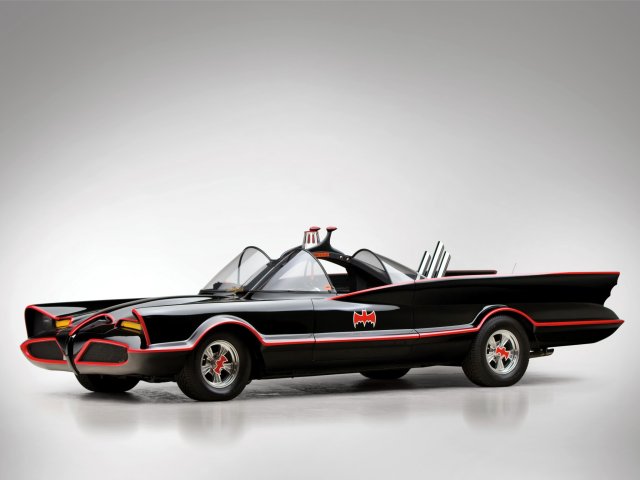 Another Googie futuristic concept from the Ford Motor Company was the Lincoln Futura. This bubble-top two-seater was designed by Bill Schmidt and John Najjar, and the bodywork was hand built in Italy by Ghia, which was a common practice in the fifties. Unlike the Nucleon, Lincoln Futura was a fully operational full-scale car, and it gained instant recognition by car fans worldwide. Lincoln Futura became a pop-culture icon after being sold to the legendary customizer George Barris, who used it to create the Batmobile for the 1966 Batman television series. 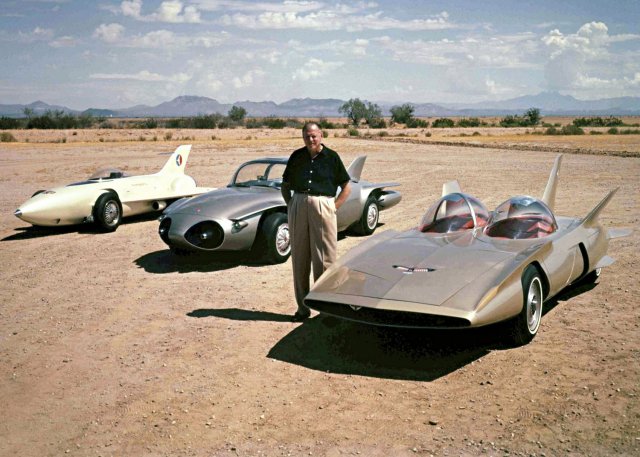 While Ford had atomic ideas for the future, General Motors was giving its concept cars wings and jet engines. There were a total of four Firebird cars, named Firebird I, II, III and IV respectively, and the original three were built for 1953, 1956 and 1959 Motorama Shows. Their designer was Harley Earl, the man behind Cadillac’s tailfins Chevrolet Corvette and the before mentioned Buick Y-Job. The main features of the Firebirds were gas turbine engines, and these brilliant land planes perfectly reflect what the fifties were all about. 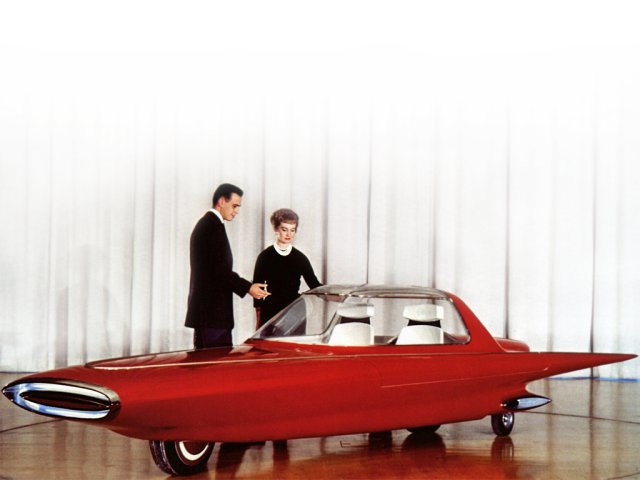 A gyroscopic two-wheeler designed by Syd Mead and Alex Tremulis? Why the heck not, said Ford, and the development of the Gyron began. This vehicle was never intended to be put into production, but it was a marketing success, partly to outrageous claims of cordless telephones, fuel cell power and dashboard navigation. Sadly, this concept car was completely burned in the Ford Rotunda fire in 1962, and there is just one existing styling model, but it’s been sold to an anonymous private collector in 2012. 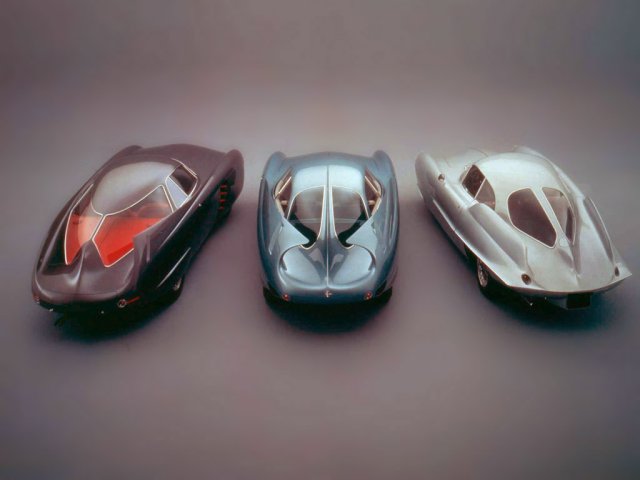 On the other side of Atlantic, Italy had its fair share of lunatic concepts of the fifties. The most amazing was a series of Alfa Romeo concept cars called BAT: Berlinetta Aerodinamica Tecnica. Three cars were built, named BAT 5, 7, and 9 respectively, and they were designed by Bertone’s designer Franco Scaglione. The cars had a supersonic tear-shaped design with curved tailfins, which made them look both amazing and unlike any other car of the era. 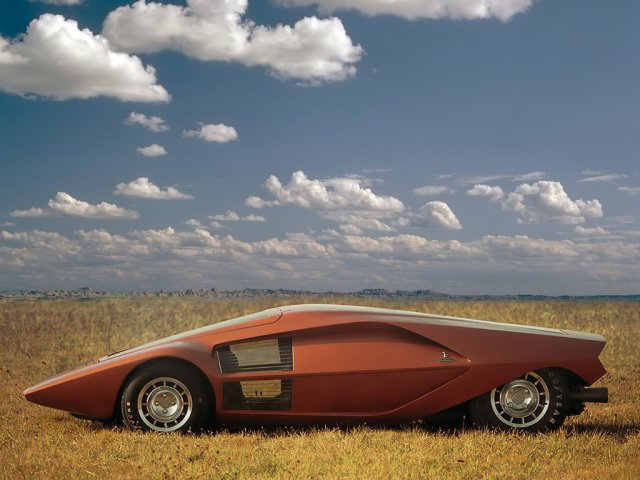 Fast forward a decade, and there’s another Bertone concept on our list, only this time, it’s a wedge-shaped wild automotive dream. Wedge cars were a huge hit in the seventies, and Lancia Stratos Zero was the most prominent concept of the era. It was as sharp as a blade, wild and uncompromising, and it also had windshield entry and triangular hood opening, which were another unbelievably cool details for every kid who grew up in the seventies. 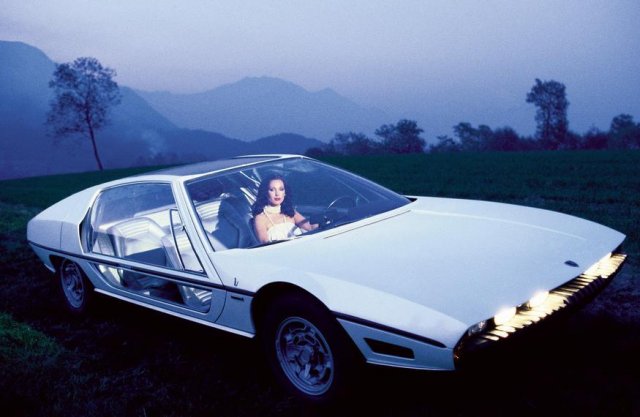 Bertone’s Marcello Gandini created this four-seater concept as a proposition for Ferruccio Lamborghini, and the main feature of the Marzal were glass-clad gullwing doors that granted access to both front and rear seats. The car was powered by a 2.0L inline-six engine, and was publicly driven only once by Princess Grace and Prince Rainier, as the pace car for the 1967 Monaco Grand Prix. Although the Marzal never made it to the production line, some elements were later used for the V12-powered Espada. 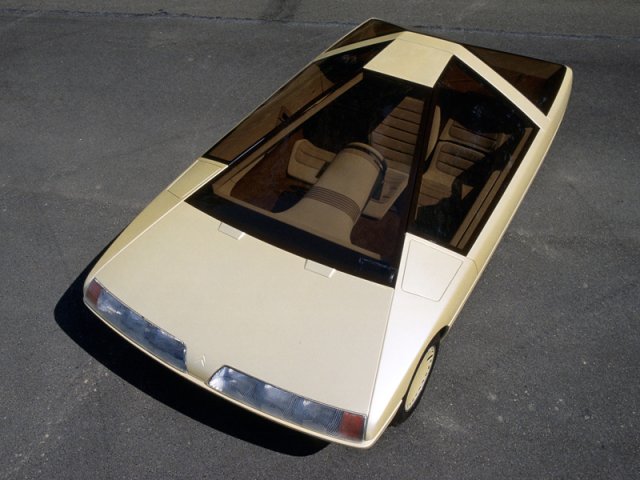 A pyramid-shaped three-seater with a miniature roof is something one could only expect to see from Citroen, French manufacturer known for unusual ideas and bold. Years before the McLaren F1, Citroen incorporated the central driver’s position, with the addition of butterfly doors, hydropneumatic suspension and awfully awesome interior colorway. This amazing greenhouse of a car is one of the most unique concepts of the wedge era, and it was a true French design exhibition. 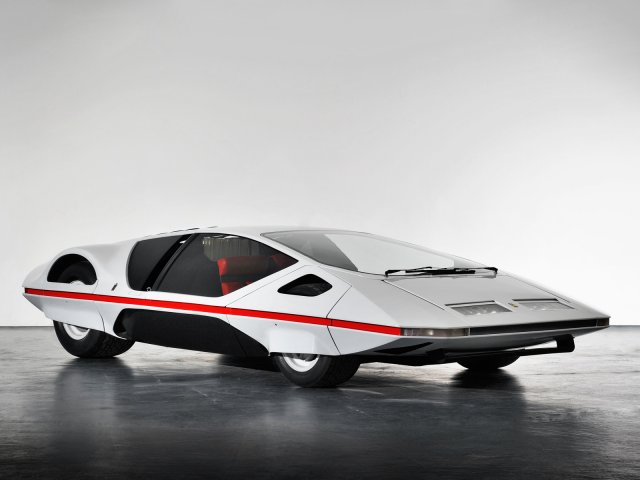 Pininfarina’s Ferrari 512S Modulo is perhaps the greatest Ferrari concept car of all time, and it featured a spaceship-like design in white with roof entry and partly covered wheels which give it the look of a machine that’s really out of this world. The greatest thing about this car is that it was actually based on a Le Mans-racing Ferrari 512, 23rd of 25 built. With that in mind, the 512S Modulo had a claimed top speed of 220MPH, courtesy of 550-horsepower V12 engine. The car was owned by Pininfarina for quite a while, and was sold to James Glickenhaus in 2014. 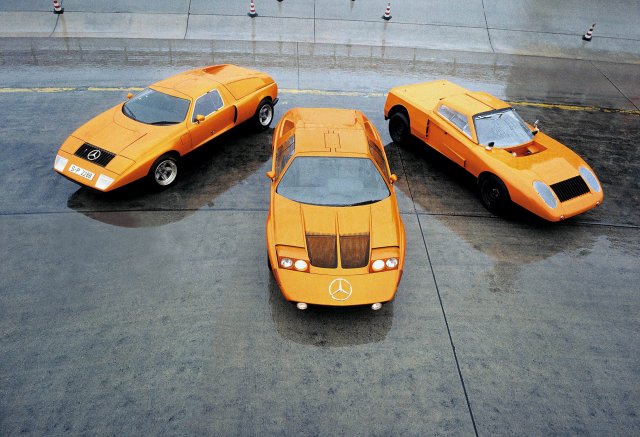 The most iconic Mercedes-Benz concept car was the C111, which was actually a series of slightly different experimental vehicles initially powered by rotary engines. Later on, the company ditched the Wankel engine in favor of diesel power, and thanks to fantastic aerodynamics for the time being, the C111 managed to reach 200MPH in 1978. Mercedes-Benz also experimented with 500-horsepower 4.8L V8, and that car broke the average speed mark of 255MPH mark in 1979. Mercedes-Benz historians claim that the company had received numerous offers by the world’s richest, but ultimately declined to produce a limited run of these gullwing coupes. 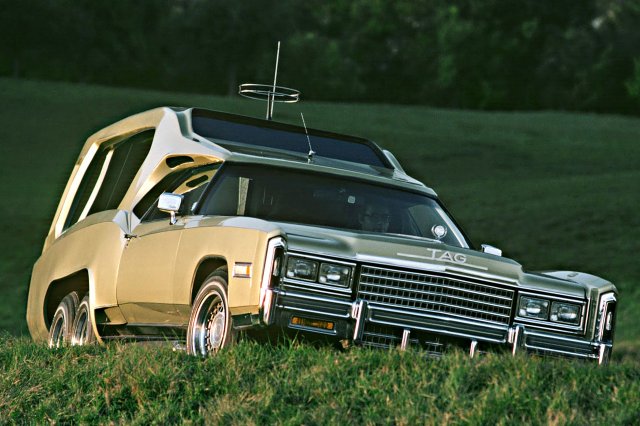 Swiss automotive designer Franco Sbarro is best known for completely bonkers projects, and Cadillac TAG Function Car is undoubtedly one of them. The idea behind this six-wheeler is a mobile suite of the highest late 70s standard. The car was based on a Cadillac Eldorado, and for this opulent creation, Sbarro collaborated with Techniques D’Avant Garde. Amazingly enough, this concept eventually went into limited production of 25 examples, proving that all cars eventually find the right customers, even the craziest ones. 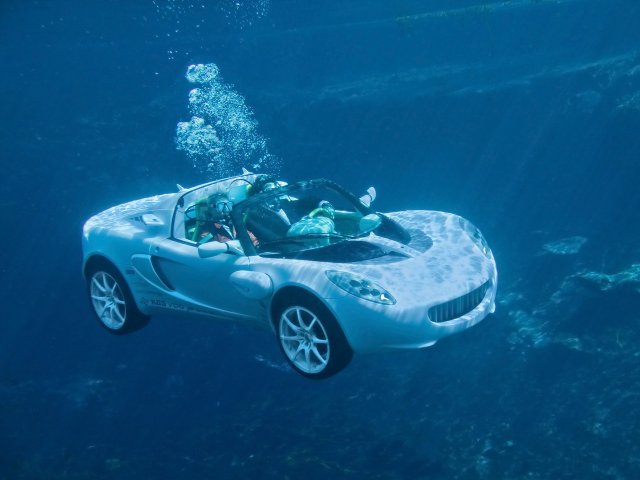 Another crazy Swiss concept is a courtesy of Rinspeed and is a direct nod to the diving James Bond Lotus Esprit S1 from the 1977 movie The Spy Who Loved Me. The sQuba concept is based on the Lotus Elise, and it’s a zero emissions submarine car that Rinspeed CEO Frank M. Rinderknecht unveiled at the 2008 Geneva Motor Show. When it’s not driving on the roads, the sQuba can dive up to 10 meters, which makes it a proper, fully functional James Bond machine. 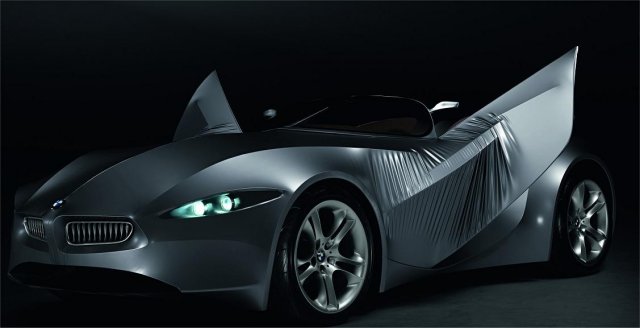 Chris Bangle’s era at BMW was marked by great controversy regarding design, but no one can deny that the BMW GINA (Geometry and functions in ‘N’ Adaptations) concept is an amazing piece of engineering. To create the bodywork of the car, BMW used a special kind of fabric that’s stretched over a more or less conventional aluminum and carbon frame. The shape shifting fabric body makes the GINA seem almost organic, with skin instead of body panels, and that makes it unique and completely out of the box, even in the world of concept cars where alternative thinking is a must. 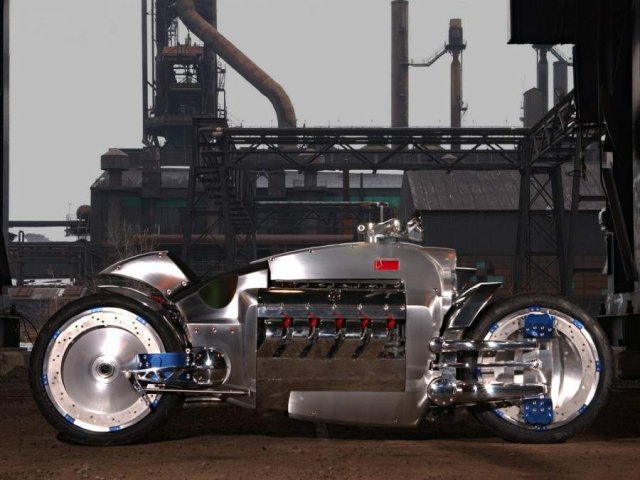 2003 Detroit Motor Show saw one of the rawest and the most extreme concept vehicles ever made. It was the Viper SRT10 V10-powered Dodge Tomahawk, a motorcycle with four wheels and a hypothetical top speed of between 300 and 420 MPH. In reality, the Tomahawk was a rolling sculpture and a vehicle that wasn’t actually meant to be driven, but its bold design and the idea to create a V10 motorcycle makes Dodge Tomahawk one of the craziest concept vehicles of all time. 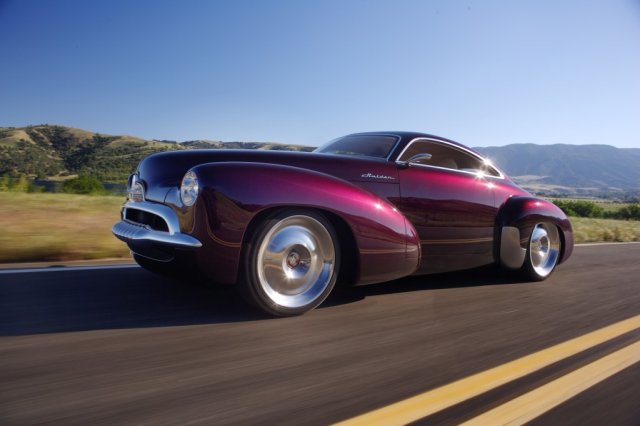 Instead of looking at the future, Holden saw the inspiration in the past, creating the Efijy in 2005. This modern led sled was based on the Chevrolet Corvette and was built as an homage to the Holden FJ, the second car built by the company. Design-wise, the Efijy was a true retromodern icon, and as one of rare concept cars to take the past so seriously, it’s a perfect car to round this list up.