You can’t call yourself a car enthusiast if you’ve never heard of Gumball 3000 supercar rally. Since 1999, this annual event has done more to promote car culture and lavish lifestyle than all hip hop music videos filled with pretty girls, gold chains, and fast cars. If you have at least a drop of gasoline in your blood, you must wish to participate in this crazy circus which covers 3000 miles in just 7 days and finishes every day of the trip with parties with celebrities at expensive hotels. Yes, we know that it sounds like a car guy`s wildest dream and for most of the time it is, but there is a lot more behind this flashy image. We have compiled a list of 16 facts from the history of Gumball 3000 rally which will blow your mind and really explain what this event is all about. Some things on the list you might know already, but some you don’t. Some things you might find funny, yet some are sad, but it all shows how crazy and epic Gumball 3000 really is and what makes it so special and popular. 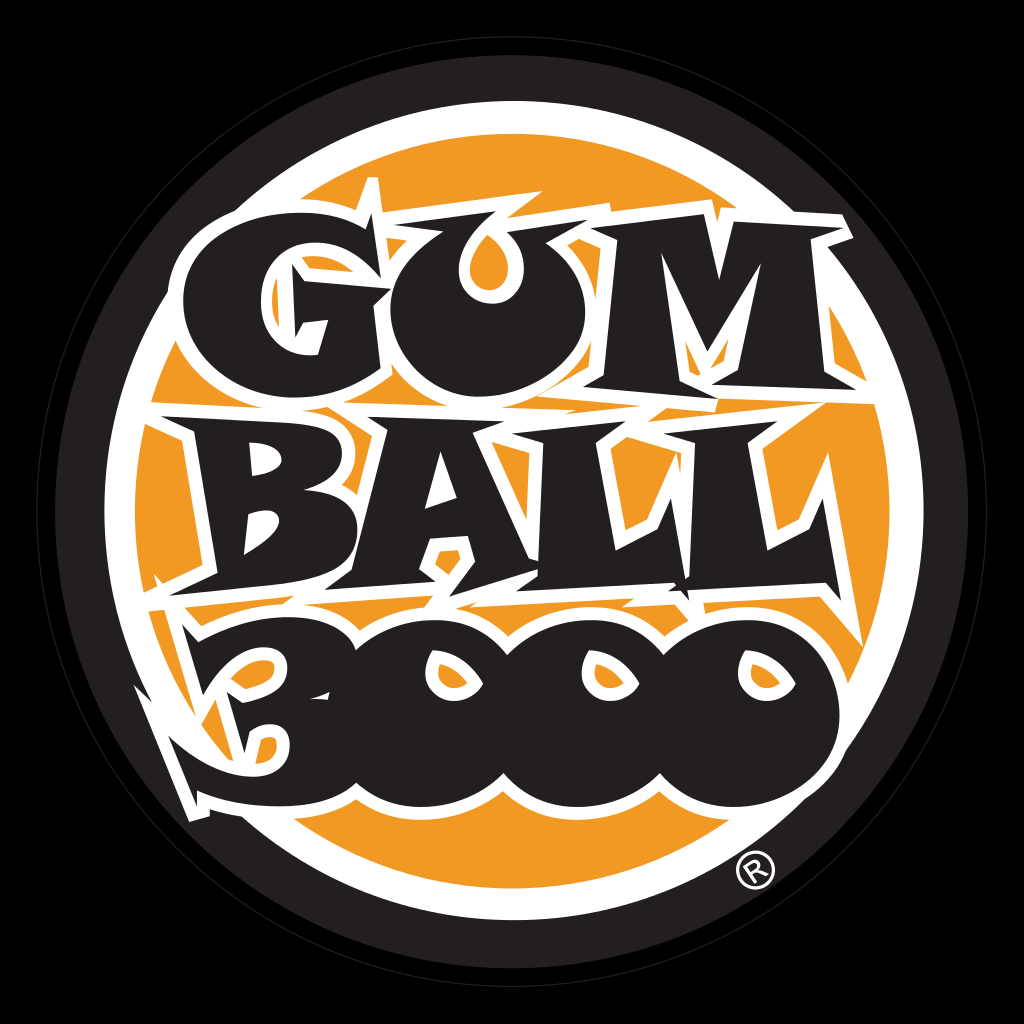 The first Gumball rally was held in 1999 and was organized by English car enthusiast, Maximillion Cooper. It was promoted by the name Gumball 2000 but as the year 2000 came and passed, the name has been changed to Gumball 3000 makes a lot more sense. Max Cooper got the inspiration and the name from a car movie classic “Gumball Rally” (1976) in which wealthy car enthusiasts race across America in a brutal road race to win a gumball machine and bragging rights. Cooper envisioned a similar scenario, but only on European soil and with celebrities and parties every night in different cities along the route, a recipe that has not been changed to this day.

2. To participate in Gumball 3000 you will need a lot of money 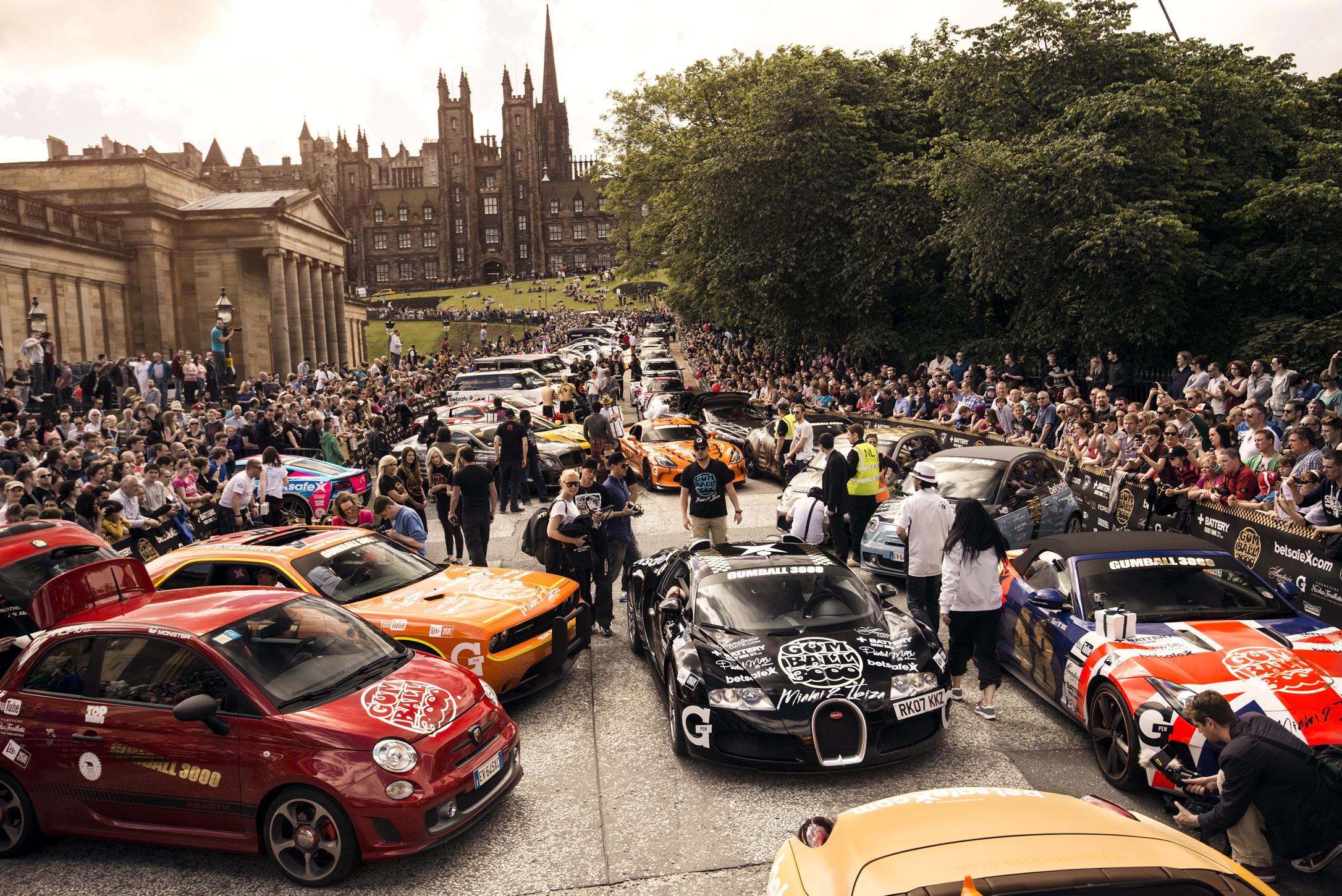 The exact price of the admission has never been publicly announced and varies from the year, route and various other expenses like visas, hotels, plane tickets etc. However, it has been known that 2008 Gumball 3000 rally participants paid $120,000 per car! Of course, that price didn’t include your own ride, gas or speeding tickets. For 2009 Gumball 3000 rally, the price dropped to $44,000 because it was held in America and the participants did’t need multiple visas, plane tickets or transport airplanes to take the cars from one continent to the other. How much you will have to pay to enter 2017 Gumball is anyone’s guess but expect it to be over $50,000 since it will be held in Europe only.

3. Every Gumball rally lineup of cars is worth close to $100 million! 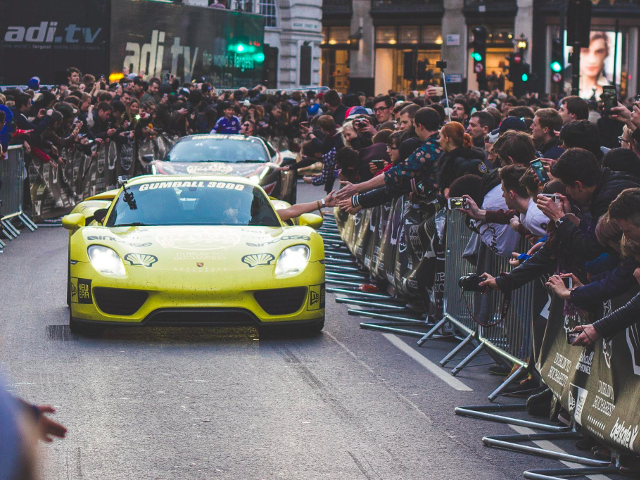 OK, maybe not the first couple of events but in 2006, the estimated price of all the cars which participated was over $100 million. That is an unbelievable sum of money but if you looked through the cars which were present at the rally, you would be able to understand: Ferrari F40, F50, and Enzo with priceless classics like 275 GTC and 250 California Spider, three Bugatti Veyrons and 13 Mercedes SLRs. Of course, not to mention countless Lamborghinis, Aston Martins, Porsches, and Rolls Royces. 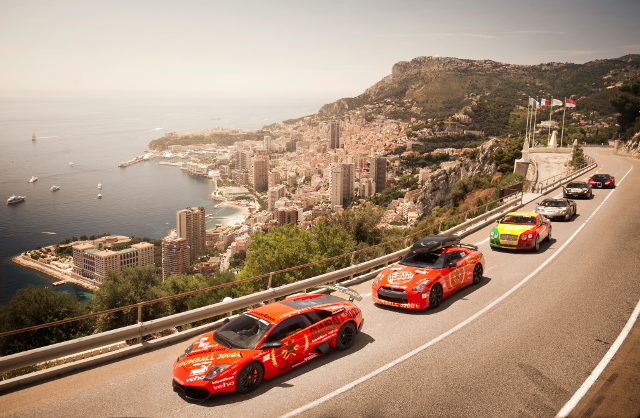 As we said before, the route is always 3000 miles long. However, the highest mileage Gumball rally was in 2004. That year, 220 cars participated, counting the support vehicles also. This brings us to an astonishing figure of 660.000 miles which had been covered by the all the participants in just one week.

5. Not all cars are high priced and super fast exotics 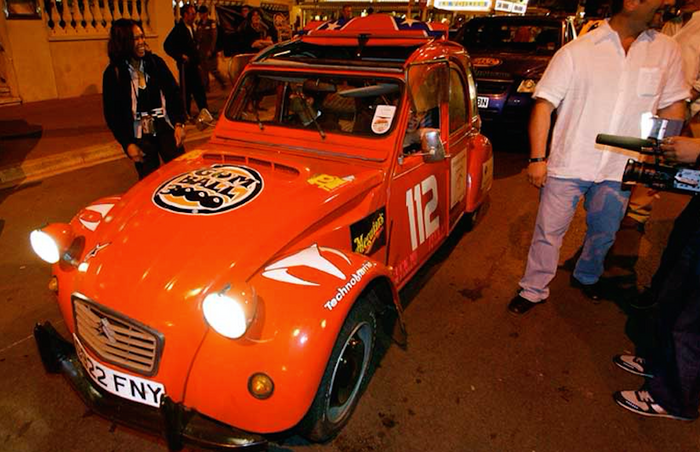 Despite the fact that Gumball 3000 name is closely tied to the image of immensely powerful hypercars worth millions of dollars, there were a few occasions when very modest machinery was present. In the 2004 event, Citroen 2CV was on the grid looking pretty desperate with 29 hp. It won the slowest car award but the audience also remember an ice cream van which was somewhat more powerful but not much faster. It must have been impossible to keep up with the Ferraris on the motorway in that.

6. Not all cars are brand new models 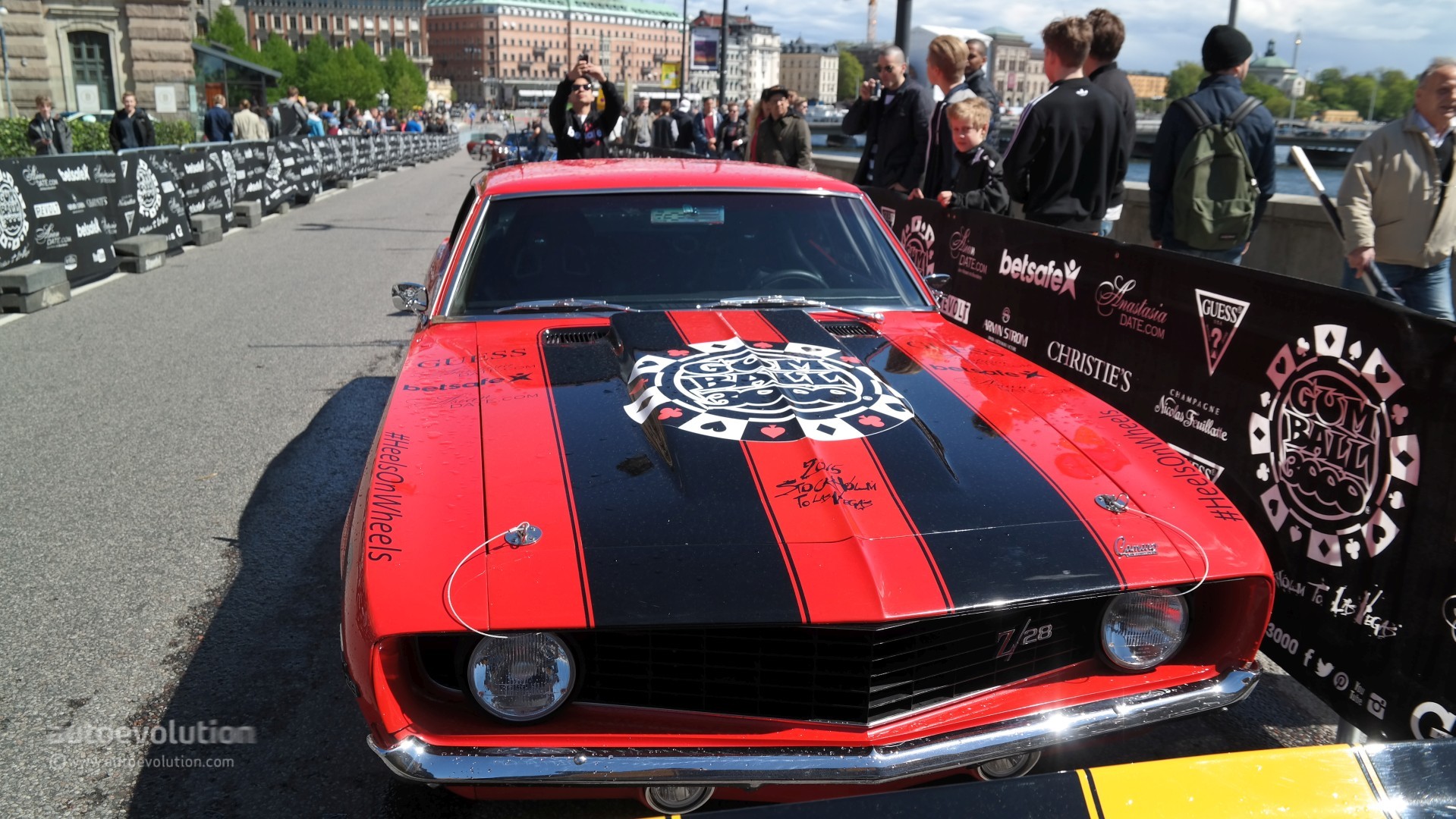 In fact, some of the most memorable entries were not even from this century. The oldest car which entered Gumball rally was a beautiful 1929 Bentley 4½ Blower which was driven by late Lord Montagu, the famous British car enthusiast. Besides the Bentley, there were numerous other classic cars like the Volkswagen T1 Van, classic Ford Mustang or Lamborghini LM 002. But the most expensive and most interesting older vehicle was the McLaren F1 LM built in 1998. Last year one of five ever made entered the Gumball rally. You might be interested in the price tag of such a vehicle, a cool 13.2 million dollars judging by the current market trends. 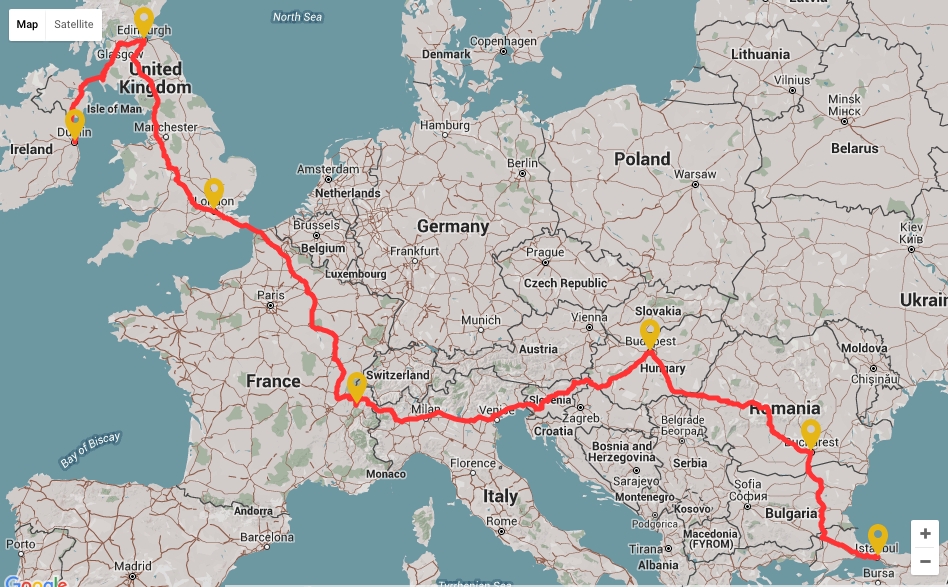 In the last 18 years and 17 rallies held, Gumball caravan has visited 38 countries on four continents and covered millions of miles. Some rallies, like the 2006 event were held on three continents. The 2006 Gumball 3000 started in Europe continued in Asia and finished in America. By now, Gumball has been in 20% of all countries on the globe so there is still a lot more to do. 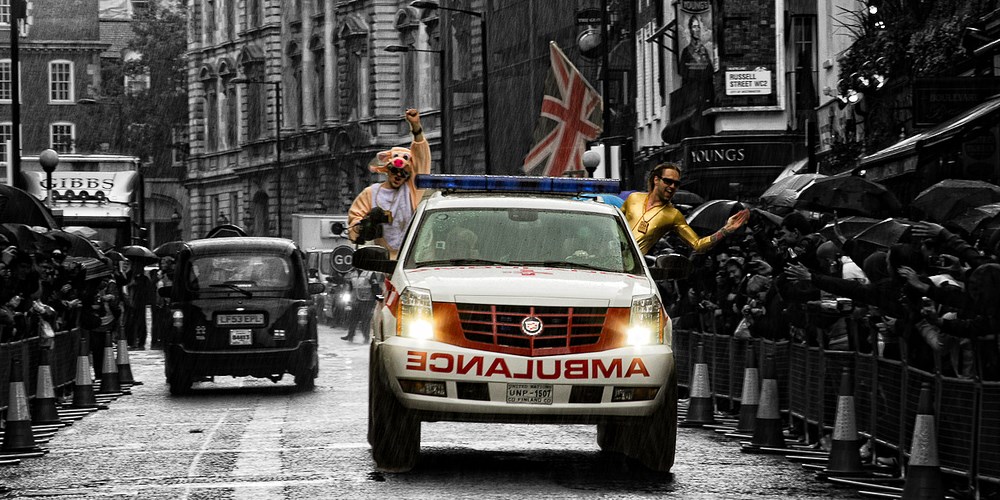 Since Gumball is so much fun and every event has a different route, it is a quite unique experience which can never be repeated. That is why a lot of participants are returning and entering year after year, regardless of costs. Besides the founder Maximillion Cooper, there’s only one person who had completed all 17 rallies, and it’s fashion designer Karta Healy. He has covered over 50,000 miles on Gumball and has been a part of the legend from the very start. 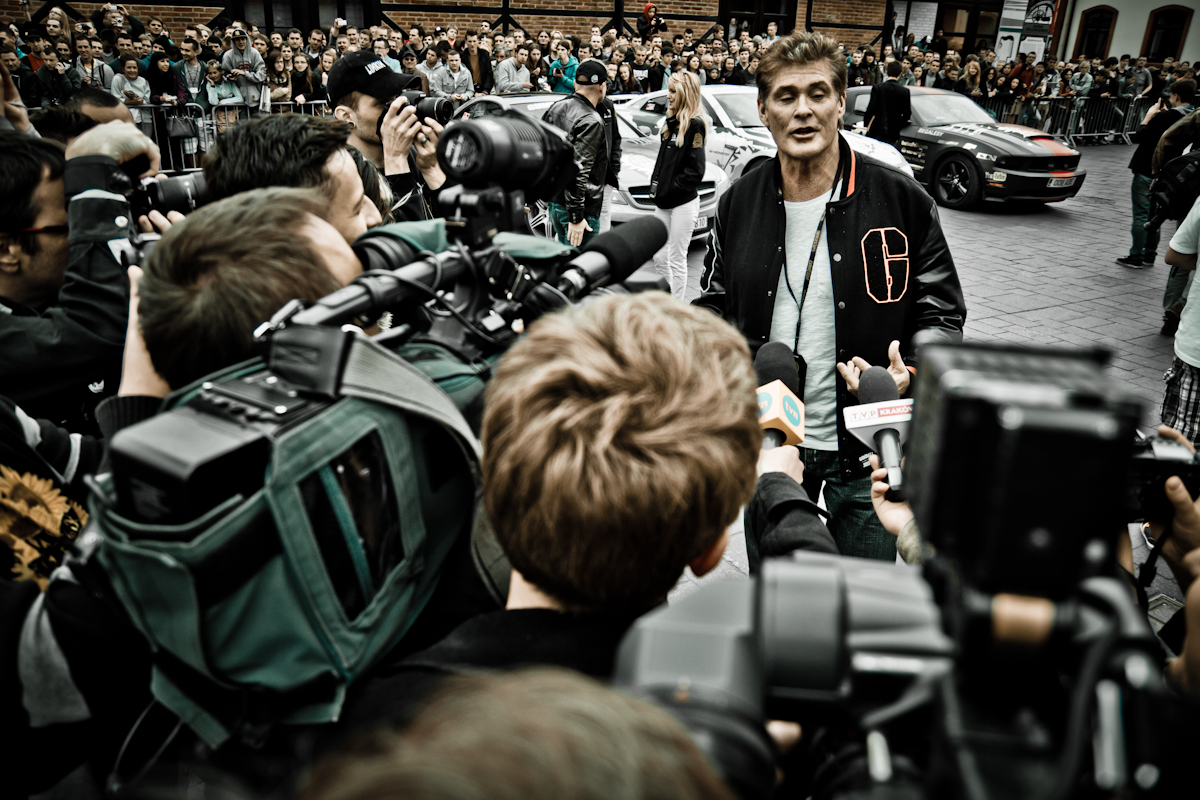 From the very beginning of the Gumball saga, celebrities were a big part of the event. First as attendees of wild parties which marked the start or the end of the rally, but soon as the participants. From 2001, celebrity participants included famous actors, fashion designers, reality TV stars, musicians, models, athletes and much more. Let’s run a couple of names and you will see what we mean. Actor Matthew McConaughey, Travis Pastrana, rapper Xzibit, skateboard legend Tony Hawk, Adrien Brody, model Jodie Kidd, David Hasselhoff and Michael Madsen to name just a few famous participants which entered the rally over the years.

10. The first rallies were very competitive 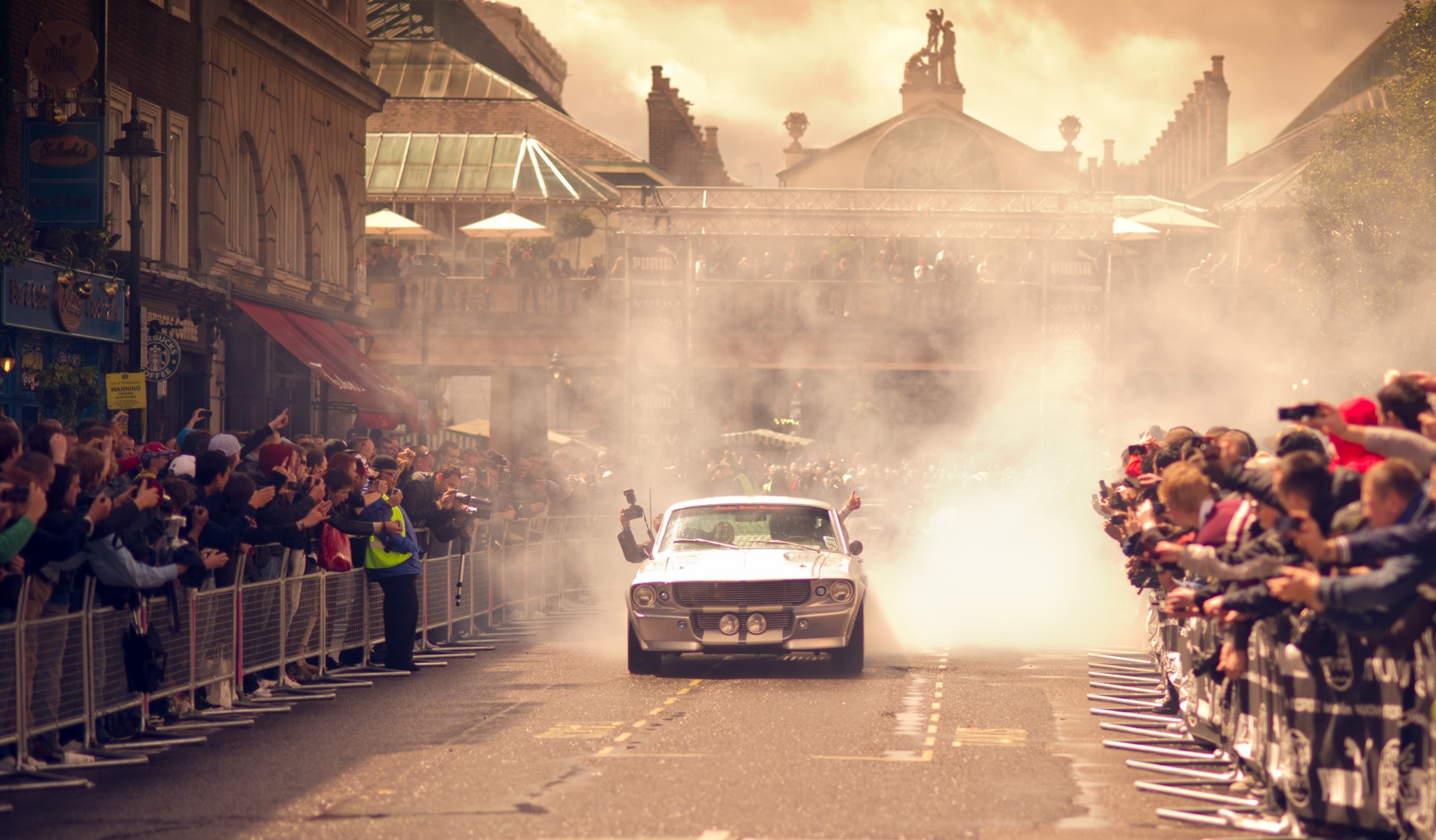 It is less known that the first couple of rallies in the early 2000s were very competitive and the Gumballers really raced each other on public highways. Winning a Gumball rally was considered a big achievement and it meant that you were not only the fastest but also lucky enough not to crash or get arrested. The competitive aspect of the Gumball has been abandoned after tragic events of the 2007 rally.

11. Some teams invested in hi-tech radar jamming and radio equipment 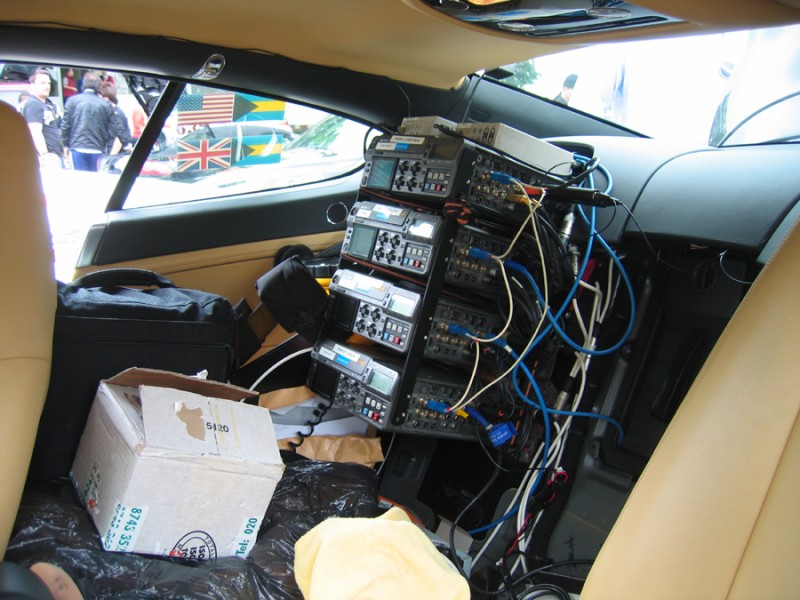 During those wild first couple of years, teams like Alex Roy’s Team Polizei or Team Torquenstein invested a lot of money and time into buying and installing state of the art radar jamming technology which allowed them to be one step ahead of the local police. Since those teams were highly competitive and planned to drive flat out, they were in constant danger of being stopped or arrested by the police. However, advanced electronic equipment helped them know where the radars are, are there any police cars following them or if their speeding has been reported. 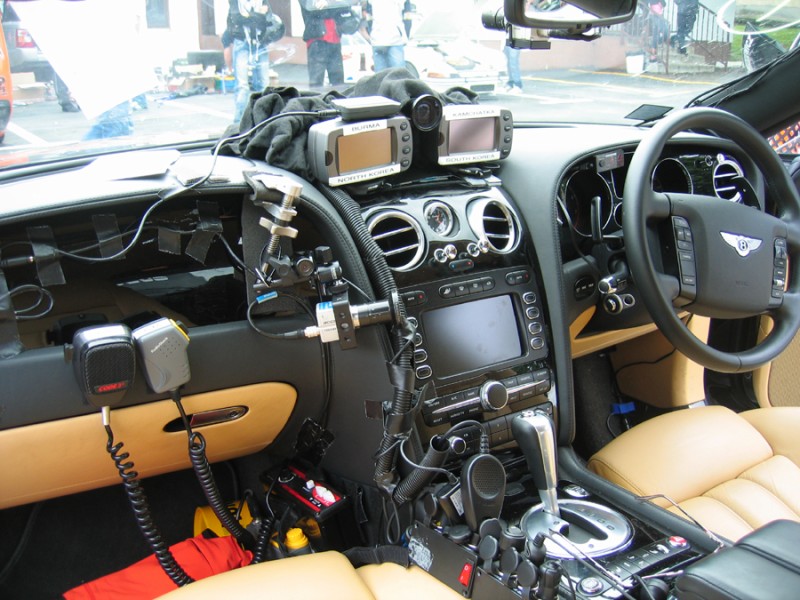 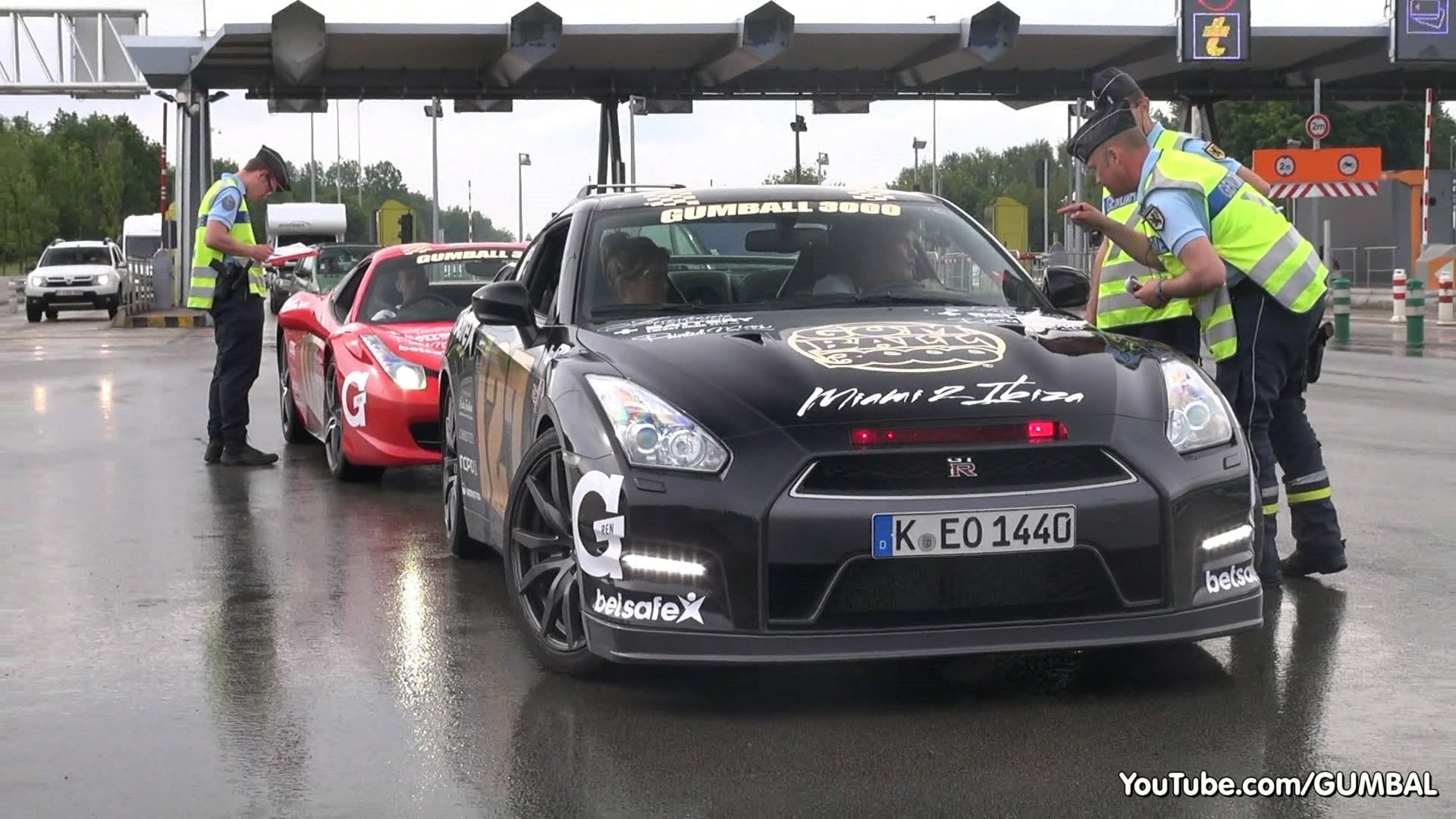 Before the rally became a popular and highly publicized event, speeding Gumball participants were often arrested, of course, if they got caught. Sometimes, celebrity drivers were involved, like Michael Madsen who got arrested in Belgium in 2010.

13. Crashes were a common thing 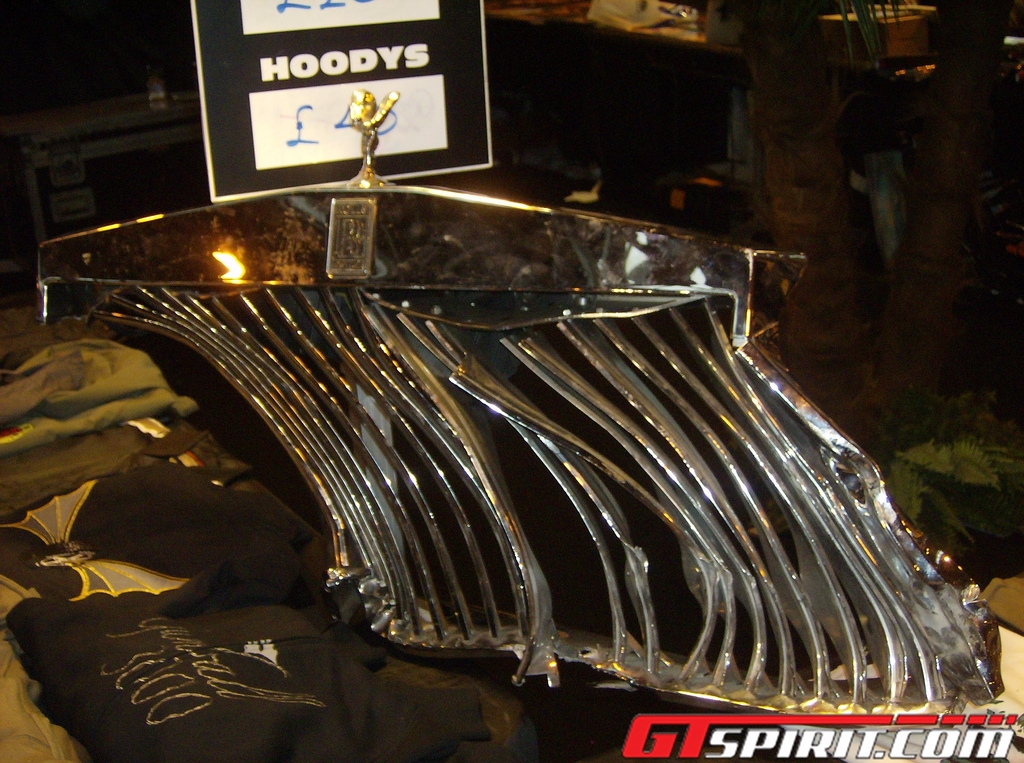 As expected, fast cars and a full dose of adrenaline after a night of partying can result with skidding off the road and Gumball had its share of crashes. Sometimes, very serious accidents with injuries happened and participants were rushed to the hospital. Fortunately, no Gumballer has ever died as a result of rally crash. Among many crashes, one of the most interesting ones happened in 2006 near Novi Sad, Serbia when a Rolls Royce Phantom crashed into a highway barrier. The crash was’t serious and passengers were’t even scratched but the rest of the participants picked up bent Rolls Royce grille and it was later presented as a winner’s trophy at the Playboy mansion party in Los Angeles. 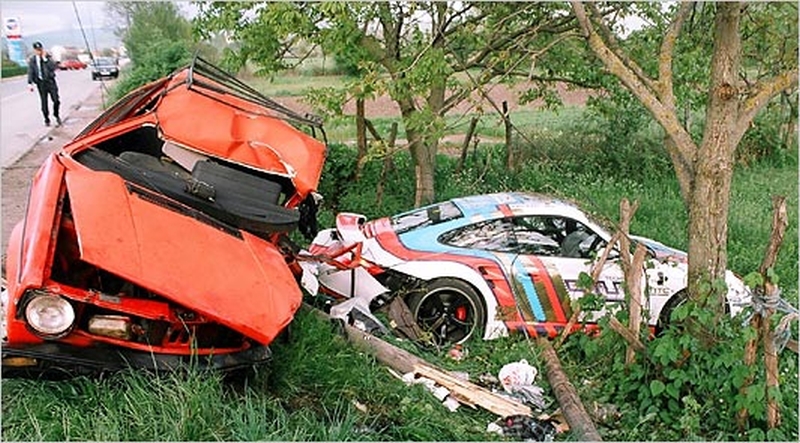 In 2007, during Macedonian leg of the rally, Porsche 911 Turbo driven by Nick Morley and Matthew McConville hit a Volkswagen Golf carrying an elderly couple. The driver was killed on the spot and his wife died two days later. Morley and McConville left the crashed Porsche and fled the scene of the accident in a BMW M6 driven by a fellow Gumball participant but they were arrested at the border. After the news of the crash got to the organizers, the decision was made to stop the rally out of respect for a tragically killed couple. After that incident, the press started an attack on the organizers accusing them of endangering innocent motorists with their reckless driving. 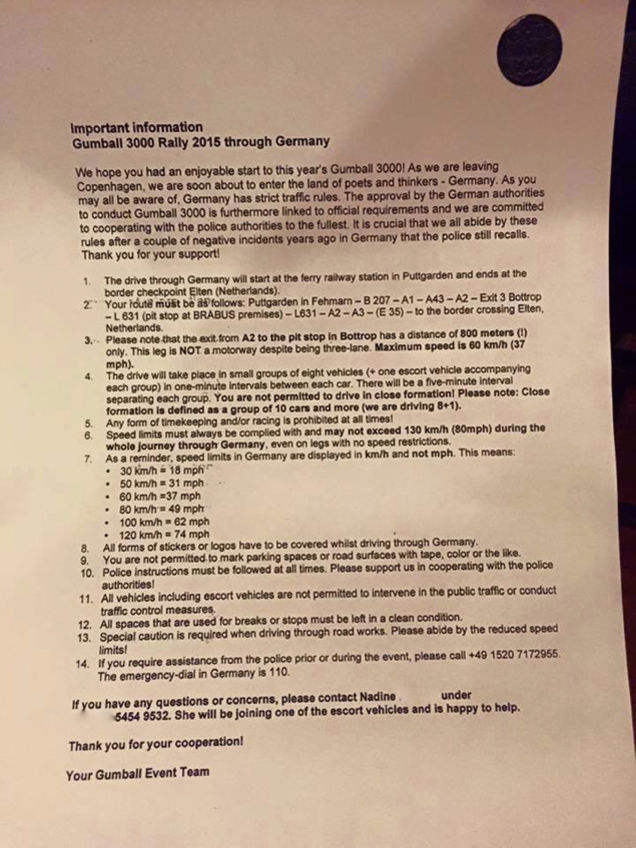 Germany is one of the very few places on the planet where you can drive as fast as you can on the famous Autobahn highways. However, in 2015, German police issued a statement which clearly forbids any speeding above the regular speed limit, displaying any logos or decals, driving in a formation or stopping. The Gumball participants were forced to behave like ordinary motorists or else they would be arrested. Since nobody wanted to question the authority of the German police and didn’t want to have their car impounded, everybody obeyed and the rally passed through Germany largely unnoticed. Some say that this behavior of German police will influence other law enforcement agencies and that the speeding days of Gumball rally are over. We shall see… 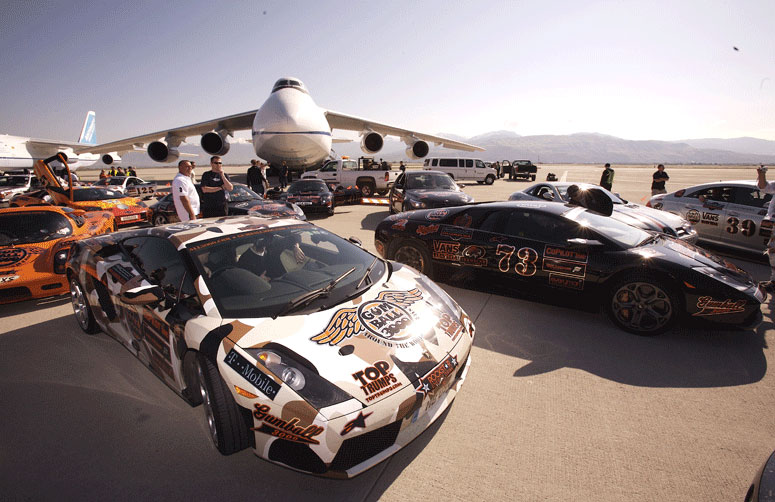 So far, organizers of the rally used the biggest transport airplane in the world, the Antonov An-124 to transport the cars from one continent to another. Of course, this kind of service doesn’t come cheap and in 2006, the organizers chartered 3 such aircrafts to transport 120 cars from Europe to Asia. The cost of renting one plane was 1 million dollars and they needed three, so do the math.