20 Best Convertibles For Cruising In 2017

Summer is here and that means two things. The AC will be on most of the time and you will start regretting that you didn’t buy a convertible. And that is why we are here to bring you the list of 20 best convertibles for cruising this summer and help you decide while you still have the time. The convertibles, in general, are the one class that endured everything and still stayed relevant in the 21st century. Over the years convertibles were even banned due to tightening safety standards and almost extinct at one point. But love for open air driving and enjoyment that only open top cars can deliver won and today we have many interesting cars on the market. The biggest revolution in this segment came when folding hard tops were introduced in the early 2000s. The advantages were numerous and convertibles were no longer uncomfortable, poorly isolated, noisy and easy to break into. In fact, they were as safe and comfortable as regular coupes. For a moment, it looked like all models will feature futuristic, metal hard tops that will go down in a matter of seconds. Interestingly, that didn’t happen and soft tops still remained a popular choice among convertible buyers simply because they look cool, have a vintage feel and with the advances in modern technology, offer acceptable levels of comfort and isolation. Today, we are going to present you 20 of the best and most interesting convertibles on the market. The list consists of cars that are very different from each other in terms of power, speed, and price. But they have one important thing in common and that is that all those cars provide blue skies above the driver’s head, perfectly capturing the essence of open top driving. So, let’s go. 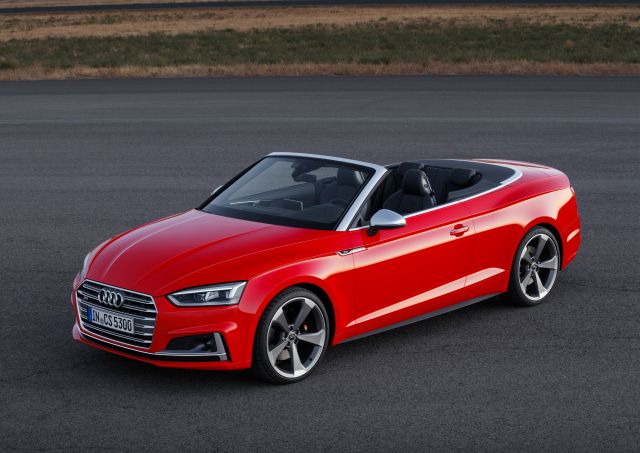 Mid-size Audi’s open top cruiser comes in a few flavors and power levels, but the only one you should consider is the mighty S5. This model will combine a powerful 354 hp V6 engine, Quattro all-wheel drive system, luxury interior with the elegance of top-down cruising. The S5 is fast, good looking, sleek and can sit up to 4 people, so it is perfect for summer road trips. Of course, there is a matter of price and for this piece of German engineering, you will have to pay $62,000. 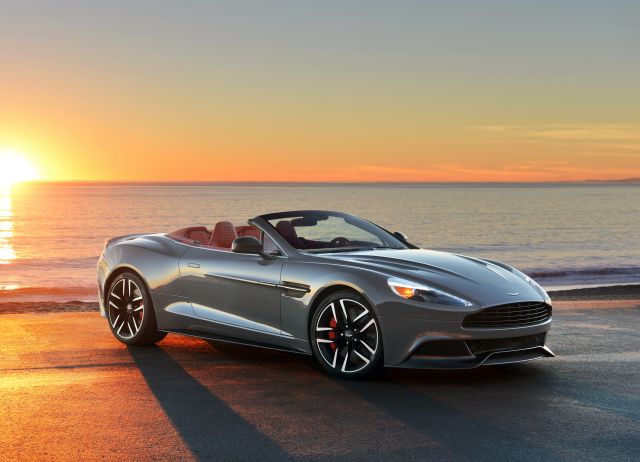 Legendary British manufacturer of high-end sports cars has several solutions for your summer cruiser problems. One of the most elegant, exquisite and simply gorgeous ones is the Vanquish Volante. It is powered by a 6.0-liter V12 with 603 hp and it boasts the finest leather, interior materials and it is capable of outrunning almost everything on the road. The price is astronomical and just short of $300,000, and the overall experience is well worth it. 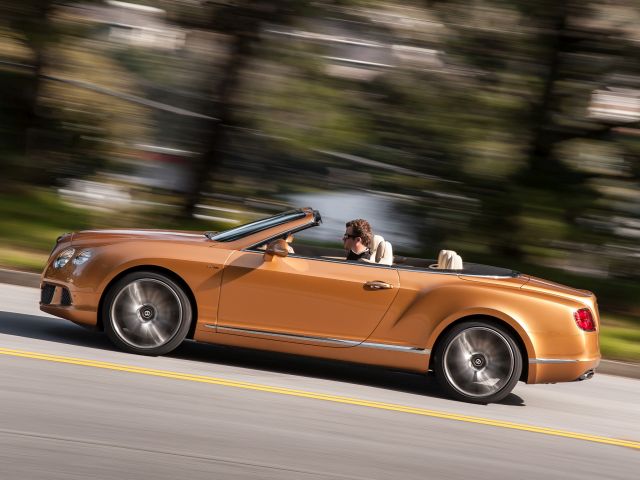 The Continental GT is kind of a gold standard when it comes to luxury coupes or convertibles. In open top form, it is a big, powerful and comfy cruiser capable of going very slow, but also running pretty fast due to the fact it is equipped with 590 hp W12 engine. No matter how what speed you chose to go, you will never lose the sense of luxury and quality and since this is a real four-seater, you can have company while cruising the coastline. With the price of $200,000, unfortunately, it is out of reach of many customers. 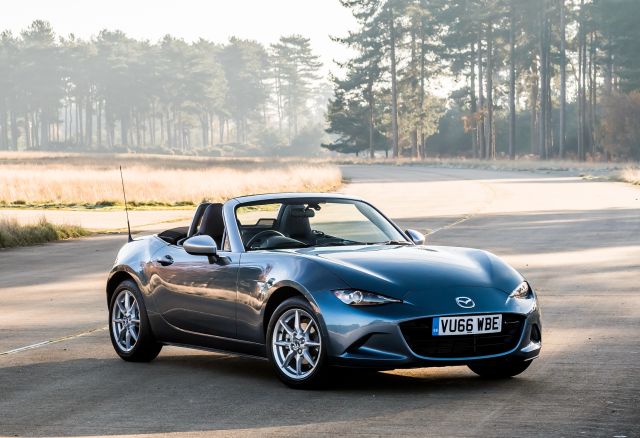 If you want something cheaper and lots of fun, then Miata has to be your choice. For years it has been one of the best-selling convertibles on the market and a very fun car to drive. If you want to go for a spirited drive down your favorite mountain road and feel everything, jump into the Miata and let its 155 hp engine show you what real convertible driving is all about. The price is pretty affordable at $26,000. 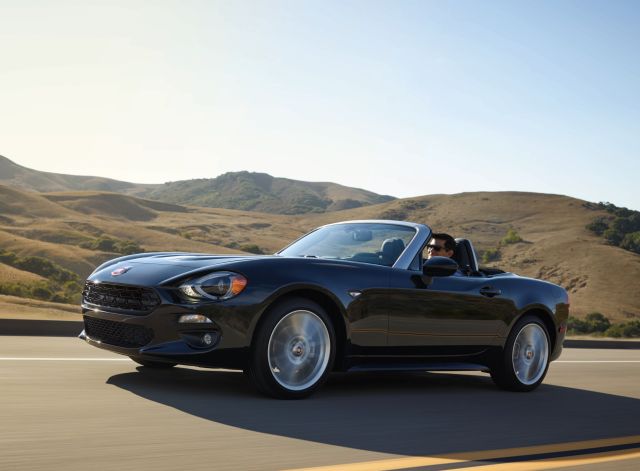 The 124 Spider is actually the Miata with Fiat badge since the two share the same platform and suspension and much of the components too. However, they are not similar in driving experience since the Fiat has a small 1.4 turbocharged engine, a few extra horses, and different suspension tuning. Still, it provides plenty of excitement in driving and vivid performance. The price is almost identical to Mazda’s at $25,900. 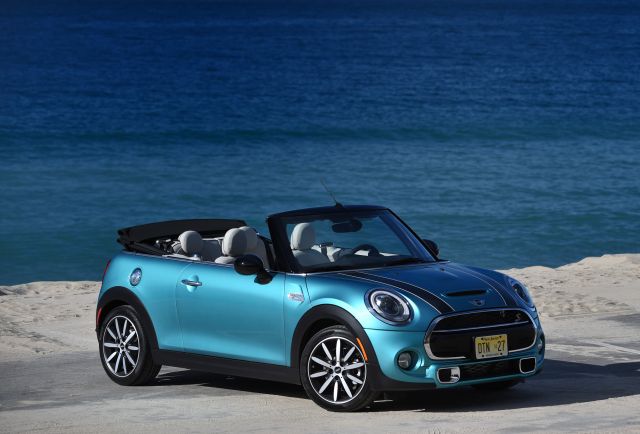 The Mini is a perfect urban runabout and in convertible form, it is even better. With its compact dimensions, it isn’t the most comfortable ride, but it is good enough for city driving and short highway runs. If you choose the Cooper S version you will get a 189 hp engine and pretty lively performance as well as nice exterior details and a cool paint job. The prices start at $30,000 for this little dynamic open top. 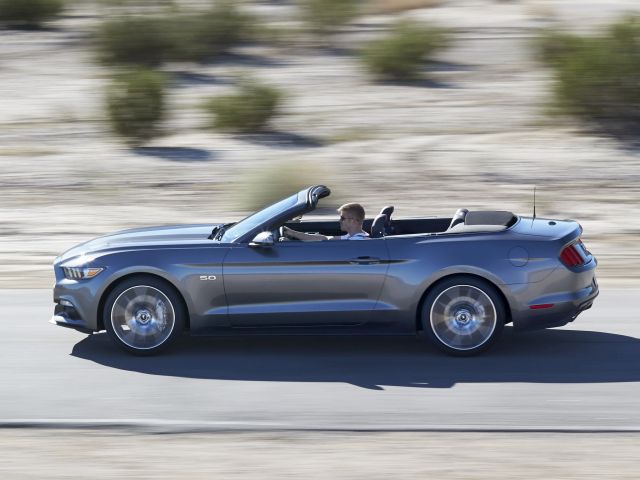 One of the classics of the convertible genre, the Ford Mustang has delivered open-air thrills since 1964. In its latest incarnation, it is better than ever with a 315 hp turbocharged four or 425 hp naturally-aspirated V8. We suggest you take the V8 since the soundtrack is fabulous. The prices start around $34,000 for a convertible version which is great value for money. 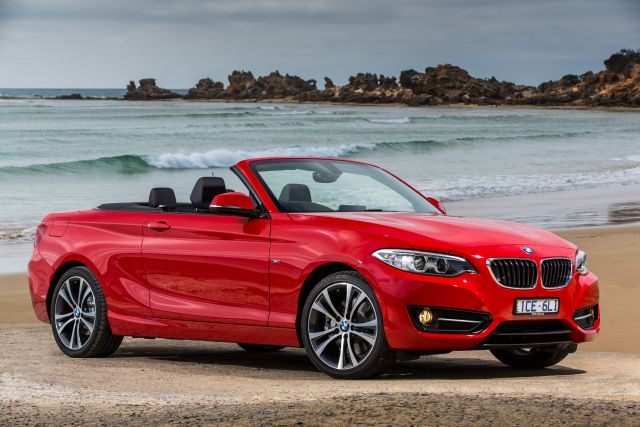 One of the truest BMWs currently on market is a small but very fun, 2-Series which is also available as a convertible. The compact dimensions, powerful engines, perfect handling and precise steering makes this car a driver’s favorite. The power ranges from 248 to 335 hp and you can get either manual or automatic transmission. It’s a perfect car for fast driving and twisty roads. Prices start at $35,000. 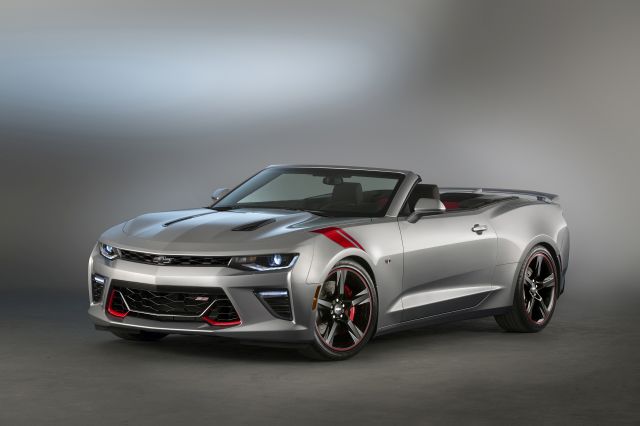 True open top muscle car, the Camaro has all predispositions to be a great summertime cruiser. It has great chassis, powerful engines, strong performance and aggressive design. This combo works well whether you’re cruising the boulevards or running down the drag strip. You should choose the venerable 6.2-liter V8 with 455 hp and enjoy the glorious sound as well as lightning fast acceleration. The prices start at $37,000. 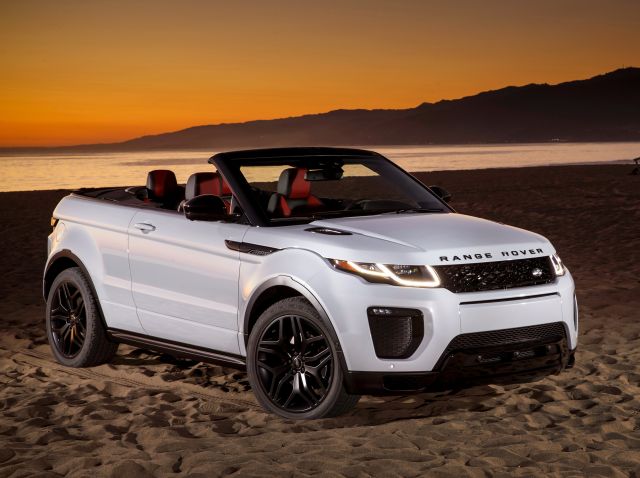 The Evoque Convertible is a pretty unique car in today’s market because it is the only convertible SUV currently on sale. It is the answer to the question nobody asked but it looks like fun and if you want an SUV but you crave for open top car, then this is the one. For $42,000 base price you will get a 240 hp turbocharged engine, luxury features, and a special vehicle. 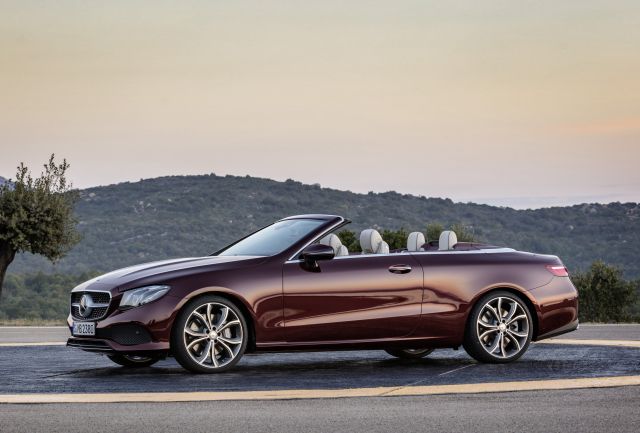 The elegant E-Class open top is not the sportiest solution but is one of the most stylish convertibles you can buy. The power comes from the base 241 hp engine which is quite enough for four people to travel in comfort and ease. This convertible is perfect for cruising down the coastline highway or strolling through the city. The base price is somewhat high at $53,000. 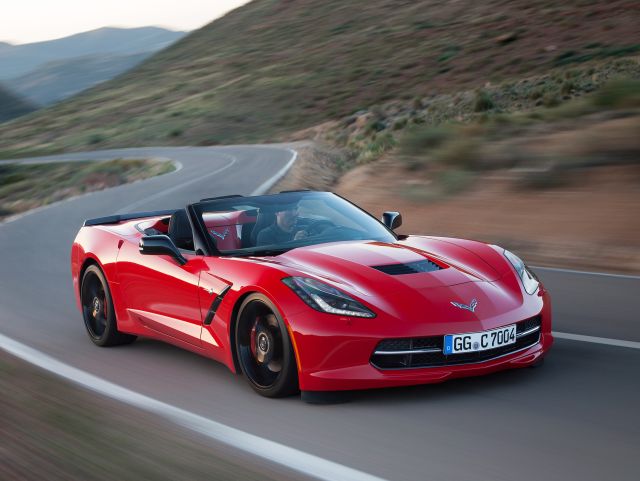 The legendary Corvette is not only America’s greatest sports car but also a global icon of speed and power. In the C7 generation, it is universally praised as one of the best everyday sports cars you can buy. This means that the convertible version is also among the best and this is really true. Great chassis, serious performance, and aggressive looks make the ‘Vette an open air favorite. The 455 V8 is the base engine but you can go up and the $56,000 base price doesn’t seem that much when you know you’ll be getting one of best sports cars around.

The beautiful F-Type is exactly what we wanted from Jaguar. Brutally fast and stunning sports car with the unbelievable soundtrack from its supercharged engine. You can choose between 340 hp and 380 hp and it doesn’t really matter which one you get since either way you will be driving a tail happy British muscle car. Starting from $62,000 this is one of the most exciting cars in its class. 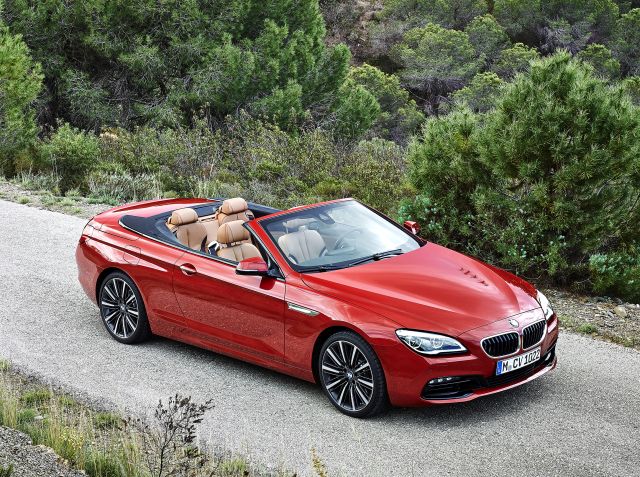 The elegant yet powerful 6-Series convertible is perfect Grand Tourer from BMW. With 445 hp under the hood and serious performance, it is a car that you don’t want to push around the corners aggressively but you know it is more than capable to do so. This is a luxury cruiser, best to be parked beside the yacht or in front of a golf club. The prices start from $67,000 and there is a long list of options and optional engines. 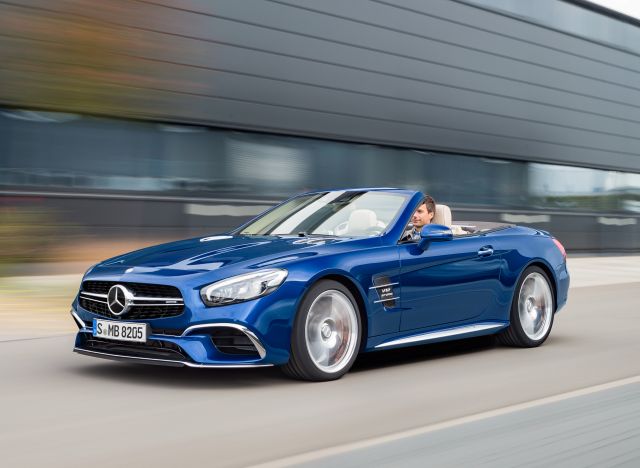 No list of best convertibles would be complete without the Mercedes SL. For more than 50 years, SL has been a synonym for a luxury two-seater and open air driving. 2017 is not the newest offering in its class but is still more than capable of fighting the competition. The prices start at $87,000 and you can choose from 362 hp engine all the way to the mighty AMG version with more than 600 hp. 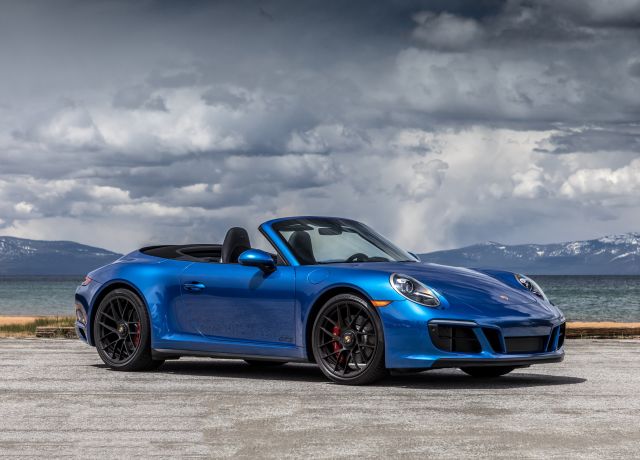 Similar to the Corvette, 911 is a quintessential sports car and a landmark convertible which has been among the best open top cruisers for the last couple of decades. The basic layout hasn’t changed since the introduction and that is a flat-six engine in the back, perfect handling and lots of driving dynamics. For 2017 there are so many 911 variants and you can have two or four-wheel drive, manual or automatic, Turbo, Targa or full convertible and so on. The price starts from $90,000. 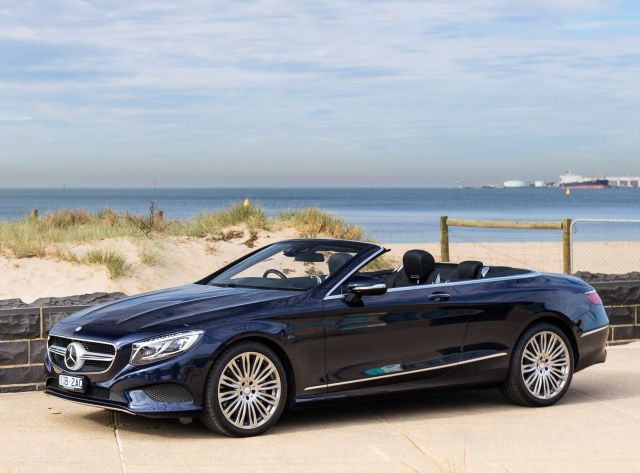 After a few decades, Mercedes decided to introduce a convertible version of their biggest car, the S-Class coupe. The new convertible version is expectedly full of all kind of luxury features and creature comforts and it is ready to fight the competitors in form of Bentley Continental GT. Under the hood is a standard 449 hp engine but you also can upgrade to the S65 Convertible and its 621 hp. The prices are reasonably high and for an entry level model you will have to pay $97,000. 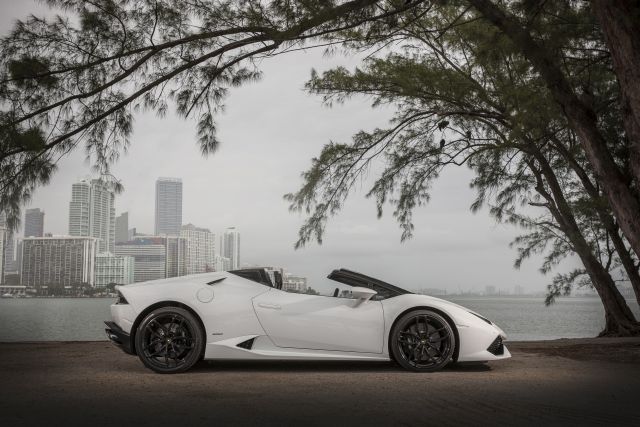 This is just an entry level Lamborghini, but its specifications are out of this world. A mid-engined supercar with 571 hp, sublime performance and no roof sounds like a dream on four wheels, and it is. The driving dynamics are fantastic as well as the soundtrack and the price too. The base price is just over $200,000 and the Huracan Roadster is worth every penny. 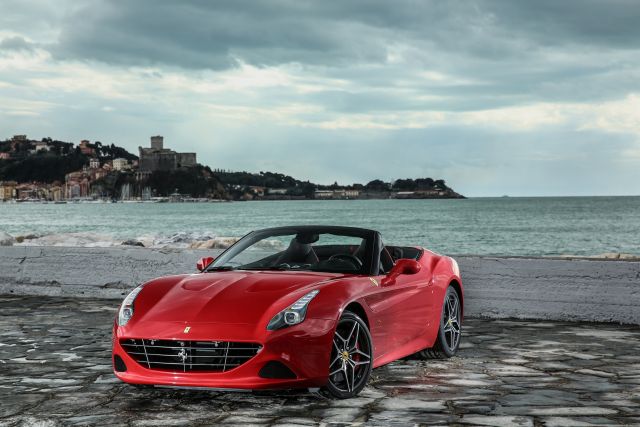 The least expensive Ferrari is, arguably, the most fun to drive thanks to comfortable interior, folding hard top and turbo engine which delivers 552 hp. The Ferrari 488 GTB might be more rewarding and faster but the California T is something you can live with every day and drive in regular traffic. The prices start at $200,000. 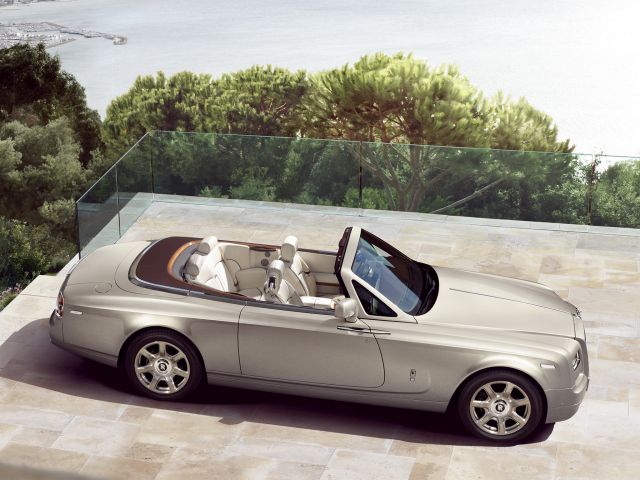 Under this long name hides the convertible version of the opulent, super-luxurious Rolls-Royce Phantom. This is the undisputed king of convertibles, not only by design, heritage, luxury and power, but also as one of most expensive cars on the market at almost $500,000. For that money, you will get a turbocharged V12 with 451 hp, effortless acceleration, and design that is reminiscent to a luxury yacht with wood and finest leather everywhere you look.