20 of the Weirdest Car Accidents

The moment cars became common enough to pass eachother by on the streets, car accidents started occuring. Today, car accidents are an everyday part of traffic all over the world, and while many of them are dangerous, some are just extremely weird, funny and how-did-you-even kind of accidents. We bring you our choice of 20 weirdest car accidents that got our heads scratching. 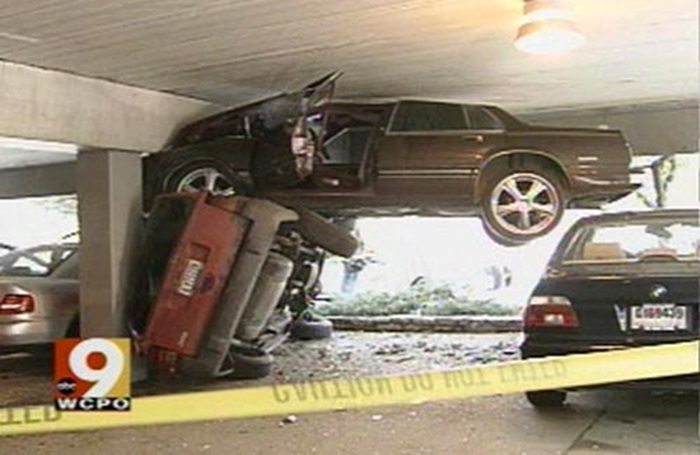 An absolute classic, this parking lot accident is hilarious, yet still unexplainable to this day. The unfortunate driver just rammed his car on a closed parking lot, leaving it stuck between another car and the concrete roof. The crash gained huge media coverage, and the image quickly went viral, and there’s really no need to explain how and why, as accidents as weird as these happen once in a blue moon!
Prom crash 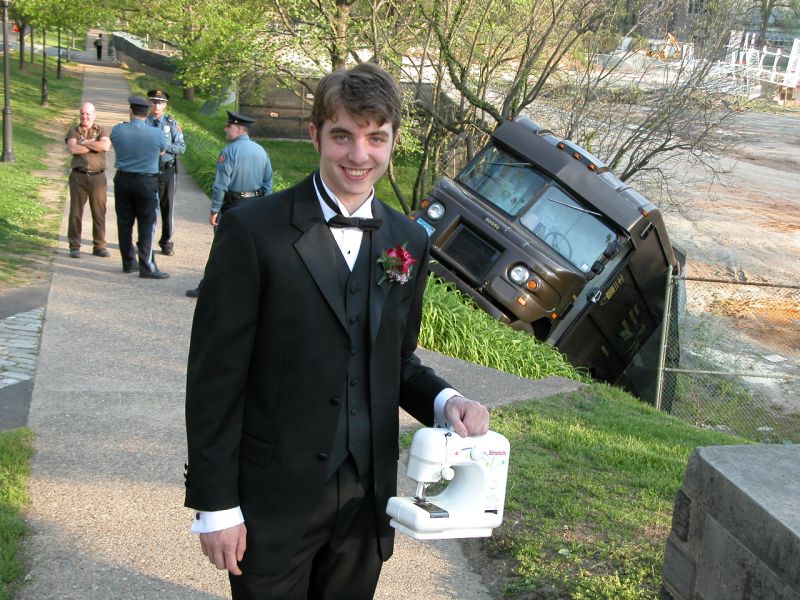 A classic one too, this RV accident is pretty ordinary compared to the others on the list, but this kid in his sloppy prom suit holding a compact sewing machine makes it a blast! The image is completely unexplainable and his somewhat sinister smile even makes it a bit unsettling.
Wired up 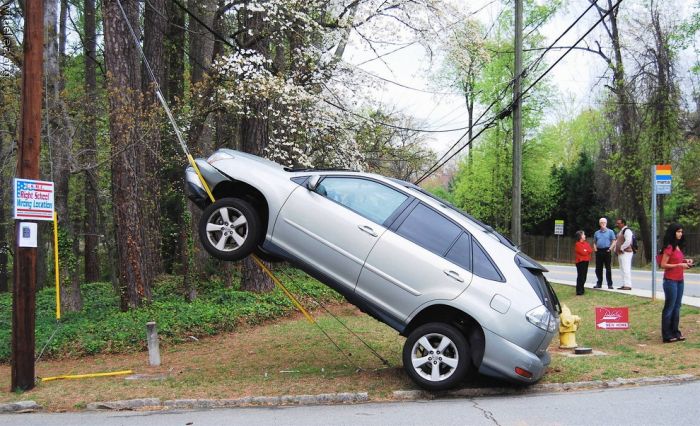 Cars hanging from telephone poles always keep us wondering how on Earth could that happen to anyone. What does one driver need to do to hang his car like that? We still don’t know, but what we know is that accidents like these actually happen more often than we think, and that they are always baffling and funny.
50-50 the rail

Driving a skateboard and driving a car takes a set of completely different skills, and if you try to mix them up, you might end up grinding the highway guardrail. In skateboard culture, 50-50 is considered a basic grinding trick, but in the world of cars, it is a pretty embarrassing accident to get into, and that’s what happened to this careless BMW Series 5 driver.
Door to door 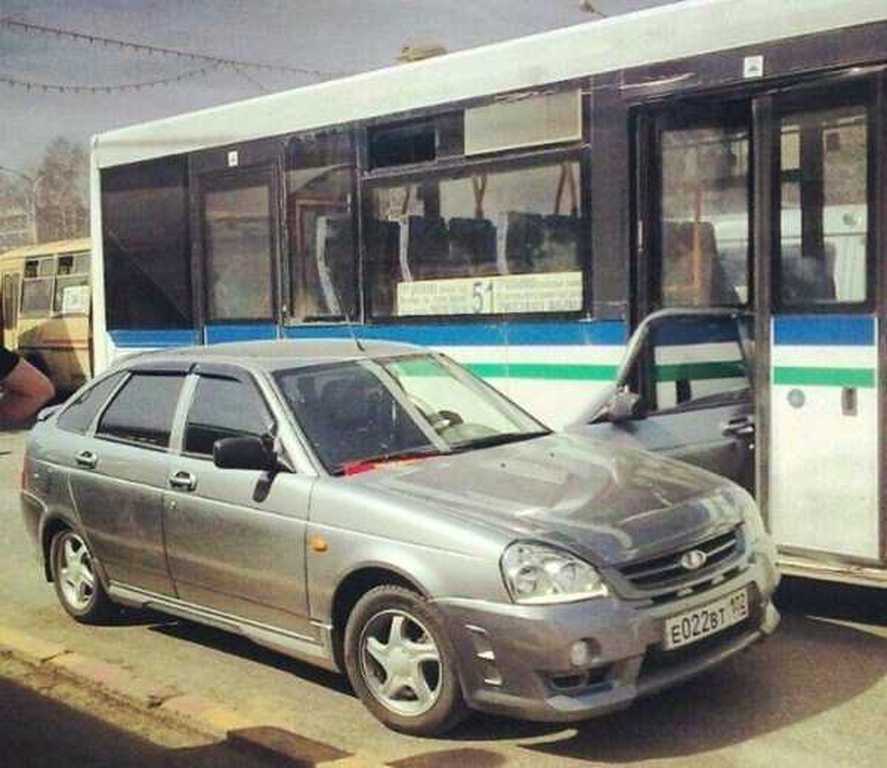 When stopping on the side of the road, a driver always has to be careful of the oncoming traffic when opening the door. In Russia, one unfortunate driver managed not only to get his door crushed, but caught and torn by the hydraulic door of a bus. On top of that, his misfortune was immortalized by this photo which will always remind him of his carelessness.
Nature strikes back 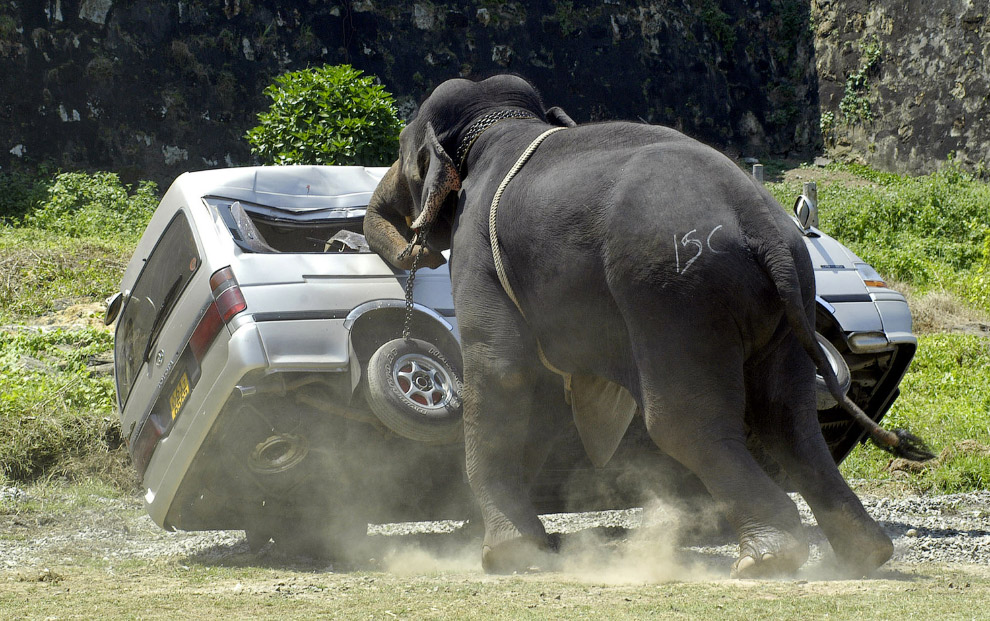 Before cars, people rode on animals’ backs and in animal-ridden carriages as a basic means of faster transportation. However, even after the car was invented and it became affordable in all corners of the Earth, people still continued torturing animals just to get a ride from time to time. But, elephants remember. Oh yes, they do. And here we see a chained elephant doing his part in a big Mother Nature’s payback by trashing an MPV with the help of his sheer force.
A guardrail tail 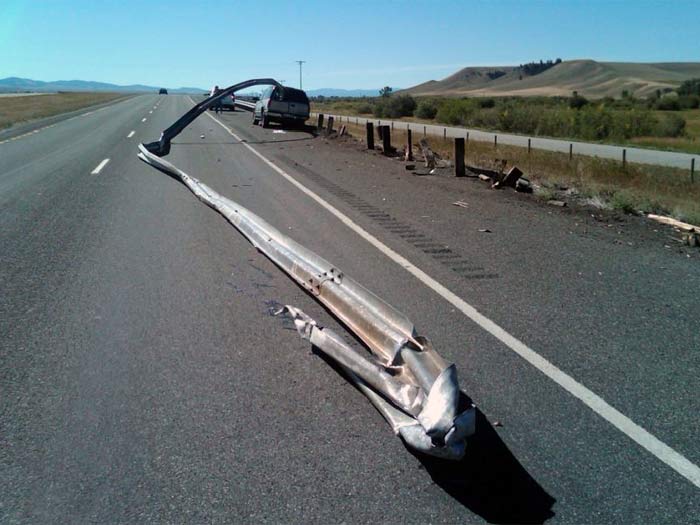 This Chevrolet Suburban driver was extremely lucky to avoid several meters of sharp metal guardrail that went all the way through his car and way behind it. The driver was texting and driving, and that’s what caused the accident that could result in serious injuries, but luckily didn’t, only leaving this unsettling image as a good educational material for generations to come.
Sinkhole nightmare 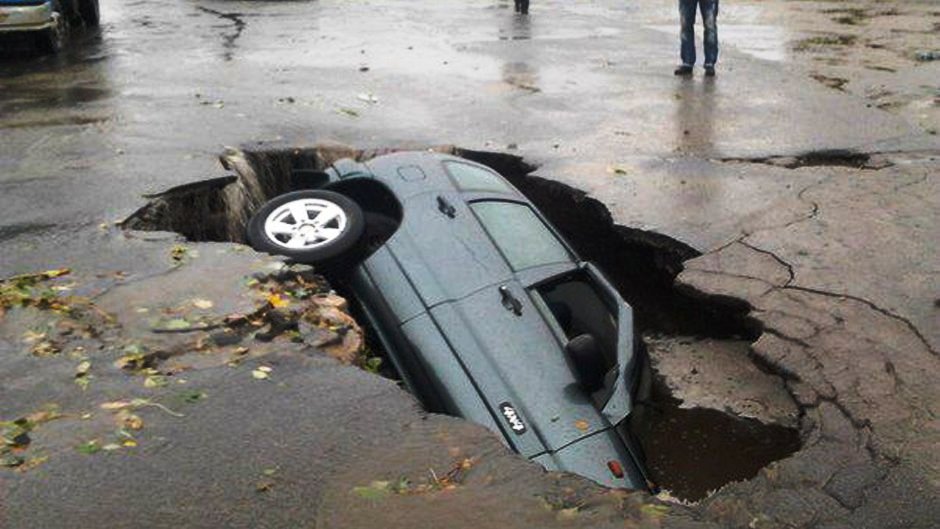 Sinkholes appear from out of nowhere, mostly due to underground waters and bad road quality, and when a car gets near the danger zone, it can lead to pretty baffling results. Here we can see a car in Russia swallowed by a massive sinkhole that appeared in the middle of the road. Sinkholes are one of the most dangerous causes for an accident since they are unpredictable and leave nothing but luck to the driver who gets near one.
A stack of Porsches

Racing crashes are usually ferocious and sometimes heartbreaking, but this one was just weird and hilarious. During the GT Tour Navarra in 2015, two Porsches collided in the strangest possible way, stacking up one on top of the other like toy cars. The image of two cars being piled up so perfectly is still baffling, and it’s one of the weirdest accidents ever.
Safety second 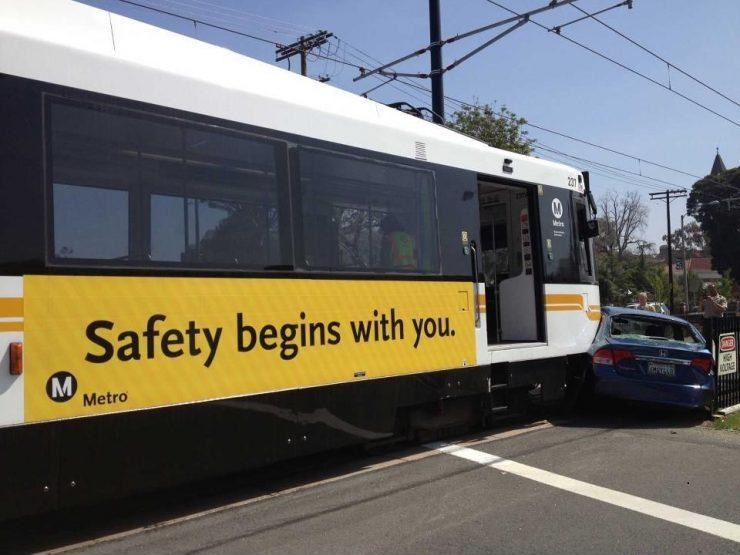 Safety begins with you, provided that you’re the guy who slows down and manages to read the message, and not the guy who tried speeding up and failed miserably. Getting hit by a tram is hard, and going viral as the poster boy for a safety campaign is probably much, much harder.
Don’t mess with trains 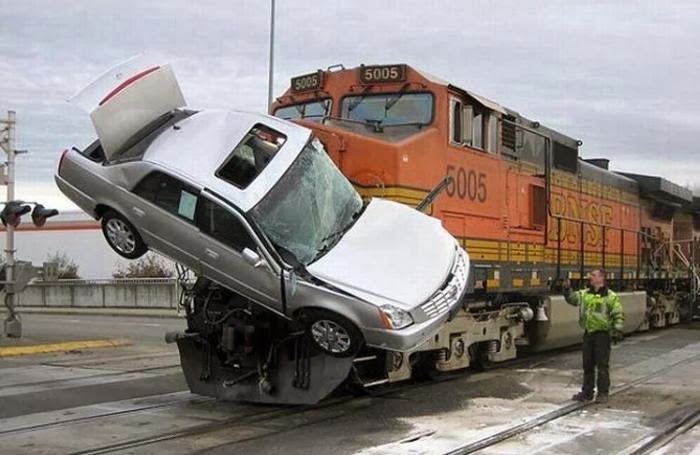 The moral behind this weird car accident is that no one, under any circumstances, should try to outrun a freight train. These gargantuan machines rarely cross paths with cars, but when they do, the best advice is to stand still and wait for it to pass. The frustration of watching a train slowly pass by for minutes is nothing compared to the risk involved if one tries to cross the rails right before the train approaches.
Hanging high 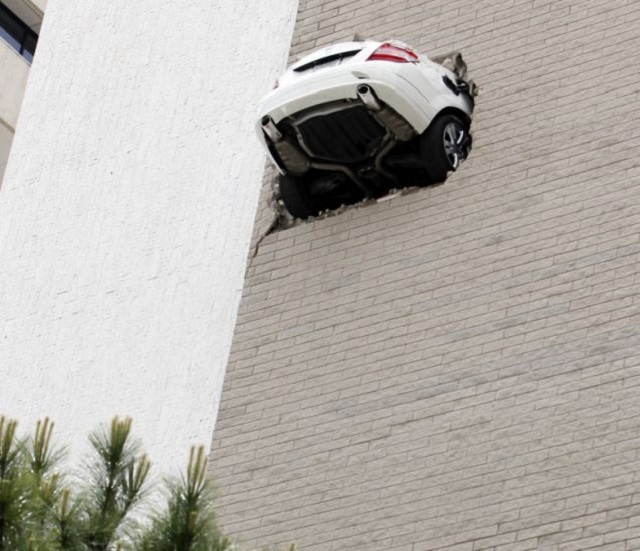 This unfortunate Mercedes-Benz C Class was a victim of its careless owner and feeble construction of the high-rising parking lot. The driver mistakenly went into reverse, crashing through the wall. Looking from a distance, the accident looks like a weird GTA stunt that went a bit wrong, and reality is sometimes not so far from the video games after all.
Soviet power still reigns 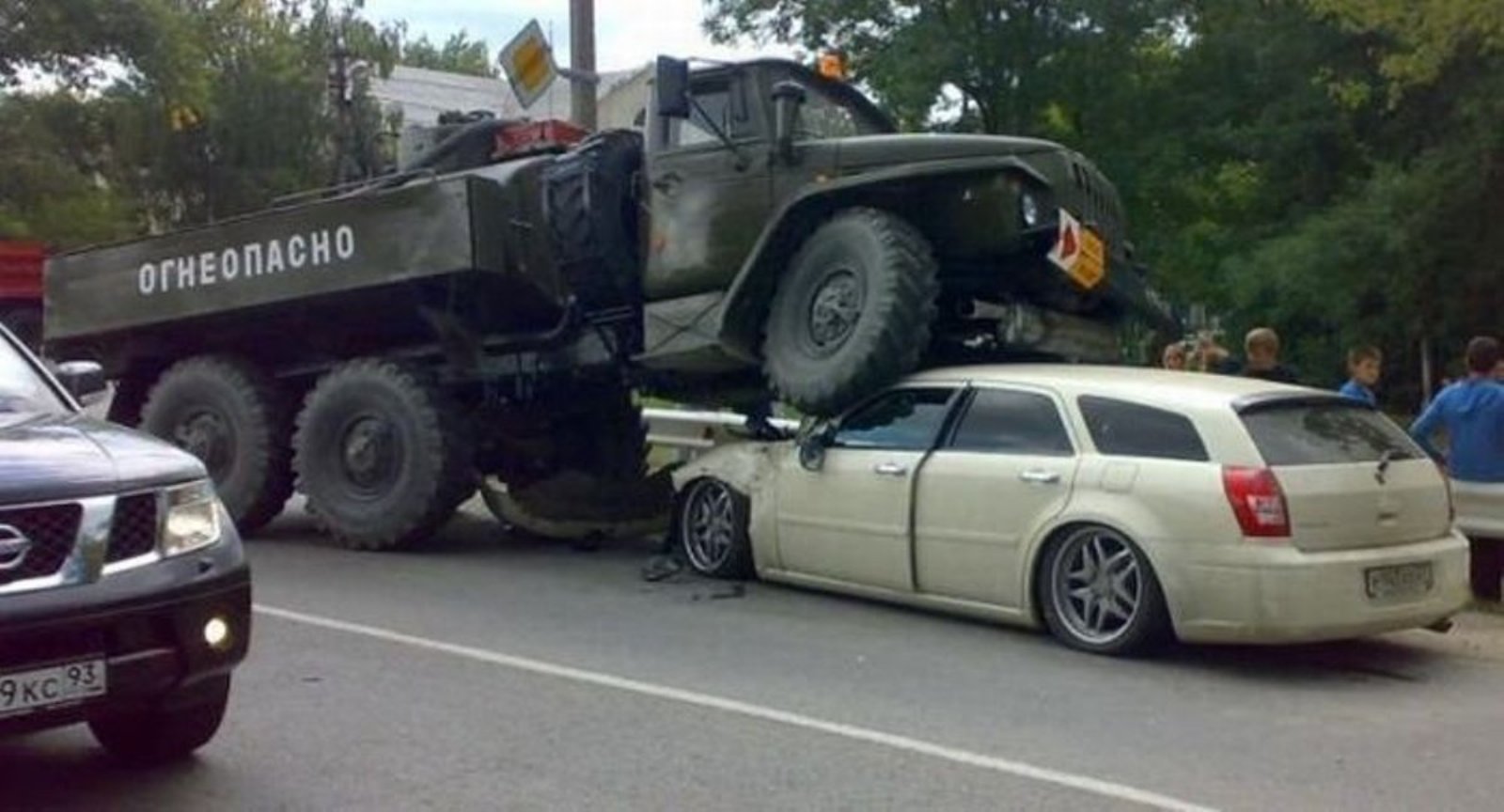 Somewhere in Russia, an old military truck was much stronger than this hapless American wagon which was caught under its massive wheels. What’s even stranger is that there was no damage to the truck at all, despite the fact that it has FLAMMABLE written on the side of its truck bed.
Pink Mayhem 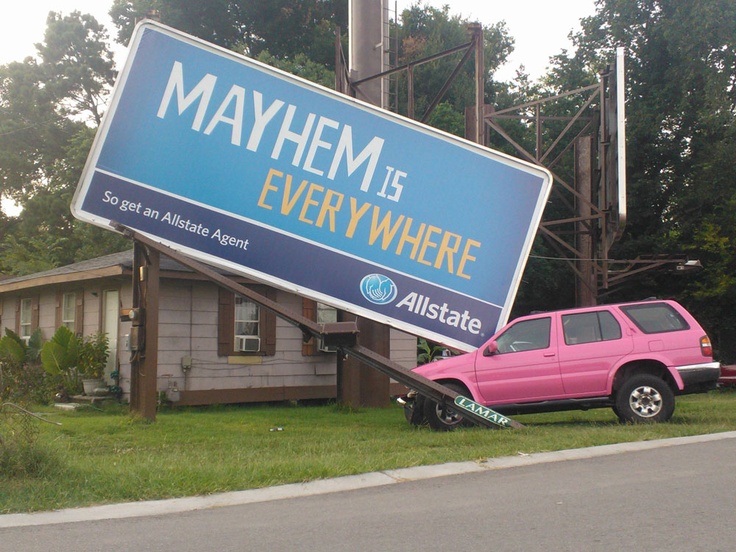 Allstate billboard quoting ‘Mayhem is Everywhere’ couldn’t have been truer when a pink SUV crashed right into it, proving that cheeky and frightful insurance commercials don’t necessarily lie.
That’s a way to go! 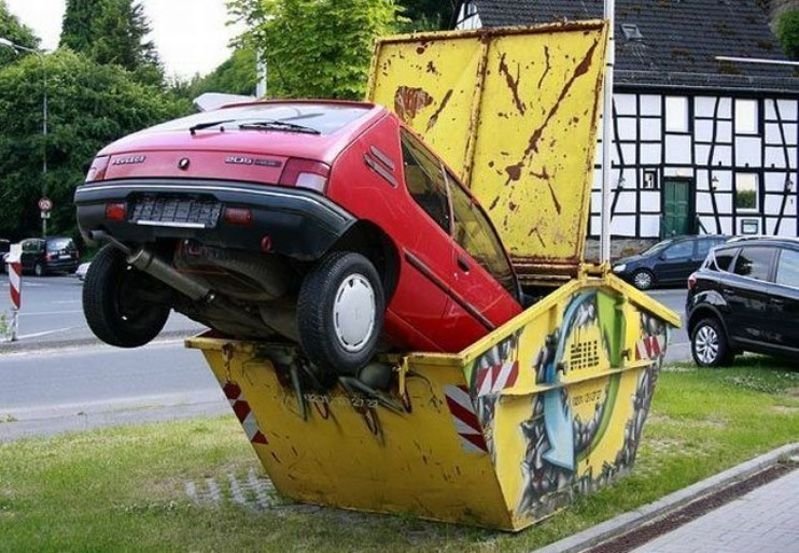 Sometimes when cars get totaled, drivers have to deal with unpleasant situations like waiting for a tow service to pick up the leftovers. Luckily for this unlucky Peugeot driver, he had his car crashed right in the recycling dumpster, sparing himself of many hassles. Just imagine recycling cars as efficiently as this guy did.
A sign from above 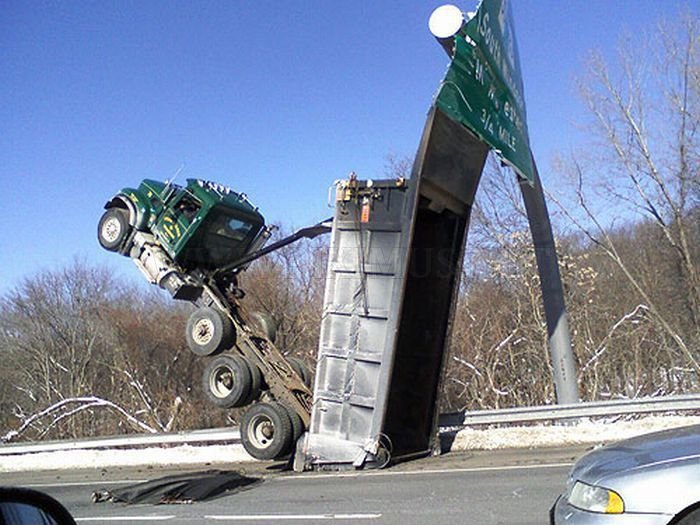 “You shall not pass!” screamed this brave highway sign as it stopped one truck from completing its journey. The reason for this strange accident was that the truck had a lifted bed which caught the lower part of the traffic sign.
The Le Mans flight 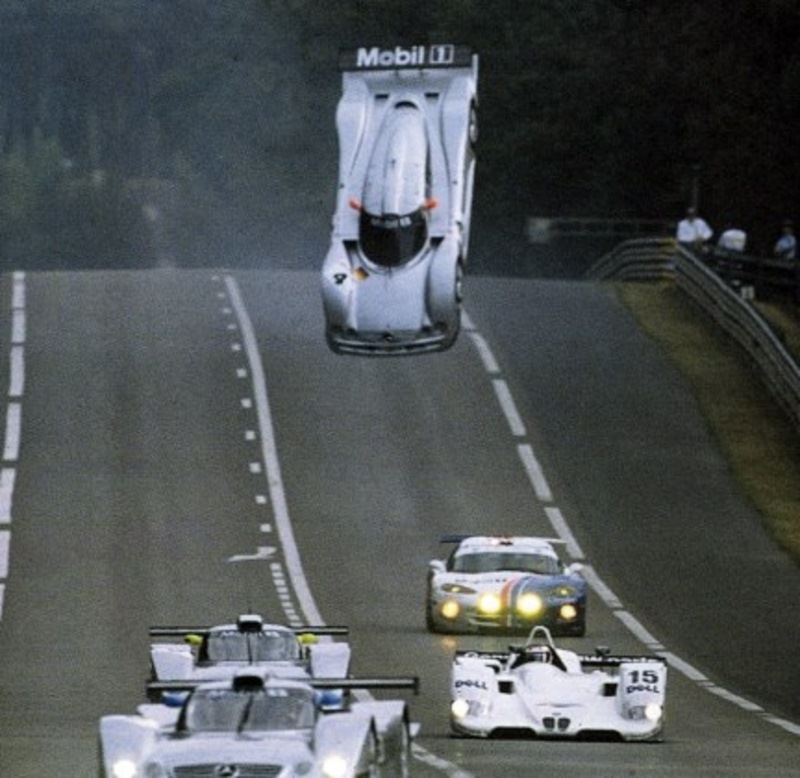 During the 1999 24 Hours of Le Mans race, a spectacular crash happened when the Mercedes-Benz CLR prototype piloted by Mark Webber literally took flight on the Mulsanne straight, backflipping out of the track. The whole world saw the Mobil 1 spoiler ad in the most spectacular fashion, and luckily nobody was seriously hurt.
Weinermobile crash 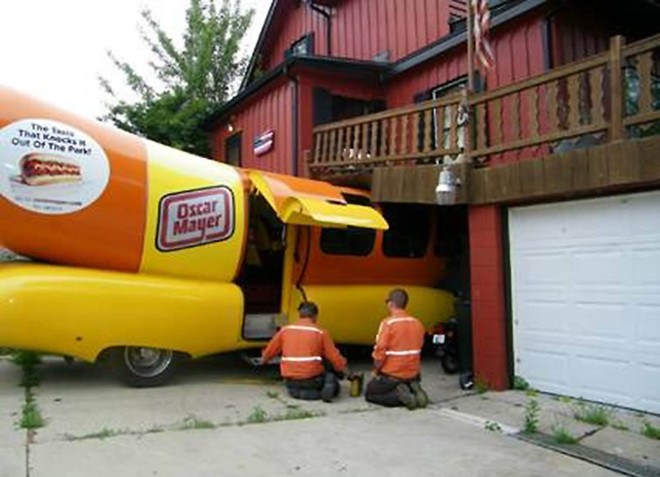 As if Oscar Mayer Wienermobile weren’t crazy enough all by itself, imagine hearing a loud crushing noise, only to discover that your house has been attacked by a car shaped like a giant hot dog. That’s exactly what happened in Wisconsin in 2014, when a young driver mistakenly went forward instead of reverse, causing the crash.  Cars losing control and crashing into houses are no rare occurrence, but this one sure is!
Leaving a mark 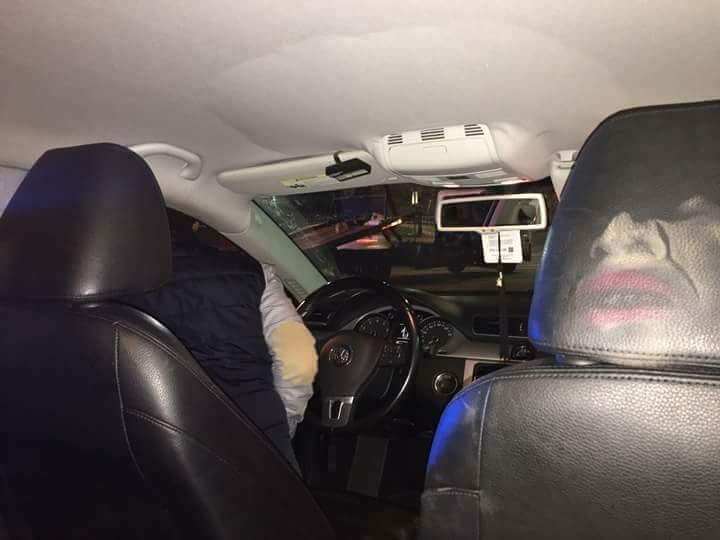 The hilarity of this accident comes from the inside, as one Twitter user shared a picture of the crash. One of passengers left the face of agony via the power of wearing too much makeup. The impact left a perfect artwork of powder and lipstick on the back of the headrest. The accident was minor, and nobody was hurt, except for the feelings of the unintentional artist after the photo went viral.
Bicycle power 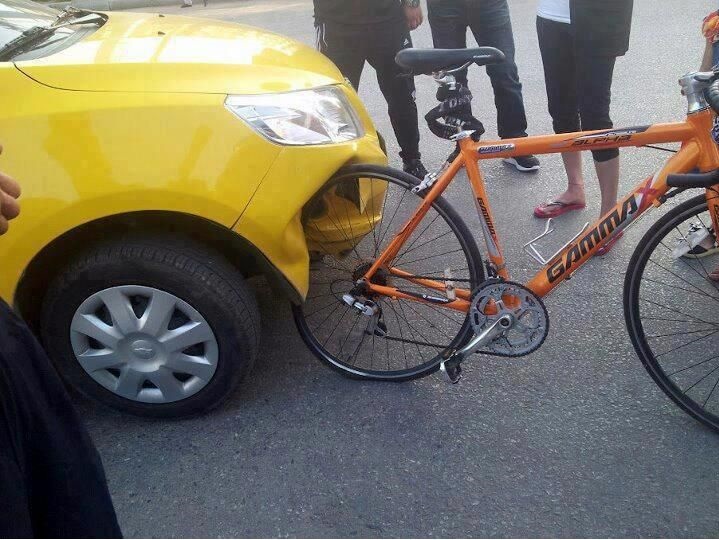 When cyclists and drivers collide, the outcome is usually in favour of the heavier, more advanced of the two, but not in this case, where a device as basic as a bicycle deformed the front fender of a car. The bicycle wheel suffered a flat tire and a bit of bending, and the car was on the loosing end.