20 Trucks That are Plummeting in Value

Buyers of pickup trucks are distinctly discerning at the moment, and with the high-quality trucks available on the market right now, there is no reason for this behaviour to change. As a result, though, the market has isolated itself from the second and third tier manufacturers that are emerging in other parts of the world. Car makers like Great Wall and Mahindra have not been able to establish themselves in the US, which is working to preserve the quality of the local entrants.

An unintended consequence of these factors however, is that the local manufacturers are still facing competitive pressure from the top tier Japanese companies, who can deliver product into the US at remarkable price advantages without being having their reputations linked to the lower quality entrants. This is resulting in a war of price vs value, where Toyota and Nissan are delivering high quality trucks at low prices, which is forcing local car makers like Chevrolet, Ford and RAM to react, or risk losing market share.

Two things are therefore happening at the same time. Prices are coming down, and trucks are getting bigger. Ford, RAM, GMC and Chevy have each delivered monstrous ‘full-size’ vehicles to counter the rash of mid-sized variants coming out of Japan. And Toyota and Nissan are ratcheting prices way down to counter the high cost of locally made trucks. These are interesting times in the segment, and the following is a demonstration of those two diverse actions. 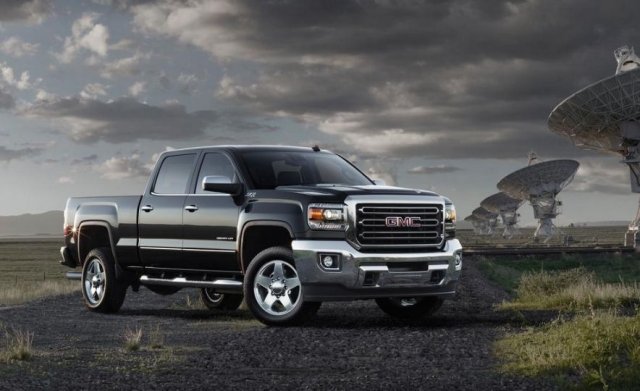 The Siera 3500HD is GMC’s play at the ultimate luxury pickup. Designed to excel as the dual-purpose machine that is currently most demanded (that is the truck needs to be powerful enough to handle work responsibilities during the week, and comfortable enough to carry the family on the weekend). With high quality interior finish and powered by GMC’s largest engine (6.6L Duramax Turbo Diesel powerplant), the Siera ranks highly on both counts. It is also the most expensive truck on the list. 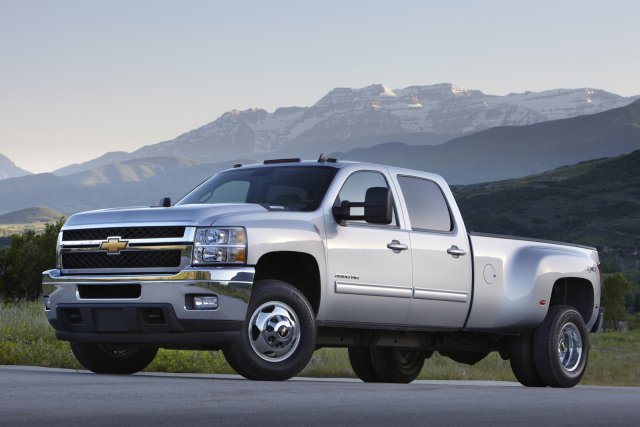 Designed to reflect the open spaces, wide roads and mountainous terrain it is intended to traverse, the Silverado 3500HD is Chevrolet’s highest quality offering. Developed side by side with the GMC Siera, the subtle changes Chevy have made rank the truck slightly higher than its stable-mate. Powered by the same 6.6L Duramax Turbo Diesel, pulling power and performance ratings are identical, however the finer work done on the suspension and steering make the Silverado more enjoyable to drive. 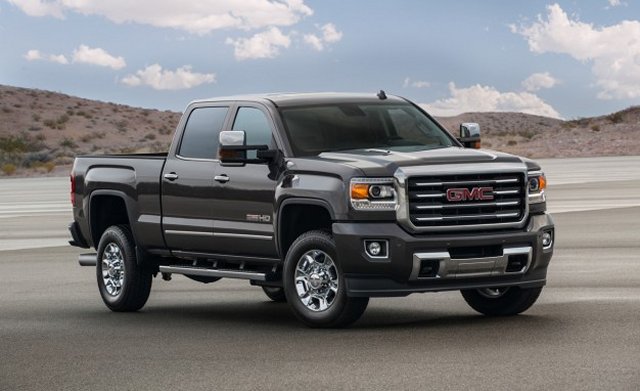 One step down from the massive 3500HD, GMC offer the 2500HD Siera. With the same 6.6L Duramax Diesel powering the unit, it is the softer suspension setup that reduces the payload by more than half. GMC continue to style the Siera has a luxury crossover when compared to the more workman-like Silverado, with the interior finished to car-like sophistication, resulting in the slight pricing differential to the matching Chevy. 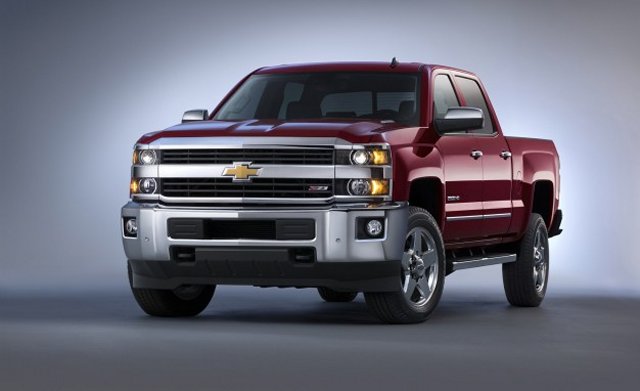 Benefiting from a $500 price advantage to the Siera, the Silverado 2500HD strips back the luxury interior elements, and allows Chevy to deliver a powerful, responsive dual-purpose work vehicle. While the interior sophistication does not match its GMC counterpart, the Silverado is nonetheless a comfortable truck to ride in, responsive to drive, and continues to be powered by one of the largest diesel motors available on the market today (the 6.6L V8 Duramax Turbo Diesel). With pulling power to spare, and only a softened suspension setup to reduce the payload, the Silverado overall slightly overshadows the pretensions of the Siera. 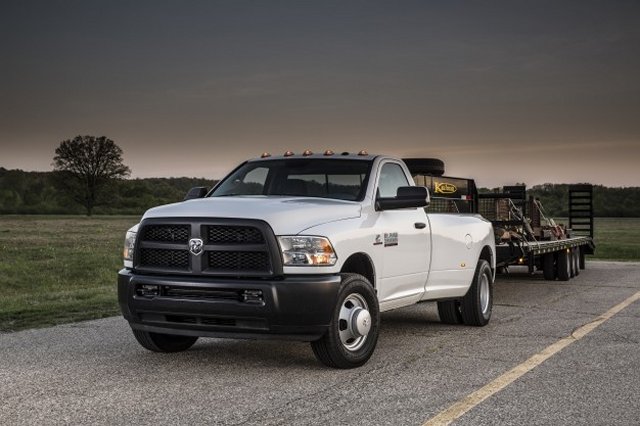 Rather than split the brands like GMC and Chevrolet, RAM choose to offer their big trucks in a range of variants, with gradually increasing levels of refinement. The price quoted here is the entry level Trademan. Powered by a 6.7L straight 6 Diesel motor, the RAM has a towing capacity of 31,210 pounds (smashing the 23,200 pounds offered by the Chevy 3500HD). With the ability to improve the interior specifications to match with the owner’s requirements RAM have offered a versatile and powerful pickup truck. The company continues, however, to combat perceptions around reliability. 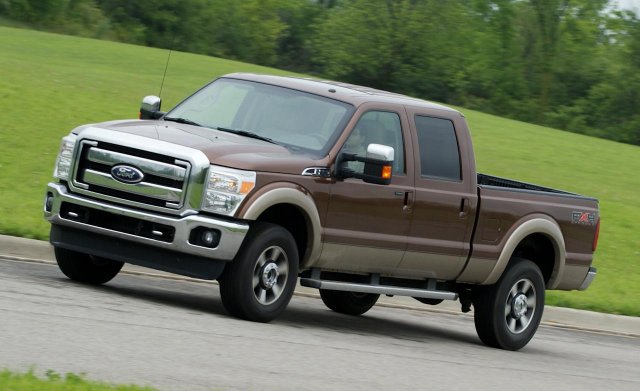 Mixing an aluminum body, with a steel frame and a giant 6.7L Diesel V8 engine, Ford appear to have delivered sports car handling into a genuine work truck. While you shouldn’t expect the truck to launch off from the lights, to zip around corners at high speed, in comparison to the cumbersome offerings from RAM, Chevy and GMC, the F-350 brings light steering and responsiveness to the fore. With all the pulling power you would need, the design of the new F-350 had centered around the driving experience. 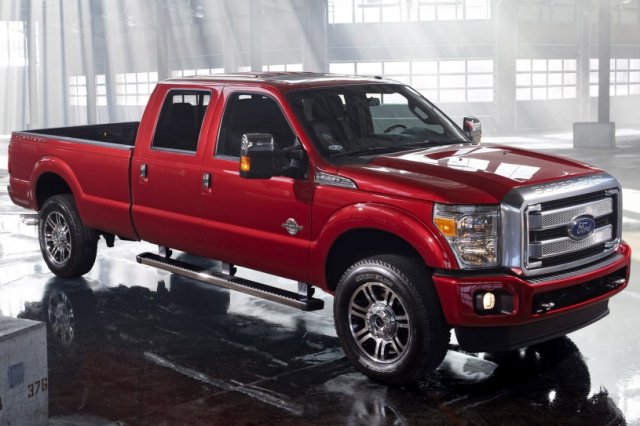 Expect commentary very similar to the F-350. With a slightly softer suspension setup reducing the payload capacity, the driving experience of the F-250 is a step up again on the larger variant. Ford are re-emerging from some challenging years, and are dedicated to delivering high quality vehicles to the market. Recognised for their desire to survey the competition the F range of trucks is a case in point for this strategy. They have seen what Chevrolet are doing, and have just decided to do it slightly better, and at a lower starting point. 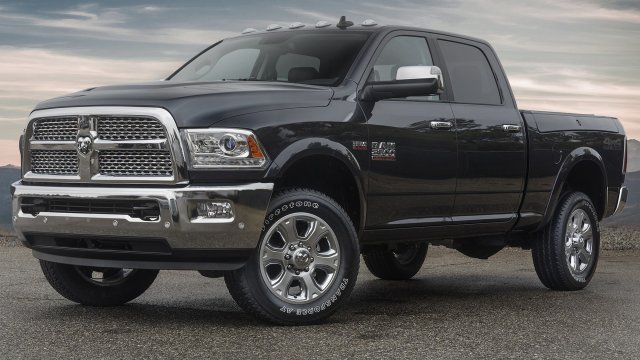 With the option to increase the interior specifications, and climb up to the 6.7L Diesel motor that powers the 3500 (although not at this price), the RAM 2500 has its eye on the F-250 as its direct competitor. When a buyer reaches the top of the range in the RAM they get class-leading towing capacity and payload, however they would need to pay for the privilege. And the 2500 has the same reliability reputation as the rest of the RAM range. For a $300 discount, we would expect the Ford to win more buyer’s hearts in this battle. 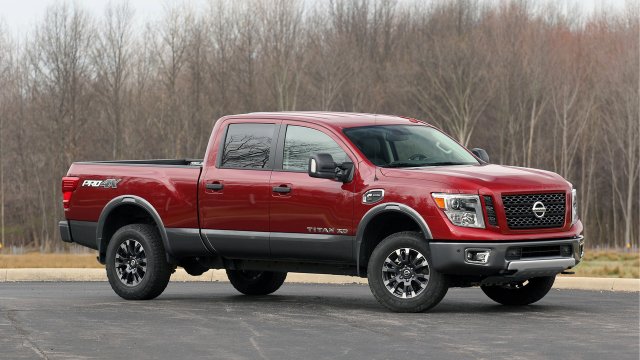 The Titan XD is the largest Nissan vehicle available anywhere in the world. Delivered with the standard 5.6L V8 Diesel motor out of Nissan and the truck is a capable work unit, with plenty of interior size, and sedanish handling that is typical of Nissan’s Pickup range. However, taking the option of the smaller, more powerful 5.0 L Cummins Diesel engine and suddenly the truck can tow 6 tonnes, and perceptions around it change dramatically. A powerful, invasive entrant from Nissan. 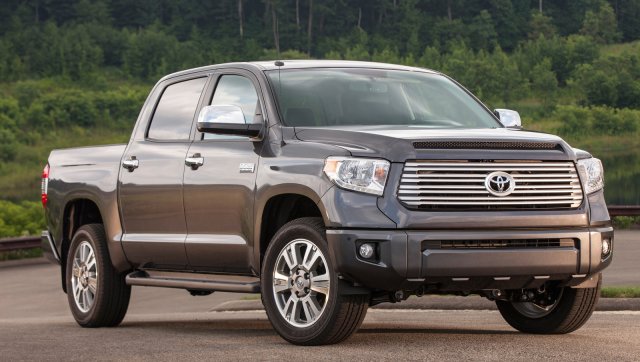 While certainly an attractive unit, and physically imposing on the road, the Tundra can’t quite seem to deliver the same power and capacity of the larger US-made trucks. Toyota do, however, have a reputation for reliability and comfort, and the Tundra maintains that standard. Easy to drive, and sure to go the distance, the Tundra’s weak payload capacity (2,060 pounds compared to the Siera 2500HD’s 3,300) reduces the impact it will have on the market. 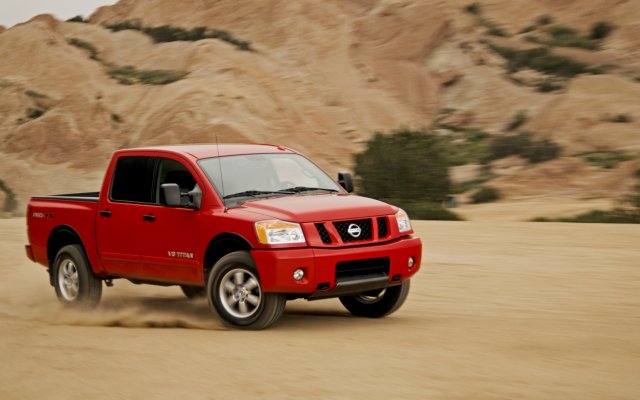 As the countdown moves into the mid-sized trucks, the Japanese manufacturers begin to make their move. The Nissan Titan and Titan XD are genuine competitors in this space, with the companies typically impressive fuel economy married with exceptional handling (which plays against the strengths of the Fords). The new model has grown into some aggressive styling, and carries a big stick in the 5.7L Gas V8 engine offering low end grunt to spare. 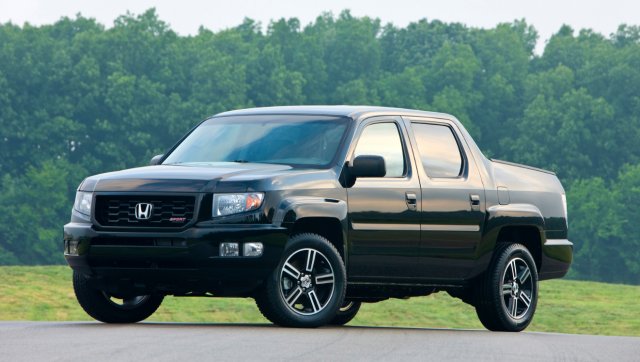 The Ridgeline is Honda’s only entrant into this list, and displays the Japanese small-car specialist’s technical capabilities brilliantly. With interior features and sophistication that leaves all its competitors in the dust, the compact truck’s main weakness is the exterior styling. The long sweeping lines that exemplify Honda’s sports cars leave the Ridgeline looking a little effeminate when standing next to the squared-up brutes that come off the Detroit assembly-lines. Some work to be done by Honda, who can learn from where Nissan have taken the Titan. 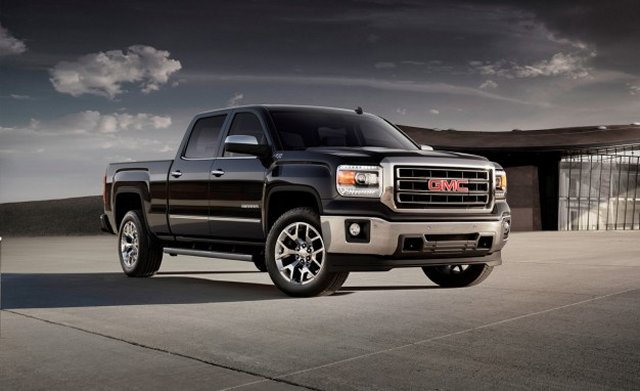 The Siera 1500 continues to present itself as the luxurious equivalent to the Chevy. With typically American styling on the outside, GMC have backed away from the Diesel power-plant in this model. This has the effect of reducing the overall power and capacity of the ute, without sacrificing space or road-handling. 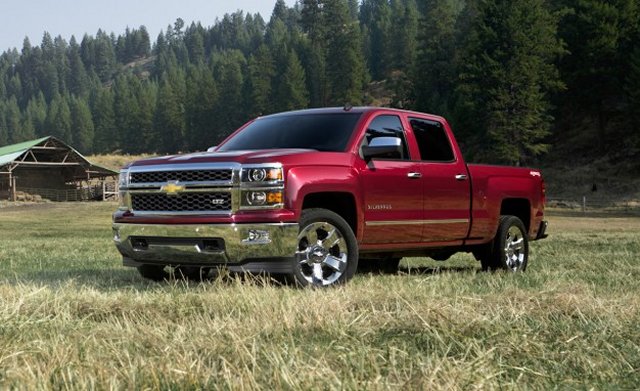 By picking the bling off the interior of the Siera, the Silverado offers identical performance, adequate comfort, and a $600 discount for what is otherwise the same truck. Standard with the 4.3L Gas powered V6 engine, buyers have the option to ratchet that up to the 6.2L V8 if they just can’t go without the visceral rumble of a big motor. Otherwise the Silverado is a comfortable and capable truck. 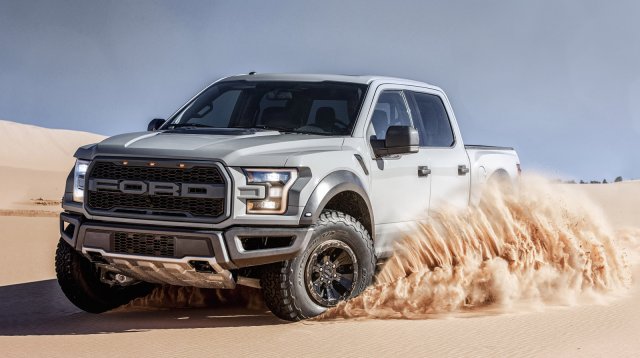 The F-150 is an exceptionally well rated machine, with the move to Aluminum and Steel construction delivered class-leading driving excellence and power to burn without draining the tank. Fuel efficiency is not necessarily a characteristic of a US-made pickup truck, but the lighter construction of the F Series trucks has been able to deliver it without giving up on power. 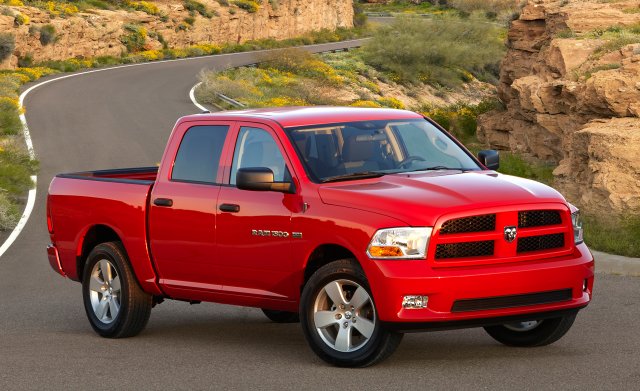 Delivering the most versatility of the RAM range, the cross-grill and Ram’s head emblazoned on the front of the 1500 are distinctly recognisable. The truck delivers plenty of torque from the standard 3.6L V6, and comes with the option to scale that up to the low grind of a 5.7L V8. Reliability issues aside, the RAM 1500 is capable, nimble (for a truck) and enjoyable to drive. 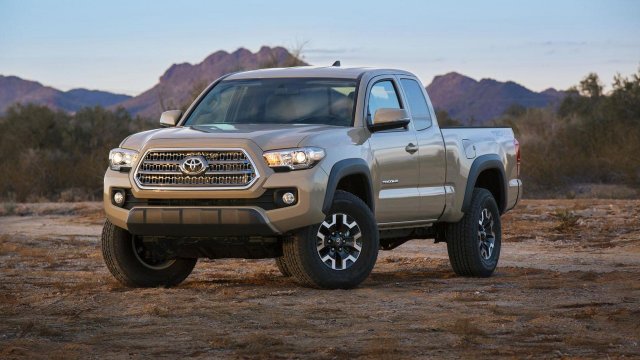 Developed off the back of Toyota’s dominant Hilux platform, the Tacoma is considered a leader in reliability and consistency. Powerful, versatile, and uniquely equipped off-road, the Tacoma has a tidy, muscular appearance that will appeal in the US, without blending into the crowd. While the interior can feel a little cramped at times (particularly in the second row where leg space is at a premium), the overall driving experience and capabilities of the Tacoma will offset those minor inconveniences. 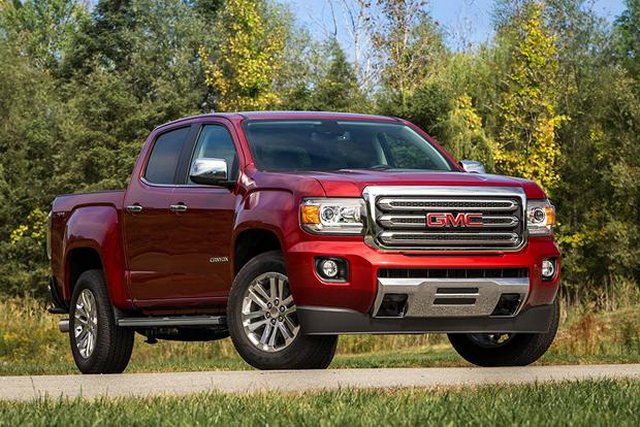 The ‘upscale’ stable mate of the Chevy Colorado, the Canyon is a squared up and capable mid-sized truck that doesn’t quit, in this instance, meet the definition of ‘upscale’. The standard 2.5L 4 cylinder lacks pulling power, but delivers economy and a quiet ride. Optioning up to the 2.8L Duramax Turbo Diesel scales up the torque considerably, however, and turns the Canyon into quite a capable machine. The top range Denali trim provides for maximum interior comfort. 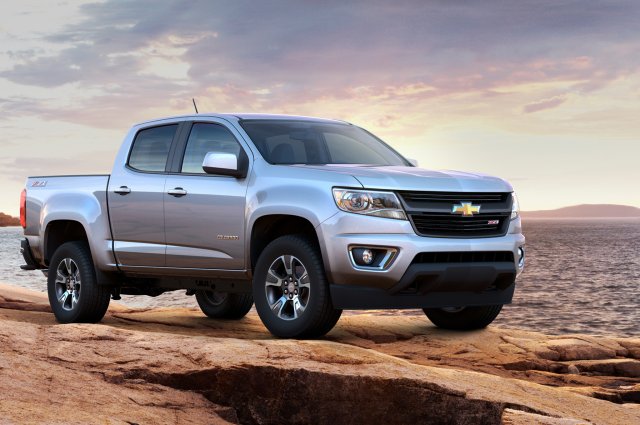 While exterior styling is a largely subjective measure, the Colorado’s sharper front end does tend to give it a more aggressive look than the Canyon. Available with the same engine options as the Canyon, the Colorado’s top accessory pack is the ZR2, which results in a truck with a unique off-road style that will lend itself to mountain bikers and snow-boarders alike. At a reasonable entry price, and a sporty appearance, the Colorado is looking for a very specific (and ubiquitous) buyer. 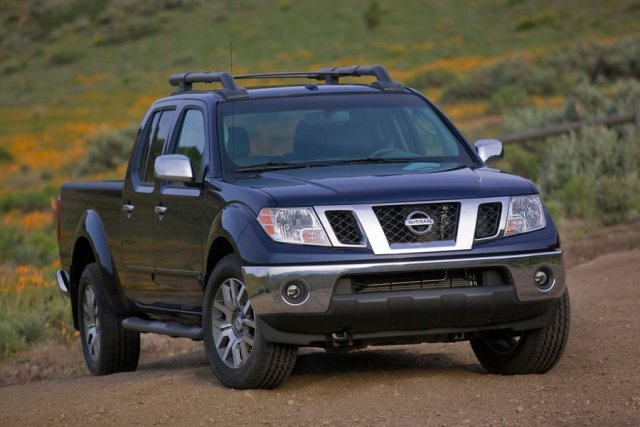 There is no doubt the Frontier is out of date, but it remains an active player in the mid-sized truck space because it is capable, priced well, and has a reputation for durability. Standard with a low torque 4-cylinder engine (but the ability to option up to the 4L V6), towing capacity is not the primary function of the Frontier. However, the truck is definitely capable off road, and can be accessorised with the Baja-inspired Desert Runner setup which delivers a slightly more appealing look. Nissan have improved the appearance of the Titan, but need to deliver a more muscular look to the Frontier.