28 Most Expensive Cars Owned by Celebrities

Some of our favorite celebrities are known to love their cars. Some collect antiques, while others prefer to drive the newest, fastest machines on the market. Some celebrities’ car collections are a combination of both old and new. One thing all their wheels have in common is a steep price tag. Below is a list of the most expensive cars owned by celebrities in 2016. 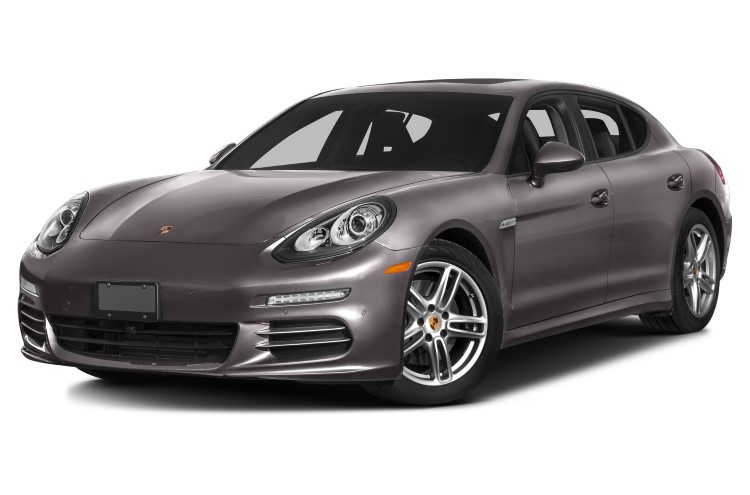 The Porsche Panamera received a 5/5 rating from Car and Driver. Owned by celebrities like rapper Dr. Dre, the second generation Panamera was revealed in spring of 2016 and is backed by a 440 hp twin-turbo V6 engine. It has an 8-speed dual-clutch automatic transmission and all-wheel drive. It’s a beautiful wheel to get behind, especially at less than $100,000.

The 360 Spider is Ferrari’s twentieth road-going convertible. Singer Seal owns one. It comes equipped with a 400 hp 3.6 L V8 engine. The 360 Spider has a curvilinear waistline design and is lightweight for its class, coming it at just about 130lbs more than the coupe. 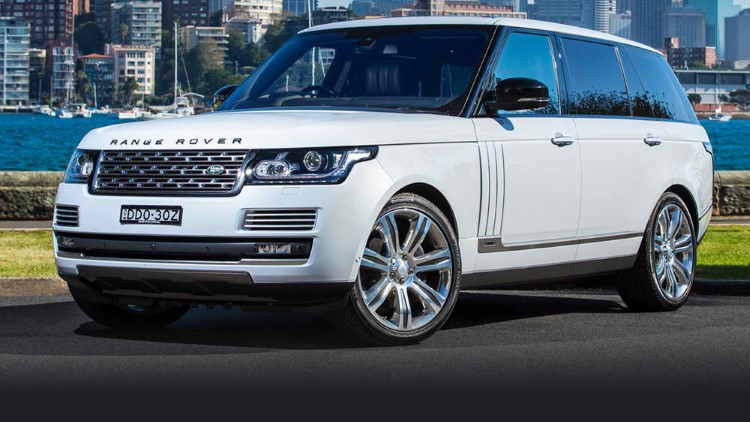 The Range Rover may not be the flashiest vehicle on this list, but it is one of the most popular with celebs. Whereas sports cars are produced in limited numbers, the Range Rover is not. It is still, however, a status symbol with a hefty price tag and a 5-star rating from Car and Driver. It’s highly configurable, with gas and diesel engines available, and even comes in a Sports edition that’s surprisingly agile with a quiet, efficient 254-hp 3.0-liter turbodiesel V-6 engine. Justin Bieber can be seen driving a Range Rover, as can Paris Hilton, Daniel Craig, Jessica Simpson, Michael Phelps and Olivia Wilde. Although it’s not a super-fast race car, it’s popular, practical and pricey package make it appealing to anybody with a sizeable bank account. 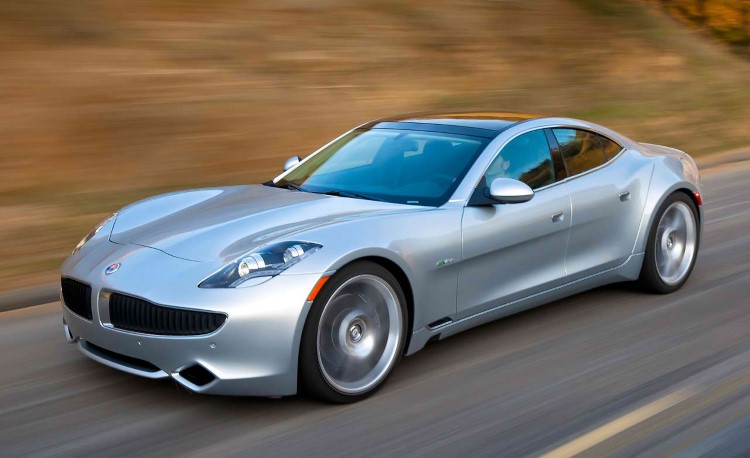 The Fisker Karma is the world’s first range-extended electric luxury sports car. It’s the only electric or hybrid car to make this list and with more and more celebrities being concerned for the environment, it’s an easy sell to the rich and famous. It has a 2.0 L turbocharged Ecotec VVT DI LNFI4 engine with two 201 brake horsepower motors, capable of producing 960 lb-ft of torque. It has a 125 mph top speed and both Ice-T and Dr. Dre have owned one of these electric sports sedans. 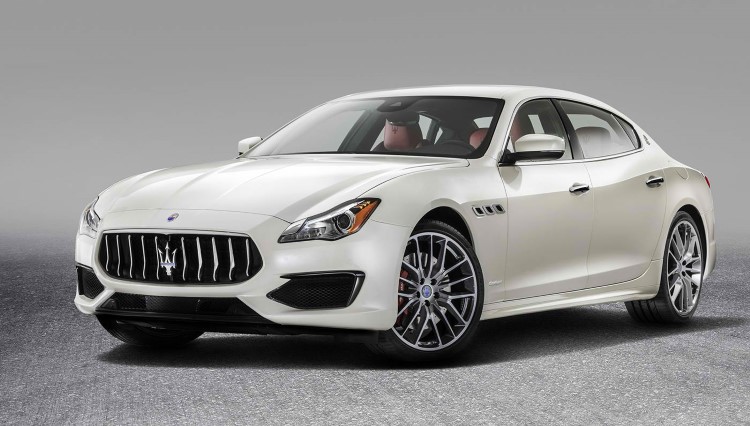 Gwen Stefani drives a Maserati Quattroporte and it’s not hard to figure out why. The 2017 model can get up to 523 hp with its 3.0 L V6 or 3.8 L V8 engine. The name of this car translates to mean “four doors.” There have been six generations of this car and the 2017 release is highly anticipated. 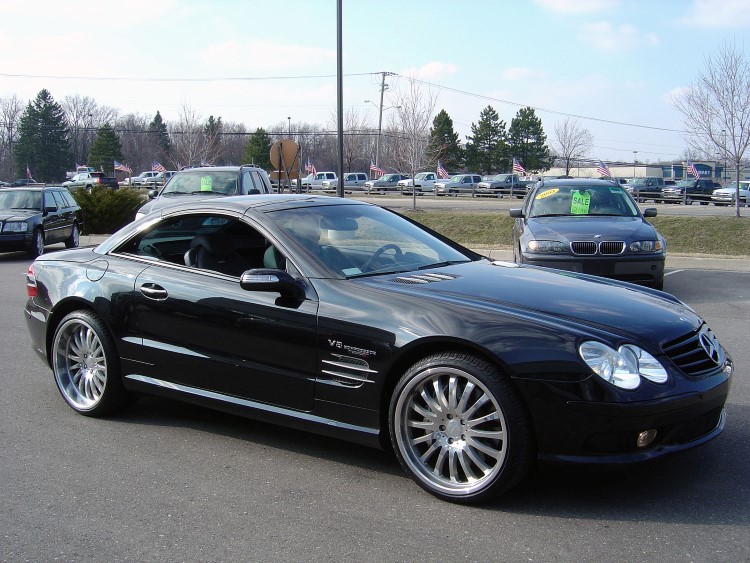 Rapper turned TV cop, Ice-T has a reputation for the love of a finely crafted and expensive car. The Mercedes-Benz SL 55 R is one in his collection. It has a twin-turbocharged 6.0 L engine and can reach up to 604 hp. 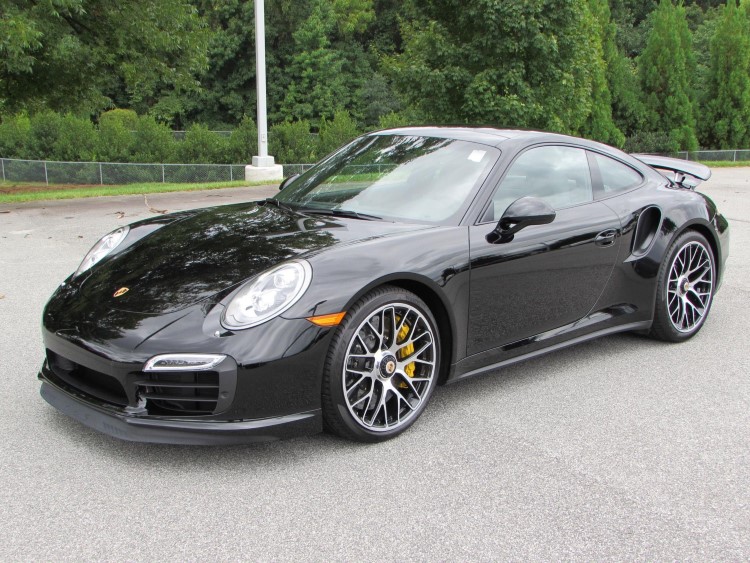 With a price of $159,200, the Porsche 911 is not the most expensive car on this list. Car and Driver have given it a 9/10 rating. It boasts 540 hp and a 3.8 L 6-cylinder engine, managing 486 lb-ft torque. Floyd Mayweather owns one and the luxurious interior, exceptional handling and formidable acceleration (60 mph in less than three seconds) makes it an appealing sports car, available in coupe or convertible configurations. 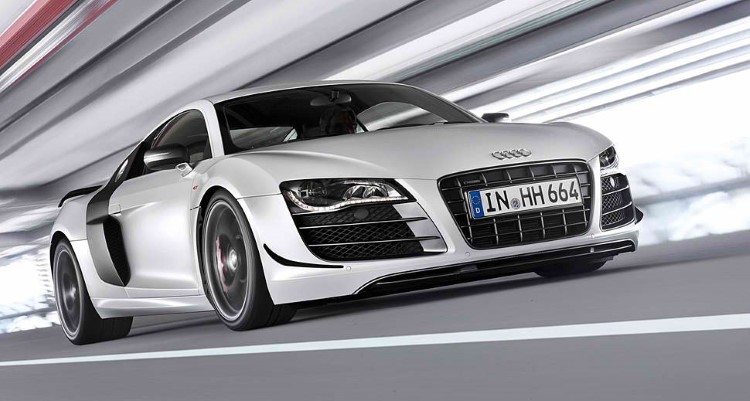 Motor Trend gave the Audi R8 GT a 5/5 rating. Loaded with 560 hp and a 5.2 L V10 engine, it’s a sharp, attractive, 2-seater sports car that the likes of Lady Gaga drives. This car is designed, developed, and manufactured by Audi AG’s subsidiary company, Quattro GmbH, and is based on the Lamborghini Gallardo platform. Not too many Audis handle like Lamborghinis, making this one ultra-sporty and appealing for any celebrity. 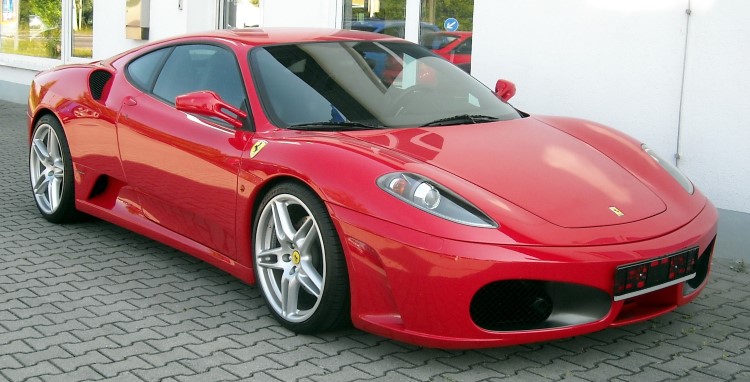 The Ferrari F430 is a sports car made by Ferrari from 2004 to 2009. Kim Kardashian, reality TV show icon with her own emojis now, has been seen behind the wheel of this 6-speed manual transmission vehicle. The Ferrari F430 has a rear 4.3 L Ferrari F136 E V8 engine and can accelerate from 0-62 mph in 3.6 seconds, with a top speed of 198 miles per hour. With a sleek, ultra-aerodynamic body reminiscent of a race car, it’s easy to see any celebrity’s attraction to this car. 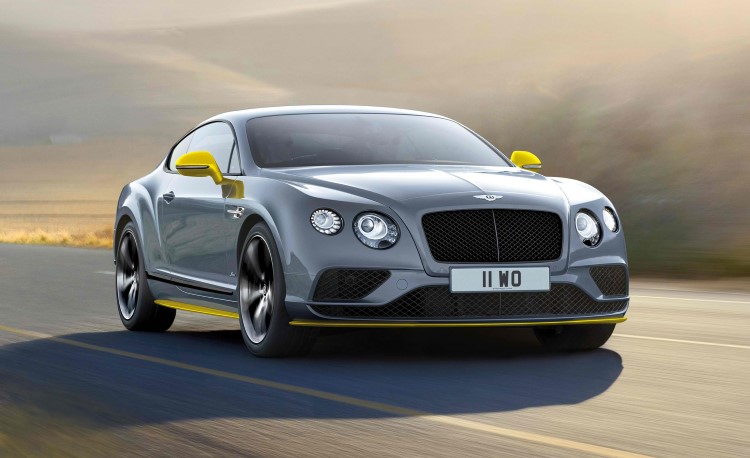 The Bentley Continental GT is a grand tourer that has been available since 2003. The GT V8 version has a twin-turbo 4L engine capable of producing 500hp and 487 lb-ft of torque. This car can reach speeds up to 192 mph. Paris Hilton is the celebrity to mention if on the topic of the Bentley Continental GT, as she had a customized diamond-encrusted dashboard installed in hers. 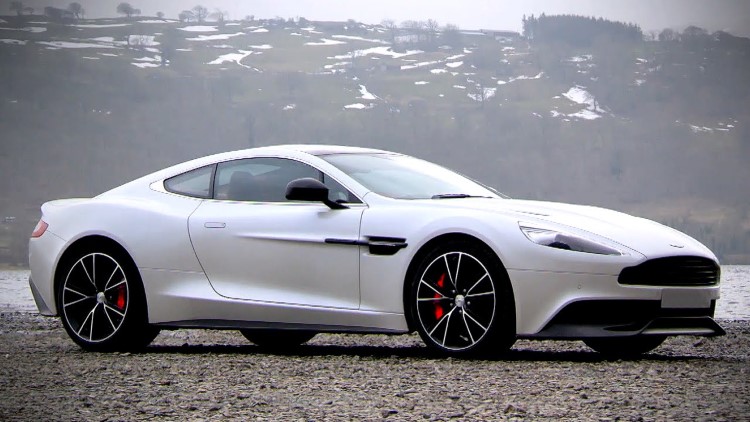 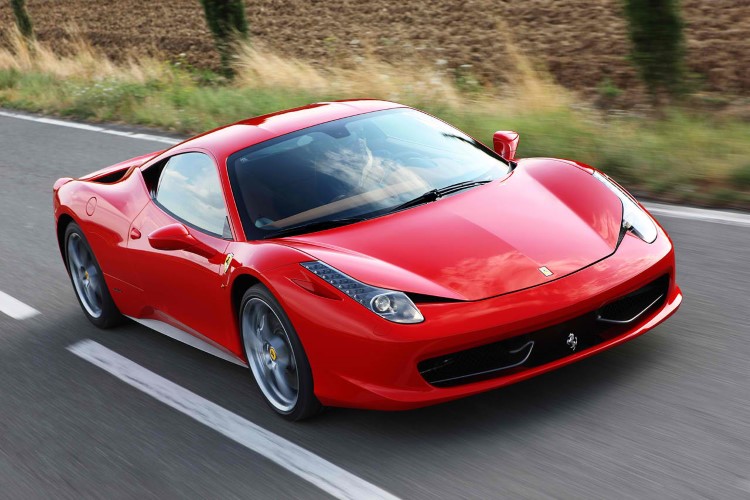 Boxer Manny Pacquiao owns a Ferrari 458 Italia. The price tag on this sports car is indicative of his success in his sport. The 458 replaced the Ferrari F430 and was first revealed at the 2009 Frankfurt Motor Show. It comes with a 4.5 L Ferrari F136 F V8 engine. Its official speed measurement is 0–62 mph in 2.9–3.0 seconds. Its top speed, like others on this list, is around 210 mph. 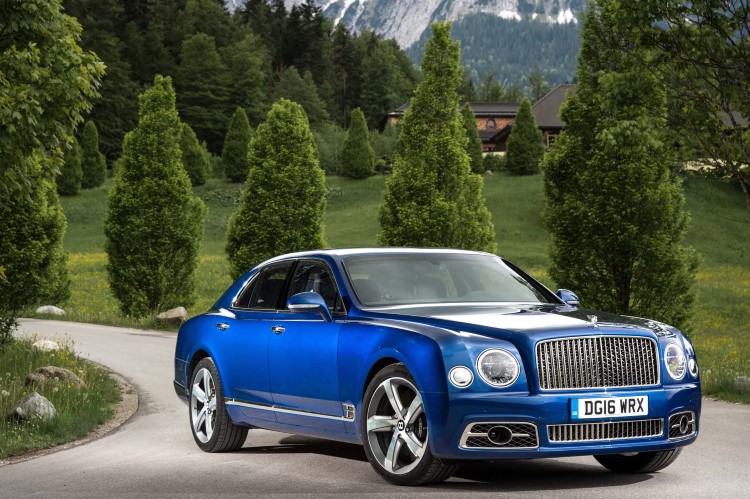 The Bentley Mulsanne is another luxury car in Lil Wayne’s collection. It’s named after the Mulsanne Corner of the Le Mans racing circuit, commemorating the six wins Bentley cars have had at the race. It’s a car the exudes comfort. It has comfort headrests with manually adjustable wings for lateral support, footrests that camouflage into the interior carpet, seat ventilation and massage functionality. It also has power, with a twin-turbo 6.75-liter L Series V8 engine and 8-speed ZF 8HP automatic transmission. 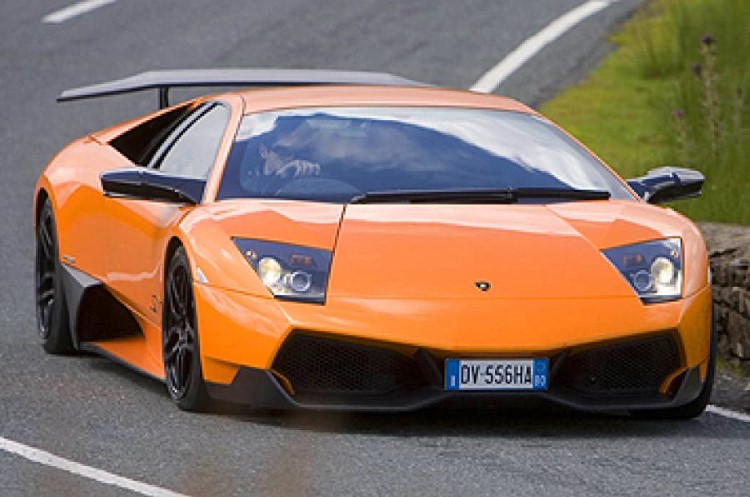 The Lamborghini Murciélago (Spanish for bat) comes ready to drive, and fast, with a V12 6.5 L engine. It’s the successor to the Diablo and was first introduced as a coupe in 2001. Rapper 50 Cent owns a Lamborghini Murciélago and with its scissor doors and an engine output rated at 641 hp it’s an enviable purchase. This Lamborghini can reach 62 mph in 3.4 seconds and achieve a top speed of 210 mph. 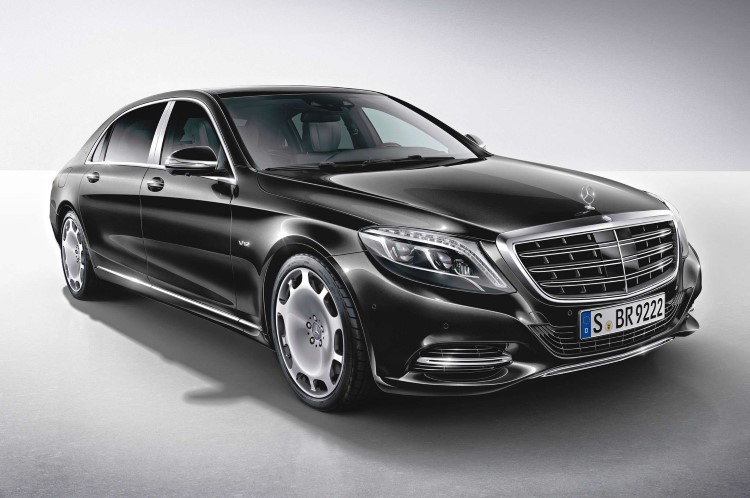 Mercedes resurrected the Maybach in 2015 as a sub-brand of the Mercedes lineup, an offer of superior luxury. The first model produced was the Mercedes-Maybach S-Class, modeled against competitors like the Bentley Mulsanne and Rolls-Royce Phantom. One celebrity’s son got this $360,000 car for his 16th birthday: Justin Combs, P Diddy’s first born. 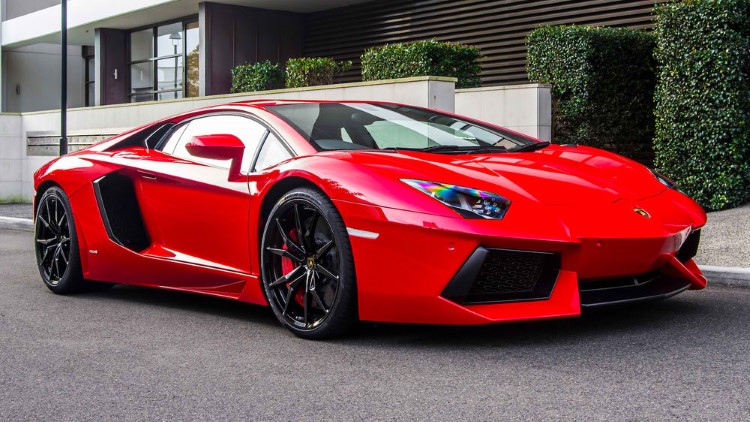 The Lamborghini Aventador sports a 6.5 L V12 engine and up to 740 hp. It looks like a Lamborghini, all curves and aerodynamics, and is made of a new carbon fiber material called “Carbonskin.” It was designed to replace the Murciélago as the new flagship model. Kanye West owns one; it was gifted to him by his then-girlfriend, Kim Kardashian. 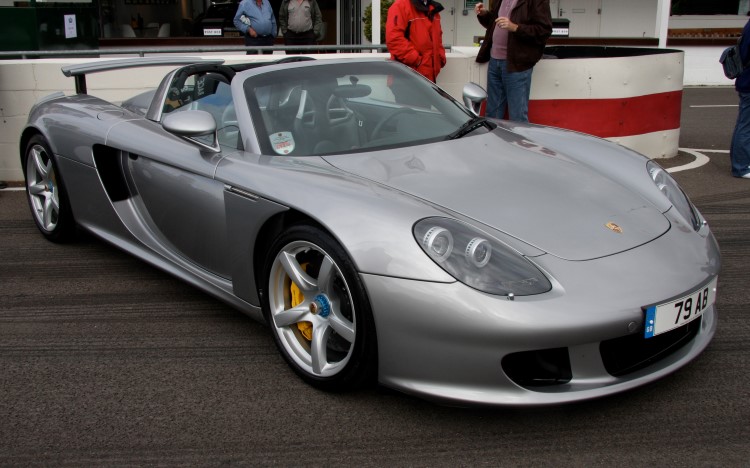 The Porsche Carrera GT was manufactured with a 5.7 L V10 engine and 605 hp capability. It’s a mid-engine sports car produced by Porsche from 2004-2007. It’s notable due to the fact that Sports Car International named it number 1 on its list of Top Sports Cars of the 2000s, and number eight as a Top Sports Car of All Time. Jerry Seinfeld owns one of these Porsches and considers it one of the best in his collection. 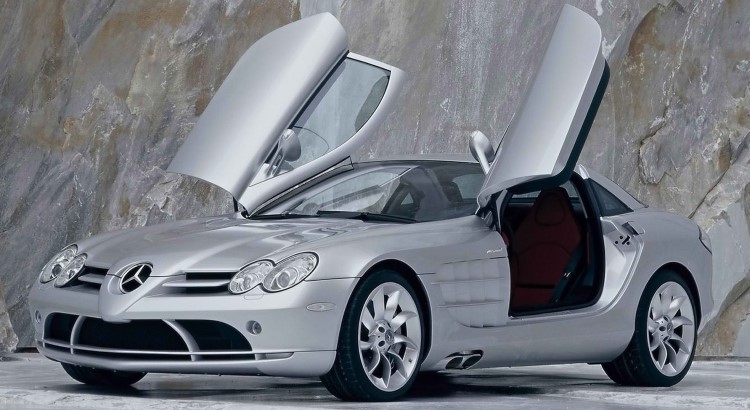 The Mercedes SLR McLaren is a 2-door grand tourer with butterfly doors and a supercharged, aluminum, SOHC, V8 engine. Jay Leno is famous for owning this car, though it’s not his only one. The SLR 722 can accelerate from 0 to 62 mph in 3.6 seconds, 120 mph in 10.2 seconds and 190 mph in 27.6 seconds. It can reach a top speed of 209 mph, making any celebrity behind the wheel of one pretty hard to catch. 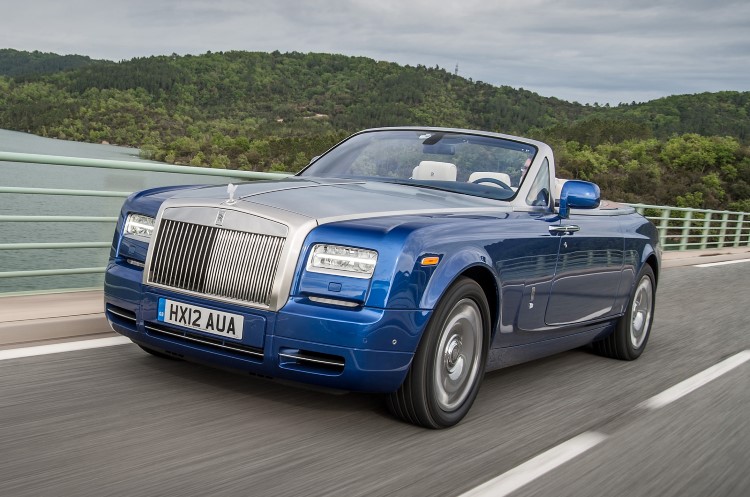 The Rolls-Royce Phantom Drophead Coupe is a British luxury car. It comes equipped with a V12 6,749 cc engine, 6-speed automatic and is a 2-door convertible. The design of this car was inspired by the 2003 Rolls-Royce Phantom and the 100EX, a concept car. David Beckham, sports star, is well known for owning a personalized version of this car. His includes his soccer jersey number embroidered into the seats. 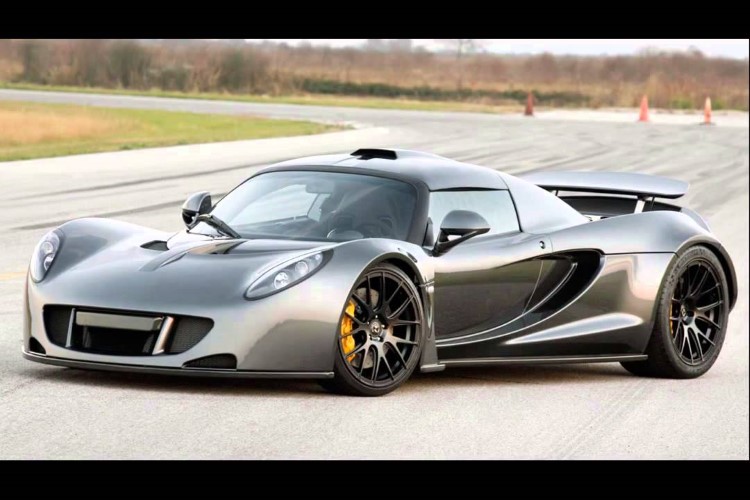 The Venom F5 is another proud-to-be-an-American car on this list. Hennessey plans to give this newest model a planned power output of 1500 hp and a top speed of over 290 mph. This Texas-built hypercar is sure to be a favorite or any speed-thirsty celebrity. Production is limited and the price is undisclosed, making the Venom F5 one of the fastest and also hardest to get hypercars on the market. 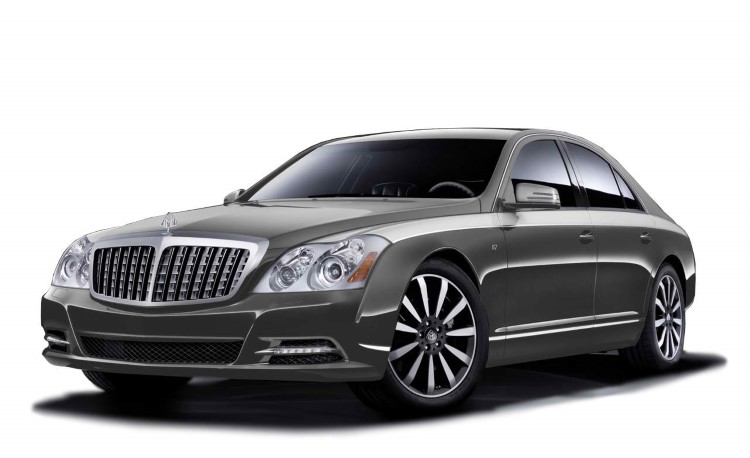 Samuel L. Jackson loves his Maybach 57. The engine in the base Model is the Mercedes-Benz M285, a twin turbo 5.5-litre V12 developed for only new Maybach models. It has been voted first place in Luxury brand status, ahead of competitors like Rolls-Royce and Bentley and with a voice recognition navigation system, air conditioning with four-zone climate controls, a power rear sunshade, and infotainment system it’s not difficult to see why. 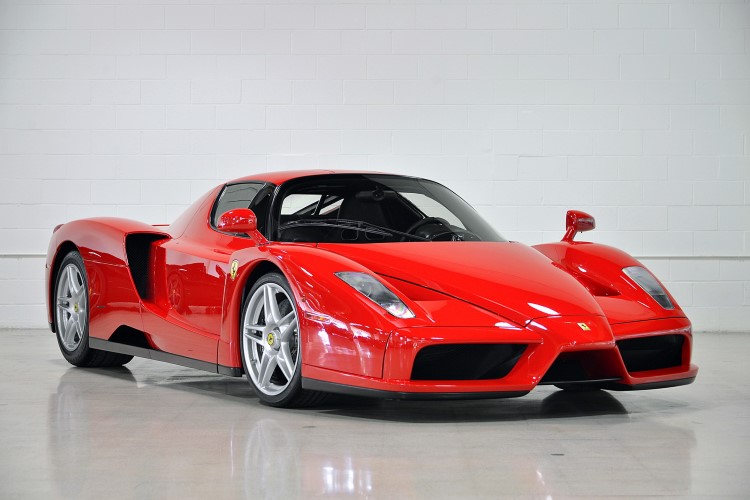 This Ferrari Enzo comes standard with a 6.0 L V12 engine and the potential for 660 hp. It has poor fuel economy but any celebrity that can afford it (at more than $670,000) is probably not concerned about the cost of gas. This car can go from 0-60 mph in 3.4 seconds. Nicholas Cage owns one of only 399 ever produced. 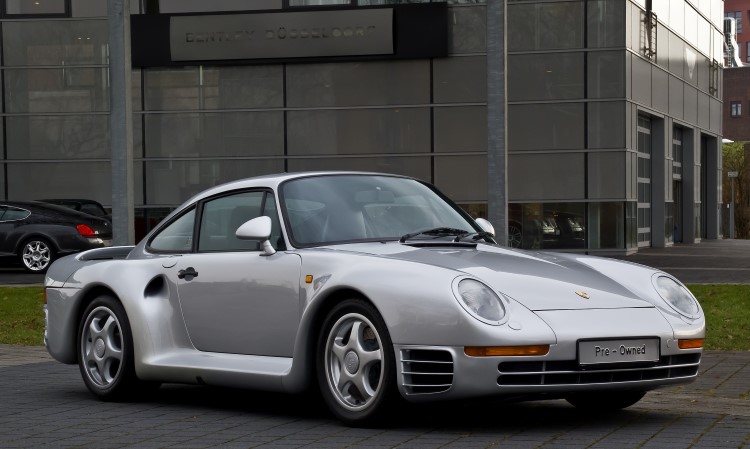 The Porsche 959 is a rear-engine, four wheel drive sports car released by Porsche from 1986 to 1993. Jerry Seinfeld owns one of these speed demons, having himself one of the biggest Porsche collections in the world. Only 337 Porsche 959s have ever been produced and when it was initially introduced, the 959 was the world’s fastest [street-legal] production car with a top speed of 195 mph. 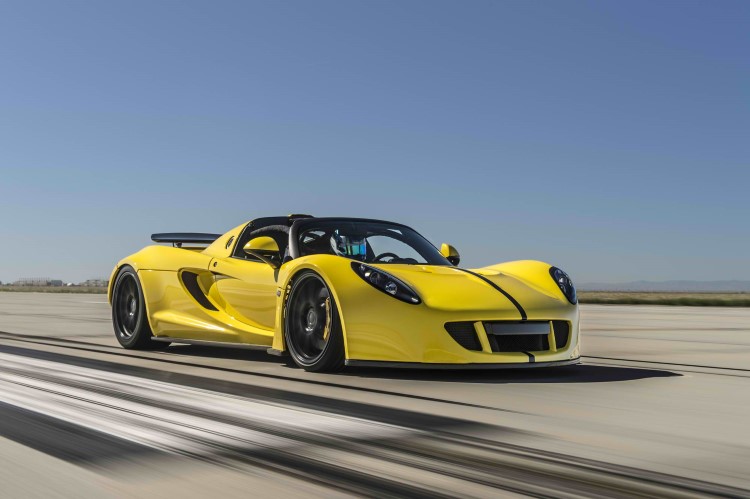 The Hennessey Venom GT is one of few American cars on this list. It’s a sports car based on a heavily modified Lotus Exige chassis design. Rock musician Steven Tyler is famous for requesting a convertible Hennessey Venom GT and having one made for him. The Spyder is an open-top version of the Venom GT. It still has the 7.0 L-Twin Turbocharged V8 engine and Ricardo 6-speed manual, however. 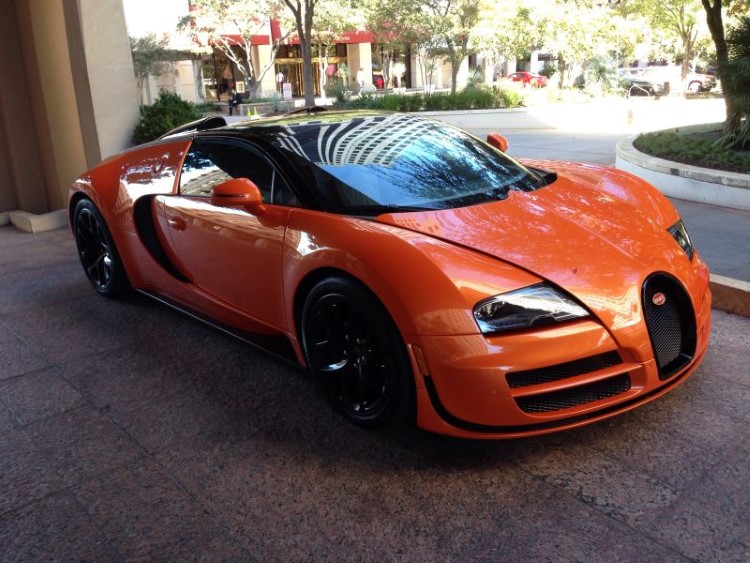 The Bugatti Veyron with 1200 hp and an 8.0 L V16 is a mid-engine sports car capable of reaching a maximum speed of 253mph. It’s owned by many celebrities (Tom Cruise, Tom Brady, Simon Cowell, and Chris Brown). Today the Super Sport version is recognized by the Guinness World Records as the fastest street-legal production car in the world. Pretty easy to see why so many celebrities would want to own one, isn’t it? 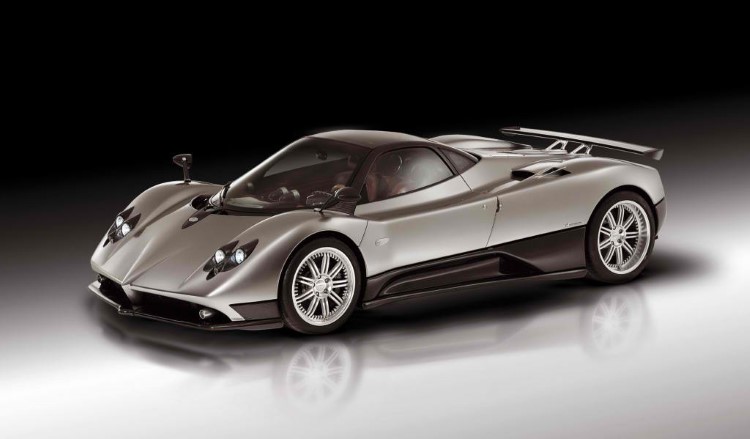 The Pagani Zonda is a sports car manufactured by the Italian carmaker Pagani. It debuted in 1999, and production ended in 2011 but not before Jay-Z could purchase his own. Its top speed is 231 mph and it has a 0–60 mile per hour acceleration time of 3.2 seconds. Much of its engineering was done by Formula One race champion Juan Manuel Fangio, and at first glance, it is unmistakably a race car. 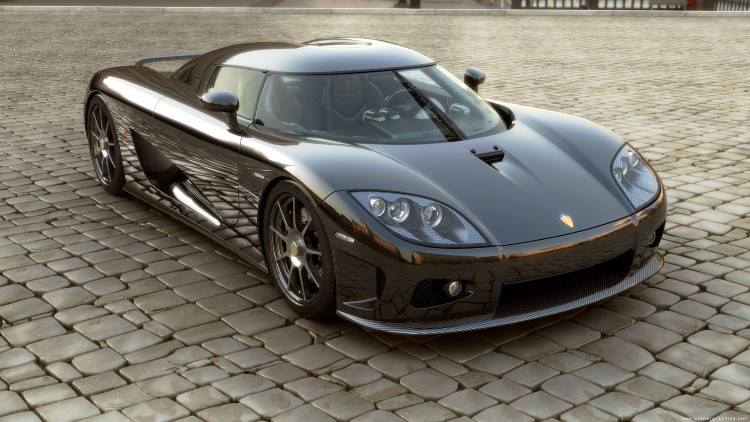 The Koenigsegg CCXR Trevita is one of the most expensive cars in the world. The famous boxer, Floyd Mayweather purchased a Koenigsegg CCXR Trevita last year. It came with the style of a futuristic race car and a top speed of 254 mph. A Google search of “most expensive car in the world” will give you this result. The Trevita is one of most breathtaking, rare and expensive celebrity cars on the market.
1. Maybach Exelero – $8 Million 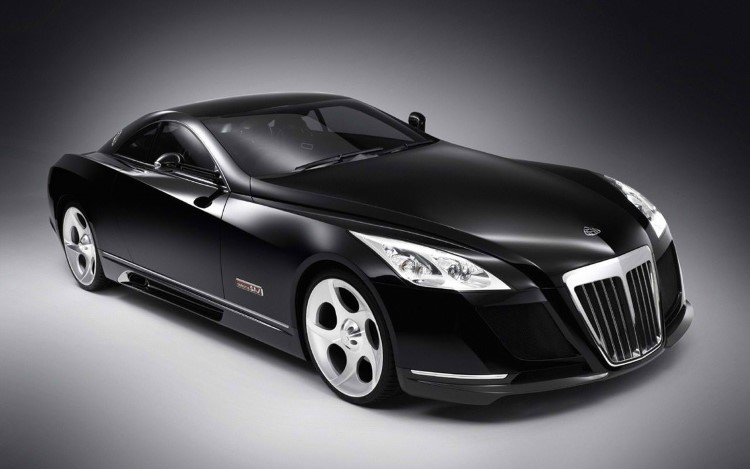 The Maybach Exelero is a high-performance unique sports car built in 2004 and capable of reaching 700 hp with its V12 twin turbo engine. Jay-Z can be seen driving the Maybach Exelero in one of his music videos – and who could blame him? This car can reach a max speed of 218 mph.