Although when we look at sports cars we often discuss their top speeds, it is their acceleration that makes the difference on a day to day basis. With these supercars, you’re rarely ever going to be able to push them to 200 mph – there’s just not enough road for that! However, you’ll find yourself constantly tempted to race other pretenders when you’re sitting at a red light. In these cases, it’s the 0-60 speed acceleration speed that should indicate how much of a rival a rival really is.

Our list of 20 fastest accelerating production cars may contain some surprises. For instance, you don’t need to spend a fortune to compete with million-dollar supercars. All of our choices will get you from 0-60 in less than three (yes, three!) seconds. Gentlemen, start your engines! 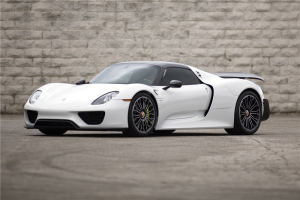 When a driver wants a production car that can accelerate very quickly and wouldn’t be out of place racing at Le Mans, the Porsche 918 Spyder is the right choice. It was the first ever production car to have a lap of the Nurburgring timed at under seven minutes. It will go from 0 to 60 in 2.2 seconds. The 4.6 liter V-8 engine and connected electric motors can produce over 600 horsepower.