The History of the Mercedes SL

Even if you are not a car enthusiast, you are certainly familiar with the image of a Mercedes SL. For the better part of the last 70 years, this car has been a definitive Mercedes product and an undeniable symbol of wealth and success. Started in the early 1950s, the story about the Mercedes SL is one of the more interesting sagas in the whole history of the automobile industry. From the modest beginnings, as a purpose built race car in war-torn Germany to must-have accessories of successful yuppies all over the world, the SL evolution was quite specific. And although some enthusiasts say that its racing roots were soon forgotten in favor of wider appeal and better sales, SL has always retained a sense of performance and speed as a reminder of its glorious past, even if driven slowly on the boulevards.

Besides the fact that the Mercedes SL was always a prestigious machinery which was proudly displayed by its owners, the value of it was far more than just an expensive ride. Mercedes always invested an enormous amount of time and effort into its construction, new materials, new technologies and quality, all of which has put the SL into a class of its own. The SL was always a competent car, capable of awarding its owner with unmatched pace and speed if needed, and was often out-performing contemporary sports cars. In a word, it was a car for jumping continents in fast Autobahn blasts as well as slowly cruising through the crowded streets of the French Riviera. So, let`s see how the legend of the Mercedes SL came to be. 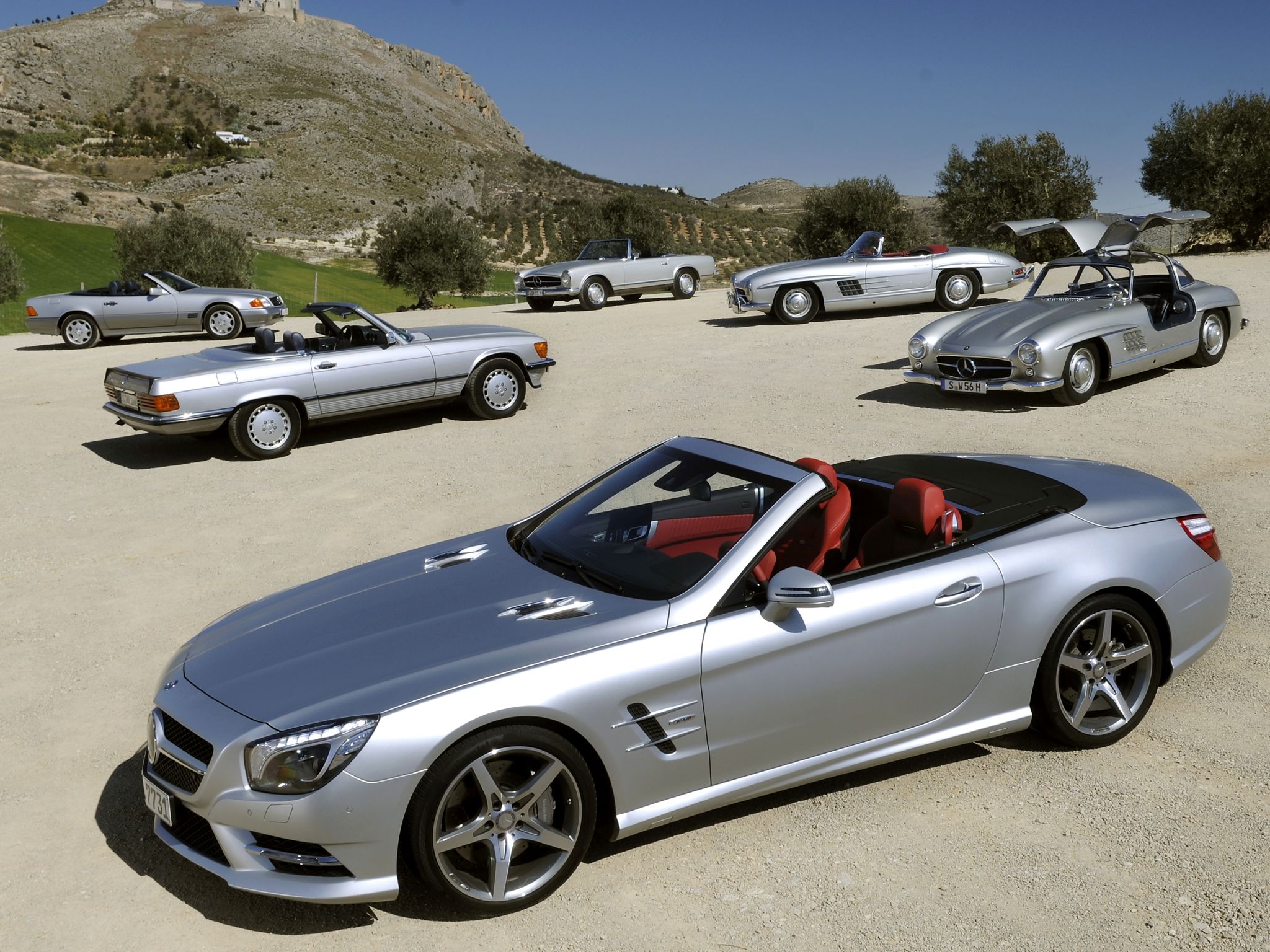 After the end of Second World War, Mercedes was in terrible shape, as was the whole German car industry. The company barely existed and the market for its cars was very limited. But even in that kind of circumstances, maverick engineers from Stuttgart knew that racing is a way to attract buyers and present the company`s know-how in the best possible light. So, in the early 1950s, the W198 300SL was born. It was a pure racing car with highly tuned and fuel injected 3.0-liter straight six engine, and with a host of advanced technical solutions, never seen before on any racing or road going vehicle. As expected, it was very successful on the racing tracks and in SLR form on famous races like Targa Florio, Mille Miglia and 24 Hours of Le Mans. Mercedes didn`t have the intentions of making it a production model, but Max Hoffman, the Mercedes importer for the USA, was very persistent and suggested the company that the car could be a sales hit if offered as a road going version. The company was reluctant but in 1954, it introduced the Mercedes 300 SL “Gullwing”. 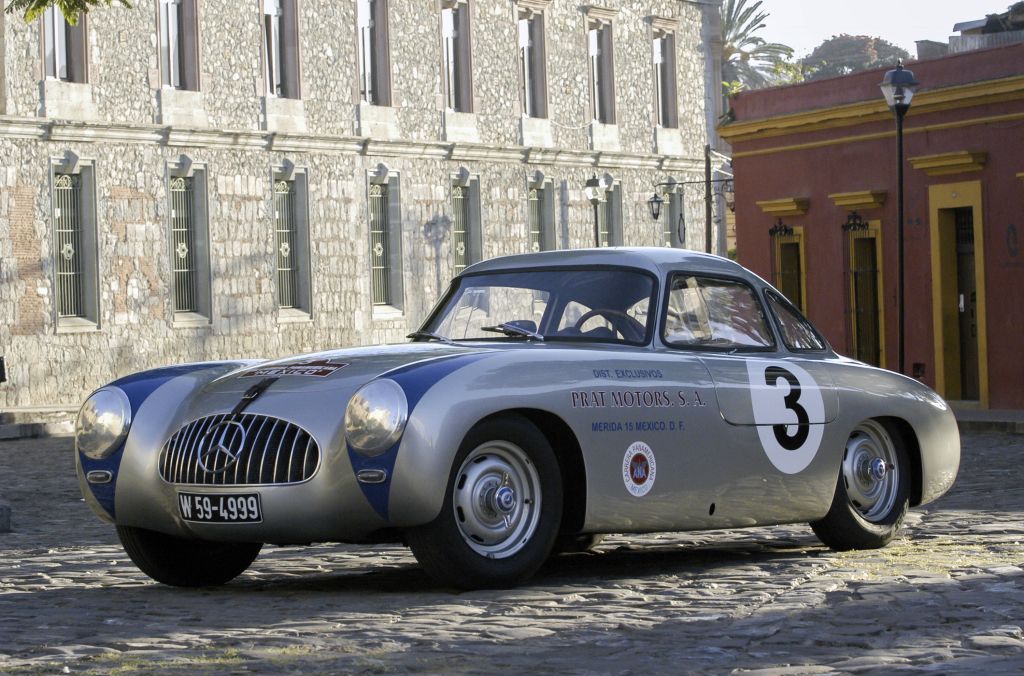 This was a racing car on which you could put license plates with the same engine and same technology as its track-going cousins. The main feature were “Gullwing” doors which opened like the wings of a seagull and were a necessary item since the space frame chassis construction left no room for ordinary doors. The 3.0-liter straight six engine produced from 215 to 225 hp, a big number for the day. The engine had mechanical fuel injection system which was very advanced at the time. Of course, the car was very fast and expensive making it very prestigious, but still it sold pretty well and in just a few years, 1.400 were made with 80% of the production being sold through Max Hoffman dealerships in America.

A couple of years after the introduction of the Gullwingcoupe, Mercedes-Benz presented the Roadster version, again on the suggestion of Mr. Hoffman. This was a true soft top car with heavily revised chassis in order to fit regular style doors. The Roadster proved to be even more popular than the coupe with 1.858 examples built, but it was somewhat less agile and fast due to more weight. Ever since the production stopped in 1963, 300 SL both in Gullwing and Roadster form has been sought after by collectors and enthusiasts, and their prices have been rising steadily. Today, a 300 SL in perfect condition is worth more than 1 million dollars. 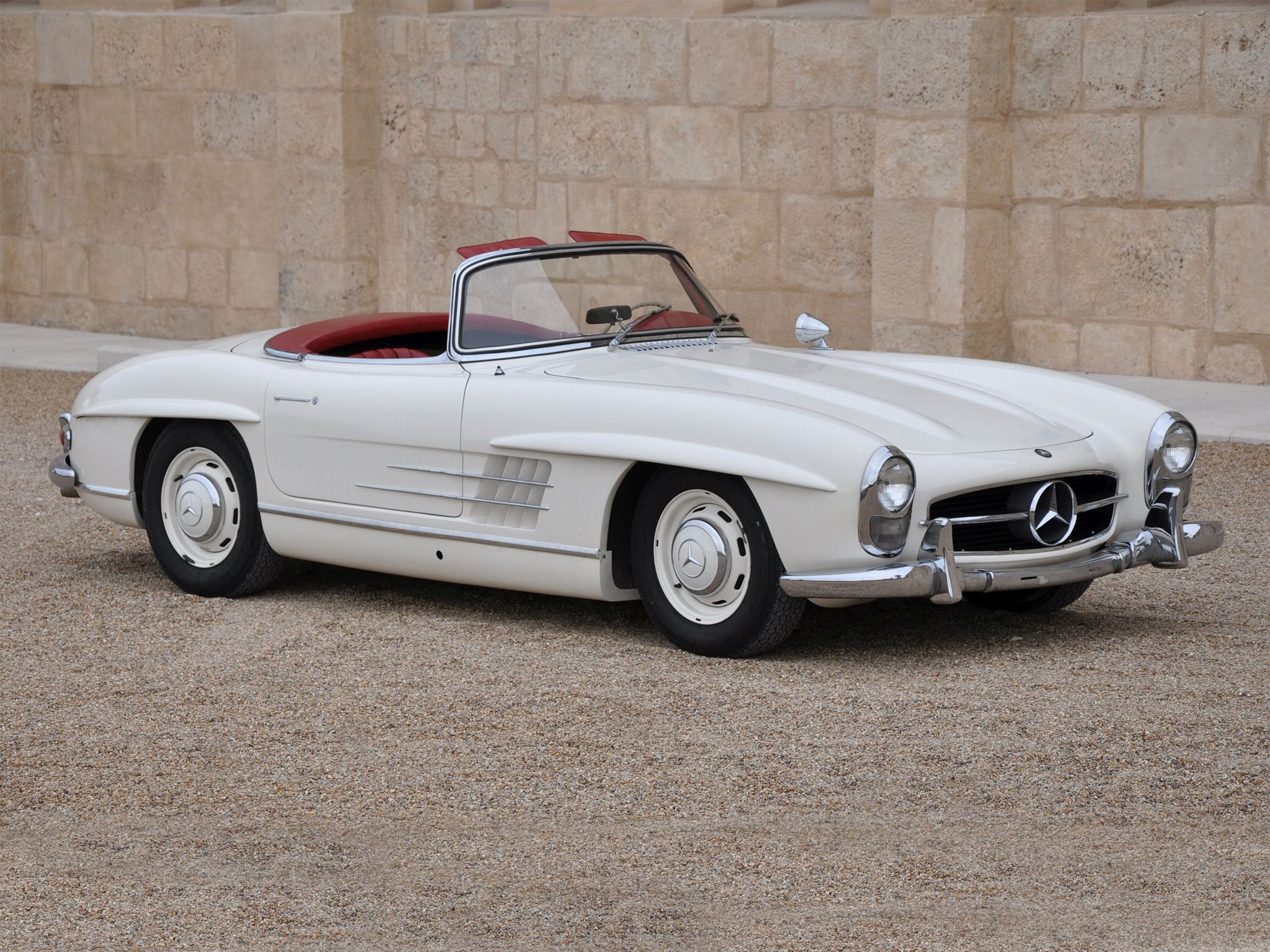 Despite the fact that the 300 SL stole all the sports car headlines in the 1950s, Mercedes knew that it would not sell in high numbers and that the profit, in fact, would be very small. So, the company found the way of selling 300 SL`s great looks and style for a much lower price and to a much wider audience by introducing the 190 SL in 1955. This was a baby 300 SL, built on modest Ponton sedan platform and with a four cylinder engine producing 105 hp. For the standards of the day, this was a decent power figure with appropriate performance. 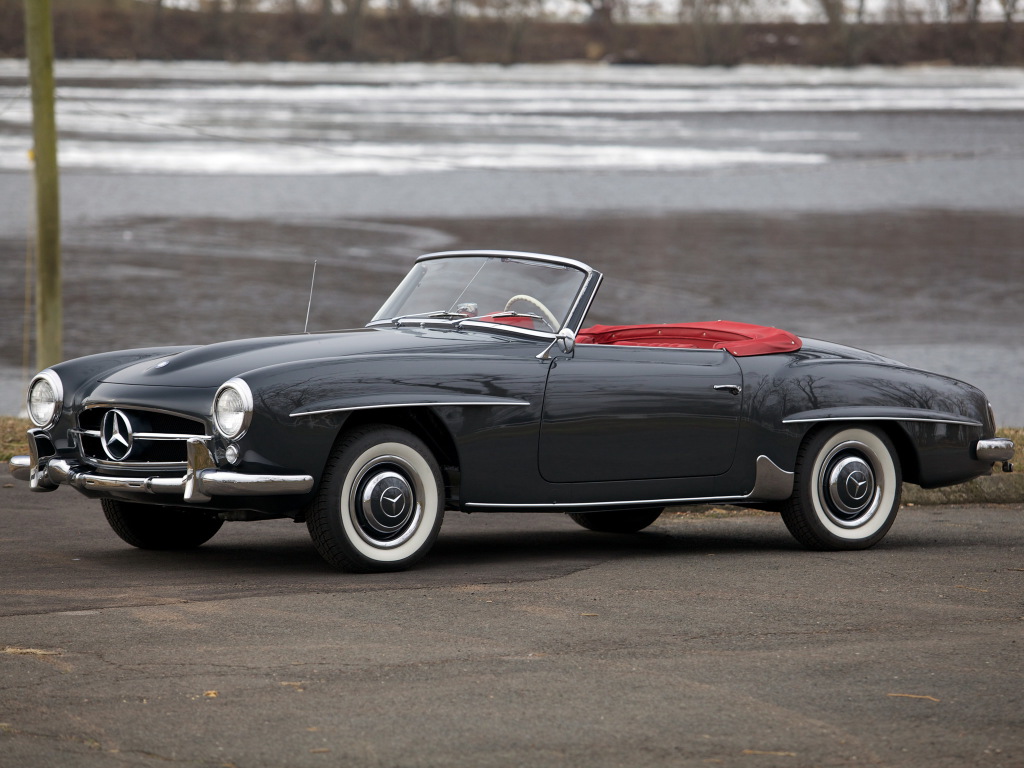 The 190 SL had advanced suspension settings, similar to the bigger 300 SL but the space frame chassis was ditched in favor of more conventional and cheaper, Ponton sedan frame. The design of the 190 SL was very similar to the 300 SL Roadster although the car was significantly smaller and only available as a convertible. The production lasted until 1963 and Mercedes successfully shifted over 25.000 copies of the 190 SL which are also very popular classics today. 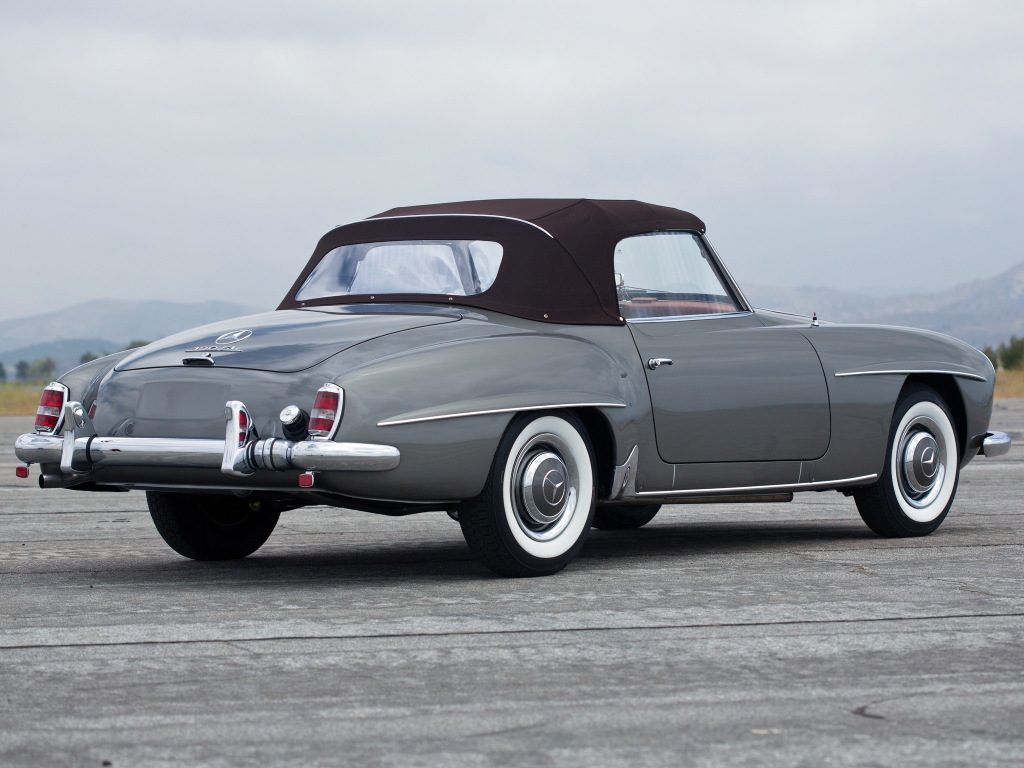 The racing success of the 300 SL and its prestige convinced Mercedes that the successor is a must, but sales success of the 190 SL paved the way for a new model. Smaller, modern looking and more user-friendly model was a way to go and that was exactly the next generation, introduced in 1963. The new model, internal code W113, had brand new chassis, new engines, and a new look. It also only came as a hard top convertible. In fact, that hard top gave the new model its nickname – Pagoda. The Mercedes-Benz chief designer, Paul Bracq gave the new SL slightly concaved roofline of the hard top which inspired the nickname. 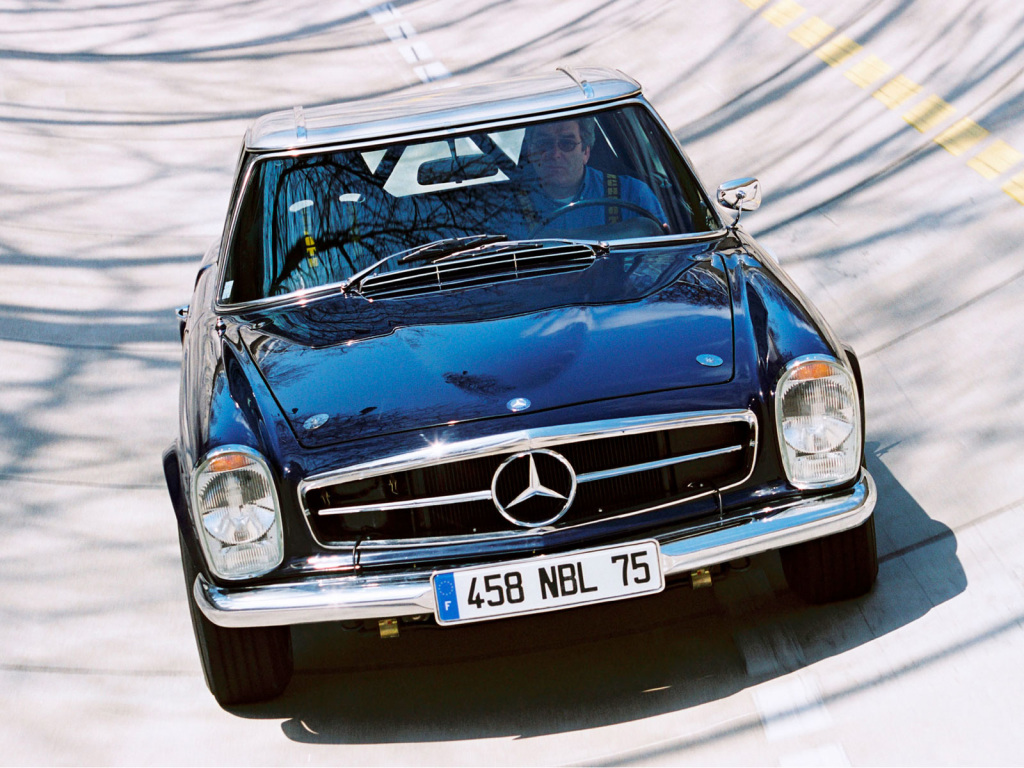 Initially, the car came with a 2.3-liter six cylinder with 150 hp which was replaced by a 2.5-liter unit developing the same power but with more torque. The biggest engine available was the 2.8 liter straight six which had 170 hp and it is now considered to be the best choice for the Pagoda, not only for its power but for the refinement and overall characteristics. 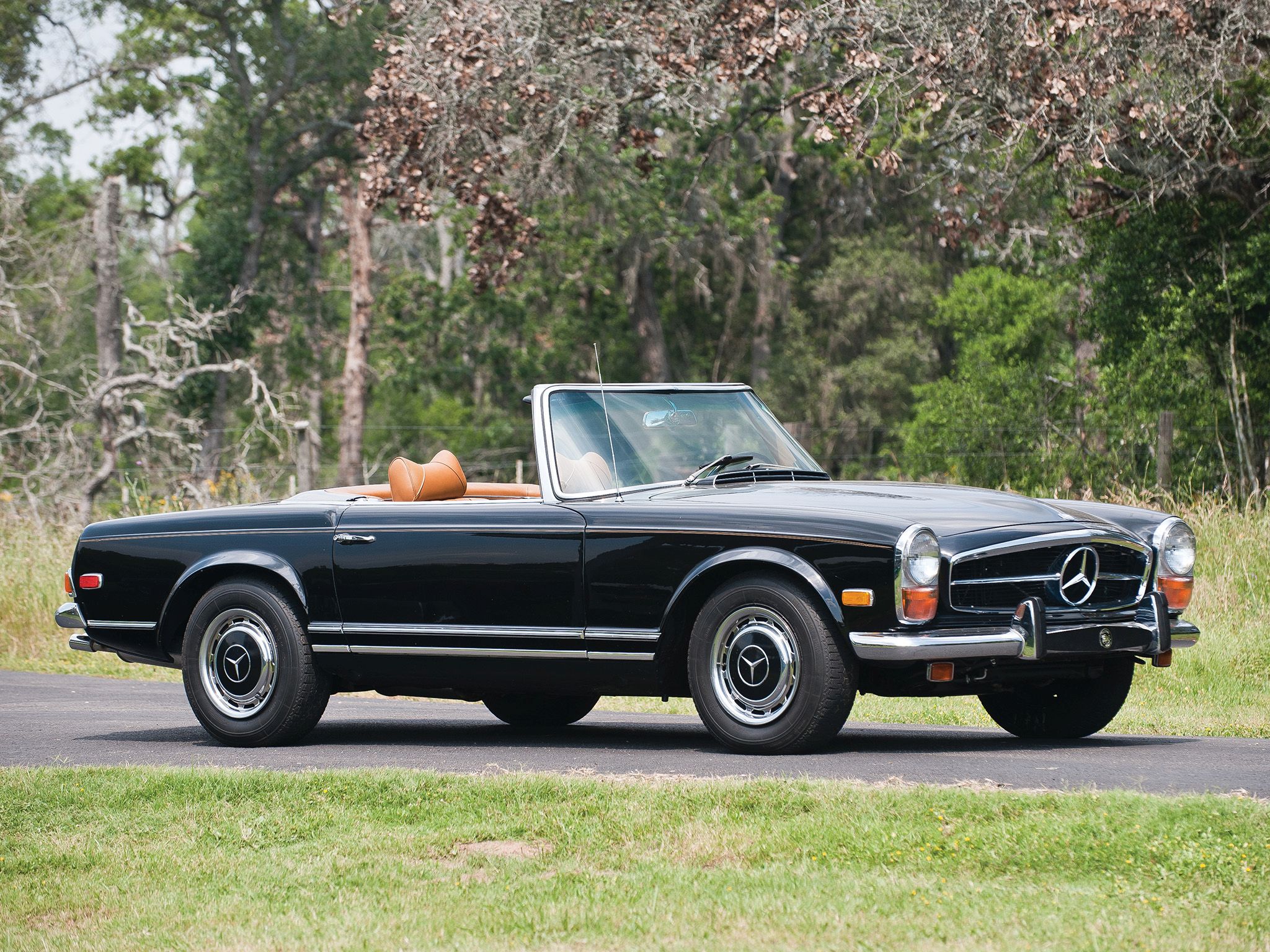 The Pagoda stayed in production until 1971 and became the most successful SL model up to this point with over 48.000 produced. It wasn’t a sports car per se, although it had the capability of outrunning some Porsche 911s, but it was a power roadster with enough speed to make things interesting, yet enough grace and style to be a comfortable cruiser. Despite a few privateers entering Pagodas in some races, the company never supported any racing program. 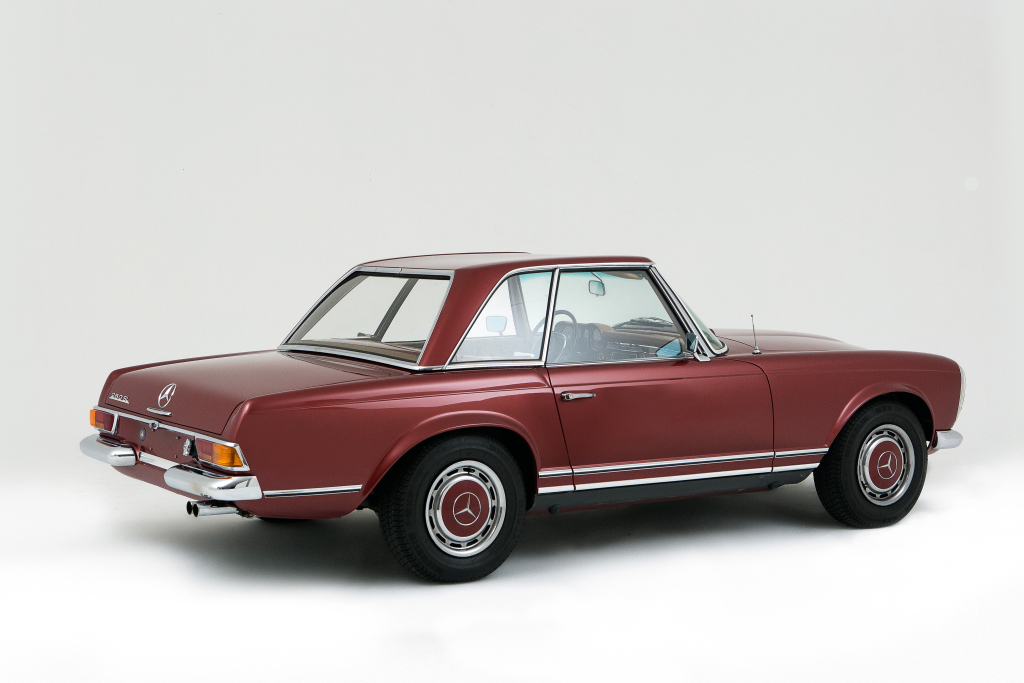 The W113 Pagoda was still relatively up to date model when in 1971, Mercedes shocked the automotive world with the introduction of the R107 generation of the SL. For the early `70s standards, this was a very modern looking machine, with new technology, powerful engines, very advanced features, creature comforts and quality. In fact, the signature quality of the ’70s Mercedes-Benz products is best visible on this car and earned it a nickname “Panzer Wagen”. 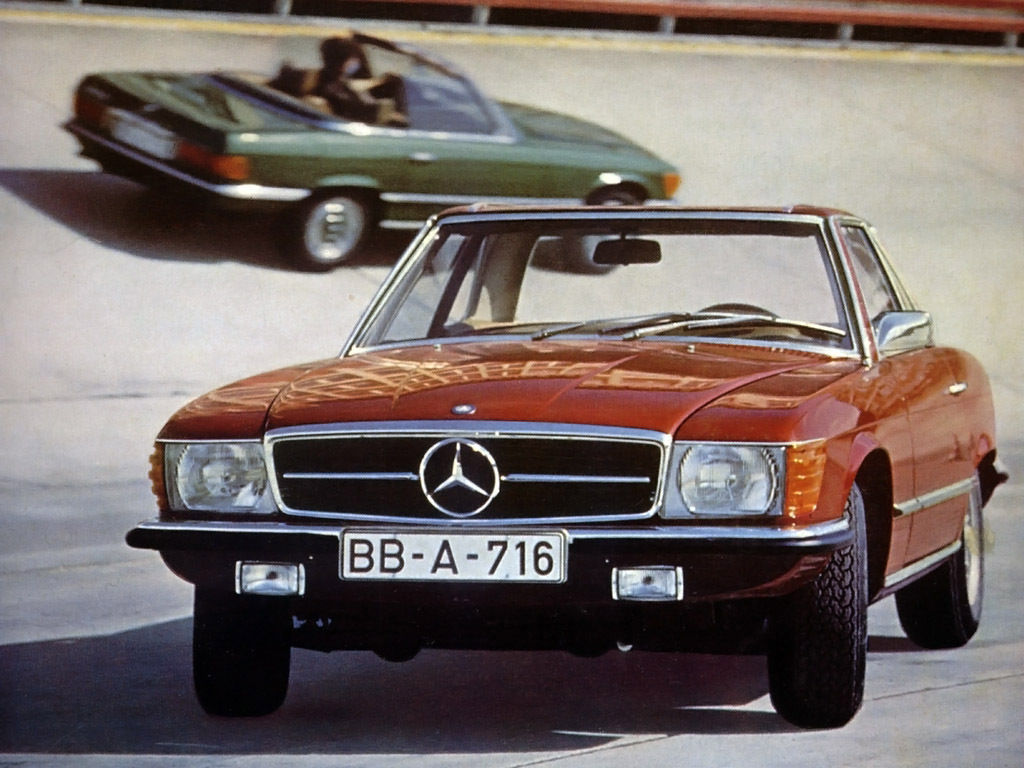 In contrast to the previous models, this generation was a true GT model, made for effortless and fast cruising, comfortable ride and smooth handling. Despite the obvious power and performance figures, this car is best at highway speeds and not on twisty mountain roads. Initially, it was offered only as a roadster with a hardtop, but Mercedes also presented the SLC variant. The SLC was a full coupe version with slightly longer wheelbase, space for four occupants and a bigger trunk. It was available until 1981 and presented an interesting alternative to two-seater open top regular SL model. 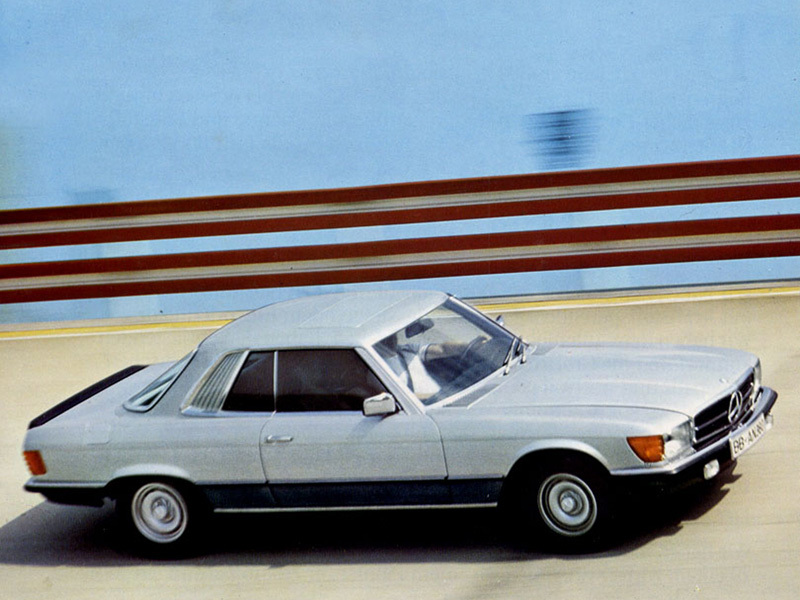 Despite the economic recession of the `70s, sales of the Mercedes SL was always very good and buyers could choose from two six-cylinder engines and six V8 units, as well as a long list of additional extras. Due to imposed safety regulations, Mercedes SL was among the very few open top cars on the market and if one wanted a luxury convertible it was the only real choice. That is why it had become one of the symbols of success during the `70s and the `80s and a common décor in movies and TV shows of the era. Although it was never intended as a racing car, Mercedes enjoyed considerable success with the 450 SLC rally car.

After 18 long years spent in production, the end finally came in 1989 after over 300,000 examples made, which is a fantastic number and a true testament to quality construction, prestige and value of those “Panzer Wagens” 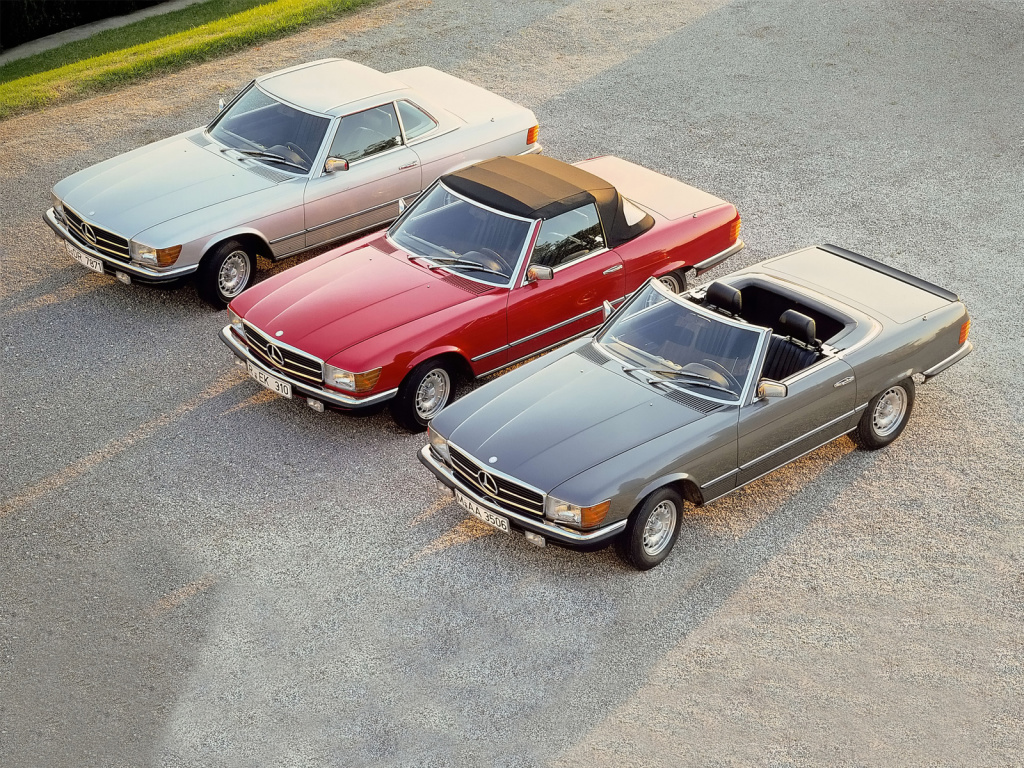 Mercedes knew that the successor of the extremely popular R107 generation must be a special car and spent years developing the next generation SL which finally debuted in 1989. Everything was new, starting from the design, technology and the engines. Despite the new looks, the R129 model was unmistakably a Mercedes SL with its signature grill, silhouette, and rear end. The basic layout of a GT convertible model was unchanged, but Mercedes invested heavily into ride quality, power delivery and stability systems. It was only available as a convertible with hard top. 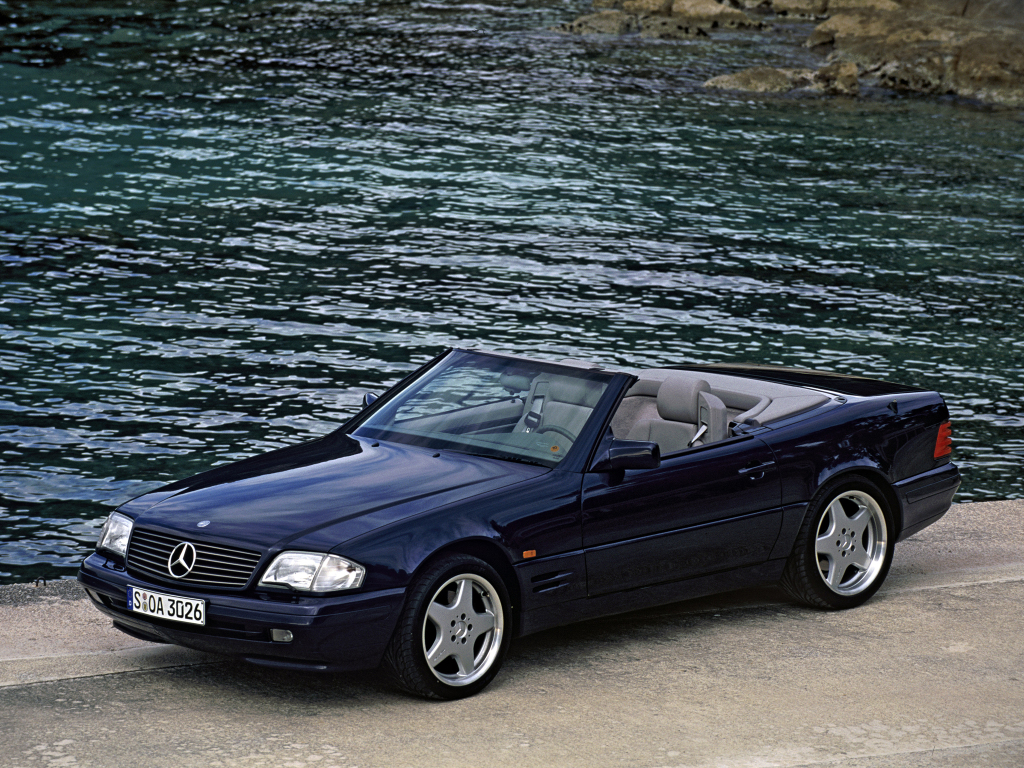 Mercedes offered numerous engine options and trim levels as well as a long list of optional equipment. Although this wasn’t a sports car, it had quite nice performance and top speed. For the most demanding customers there were AMG versions with as much as 525 hp from the 7.3 liter V12 engine. Over its 12-year lifespan, R129 changed very little despite one restyling and was constantly in demand and sought after. That is why it sold in 213.000 examples which was an amazing achievement for Mercedes and a totally deserved success knowing the quality and performance of this model. 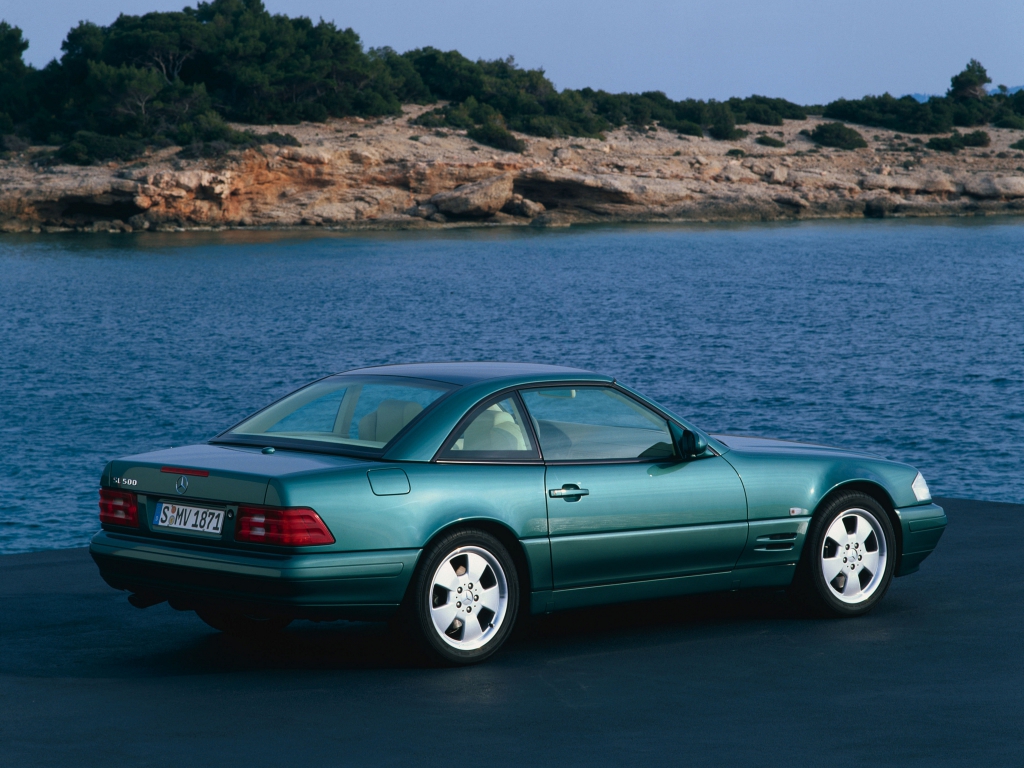 Even though the R120 was a strong seller, Mercedes introduced a new generation in 2001 and it was a proper SL for the 21st century. It featured a new design language, aerodynamically improved body and revised engine and mechanics. It was the right car for the time and presented Mercedes’ technical superiority in best light. This was the first SL to be delivered only with a folding hard top which combined the best of both worlds: convertible open air feel with safety and comfort of a coupe. 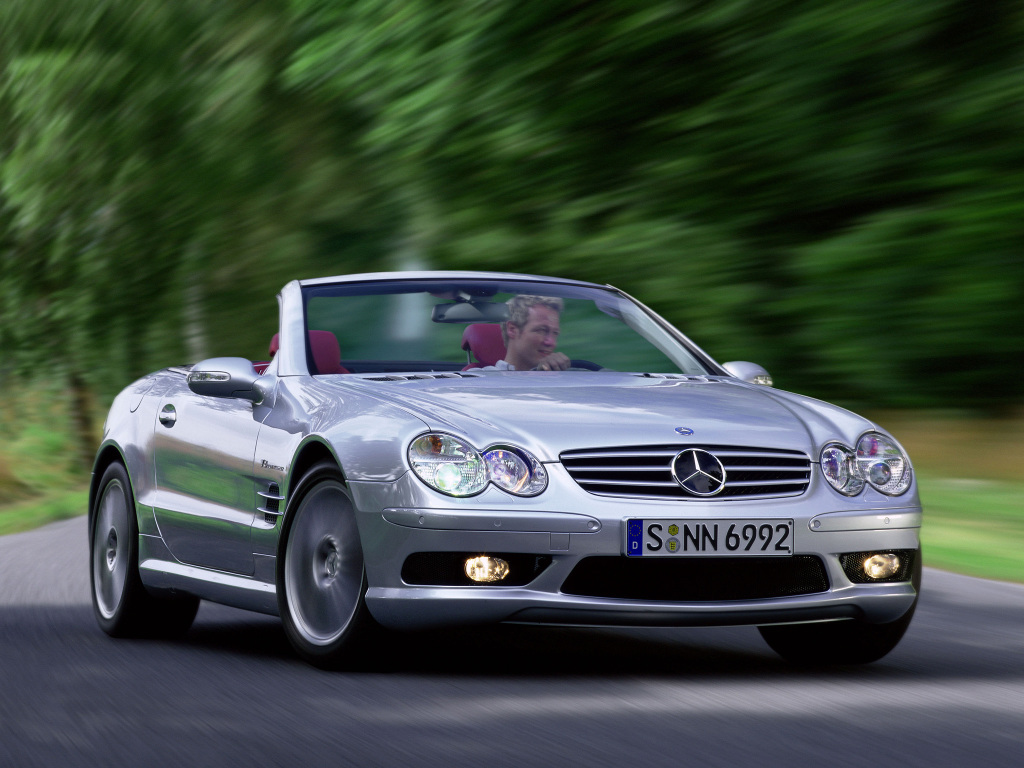 As expected, the new SL came fully loaded, but Mercedes still offered numerous extras and optional equipment. The buyers could chose from eight engines, and 6.0 liter V12 was on top of the range. However, no manual transmission was available and you could only get automatic gearbox. 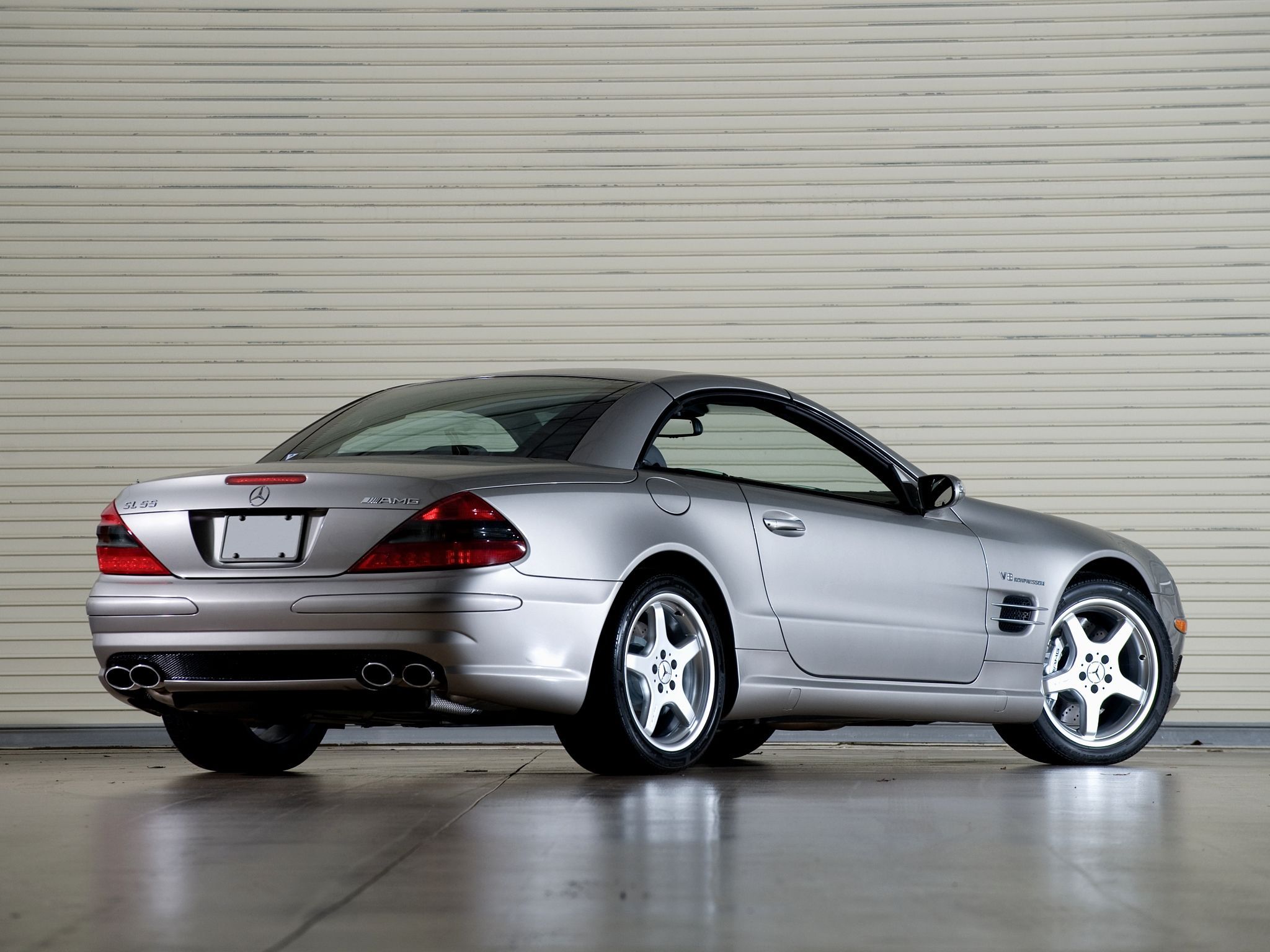 SL’s popularity and strong sales were never questioned since the SL was a landmark luxury car in its class. However, the SL wasn’t the only desirable model on the market and Mercedes experienced strong competition from Europe and Japan.

Numerous similar models from other premium manufacturers, inspired Mercedes to fully revise the R230 generation and introduce it as a new model for 2013, naming it R231. It was clearly based on the previous generation but the aluminum chassis was new, engines were improved and its design was restyled significantly. Of course, it was still a recognizable Mercedes SL and clearly a member of the SL family. 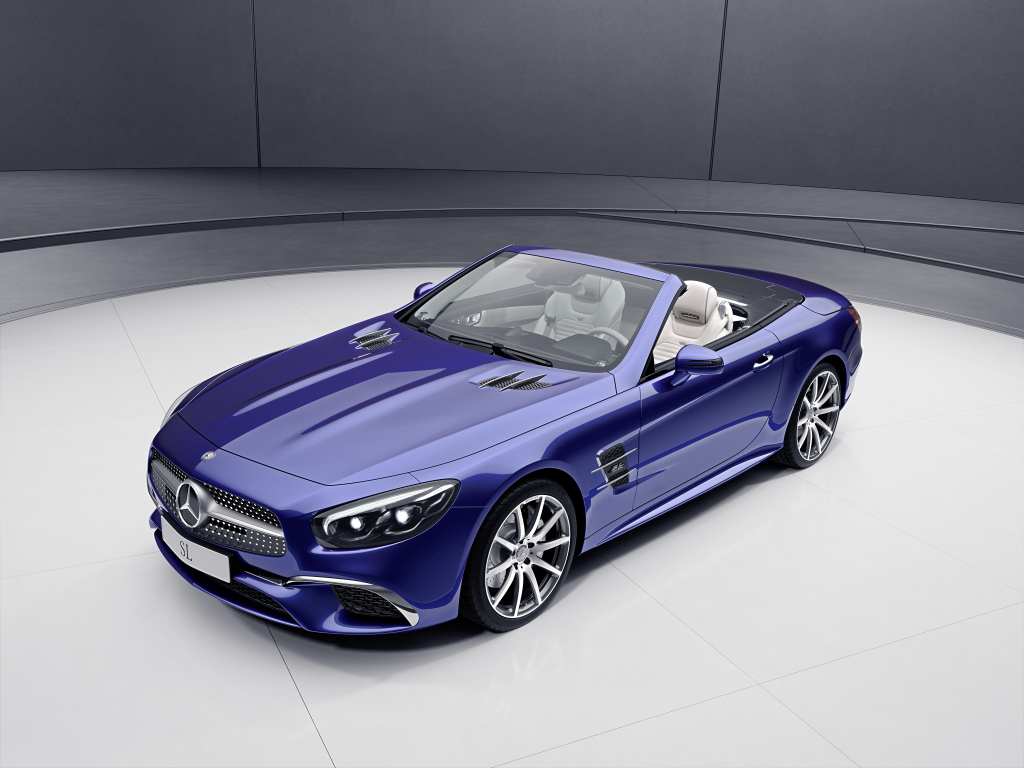 Mercedes concentrated on shedding its weight with new materials while also upgrading handling and road holding by introducing many electronic systems which helped this SL be a very capable and fast car. The engine choices were down to five units with the top-of-the-line being a 6.0-liter V12 with 630 hp and brutal acceleration figures.

The interior is also totally new, and new materials and design make it one of the best places to spend time in if you are a wealthy car enthusiast and want to enjoy some sunny weather cruising on the coastline highways.