The True History of the Dodge Pickup Truck

If the Ford Model T kickstarted the automotive America, pickup trucks of all shapes and sizes helped build it and became the quintessential American vehicle class and one of the strongest symbols of the country. In the early days of the automotive industry, almost every manufacturer had some kind of a pickup truck in their model lineup. But as the industry grew and customers became more demanding, just a couple of companies survived. Among those, Dodge and their B, C, D Series and Ram trucks were among the most famous and popular models. Dodge was one of the pioneering companies in this market which has been introducing a lot of new technologies over the years. Constantly battling Ford and Chevrolet, Dodge was able not only to outsell the competitors on a couple of occasions, but to become dominant in some foreign markets too.

The true history of Dodge pickup truck starts as far as the late 1920s when Dodge Brothers introduced one of the first true pickups, the model actually constructed as a pickup rather than a chopped up sedan. This approach proved very successful and Dodge trucks immediately became a symbol of durability and quality in rural America. In the early 1930s Dodge introduced its famous Ram logo on the nose of their truck as a sign of their ruggedness and power. It was used through the 1950s and returned in 1981 when the new generation of trucks was introduced and the name Ram officially returned. Before that, Dodge produced trucks named after letters of the alphabet (B, C, and D Series) and we will cover Dodge trucks made after the Second World War only, since they are the most relevant, sought-after by collectors and they show the evolution of Dodge pickup in the best light. 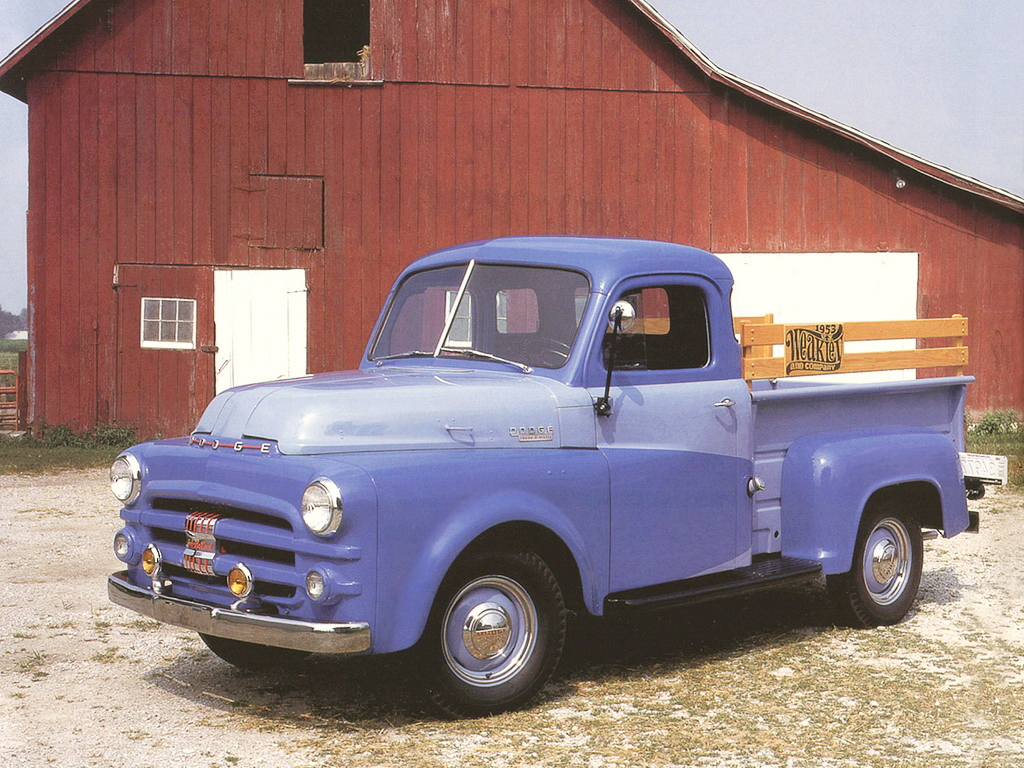 The post-war economy in America was in need of working vehicles and Dodge jumped to the opportunity presenting a fresh new B-Series pickup truck in 1948. It was modernly designed and well built, however with fewer options compared to the competitors. Those were simple and rugged vehicles for working people, affordable and cheap to maintain. In other words, perfect for working America and countryside. Dodge produced a few variants in terms of payload and even sold naked chassis to the commercial buyers to turn them into vans, delivery vehicles or buses. The main selling points of the B Series were simplicity, strong engine, roomy interior, and tough mechanics. Just want you would need in a vehicle like this. 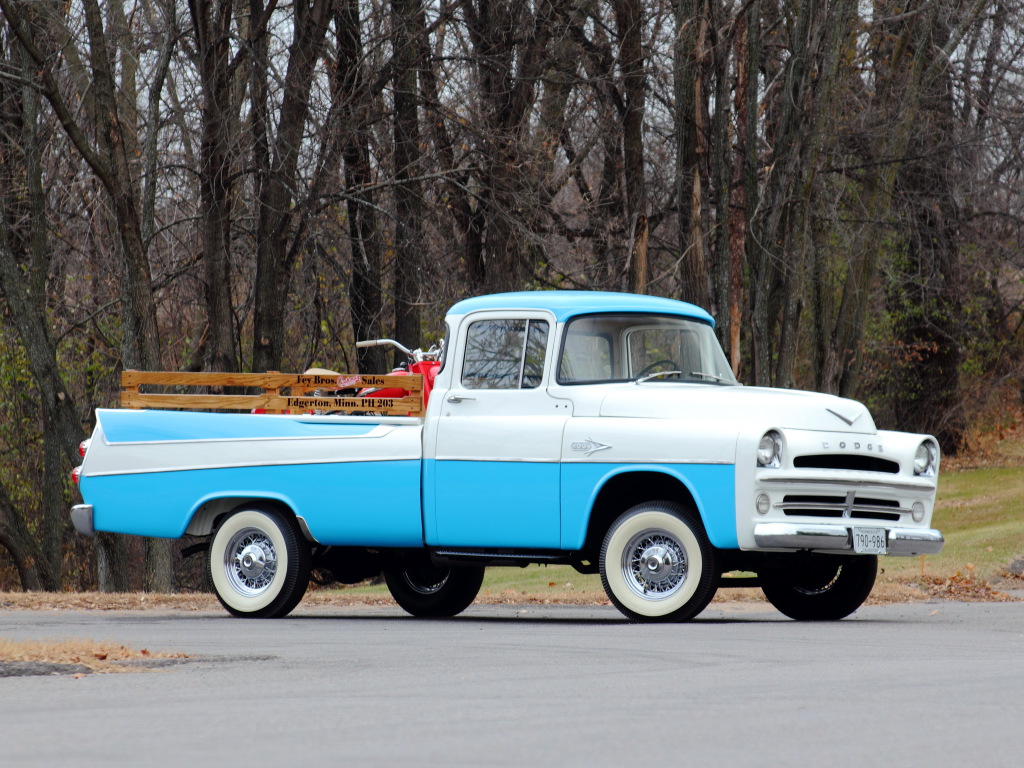 Due to stronger competition and declining sales, Dodge presented a brand new model for 1954 which had a totally new chassis, body and engines too. It was one of the best looking trucks on the market and Dodge implemented the tail fins from passenger cars to a square truck design creating one of the biggest design icons of the 1950s. Besides that, every C Series was equipped with powerful straight six and V8 engines and Dodge introduced automatic transmission, power steering and brakes, and a 12-volt electrical system. Compared to Chevrolet and Ford trucks, Dodge was best equipped and arguably best looking of them all. Of course, many variants were offered from basic specification work trucks to the upscale “Sweptline” two color versions. 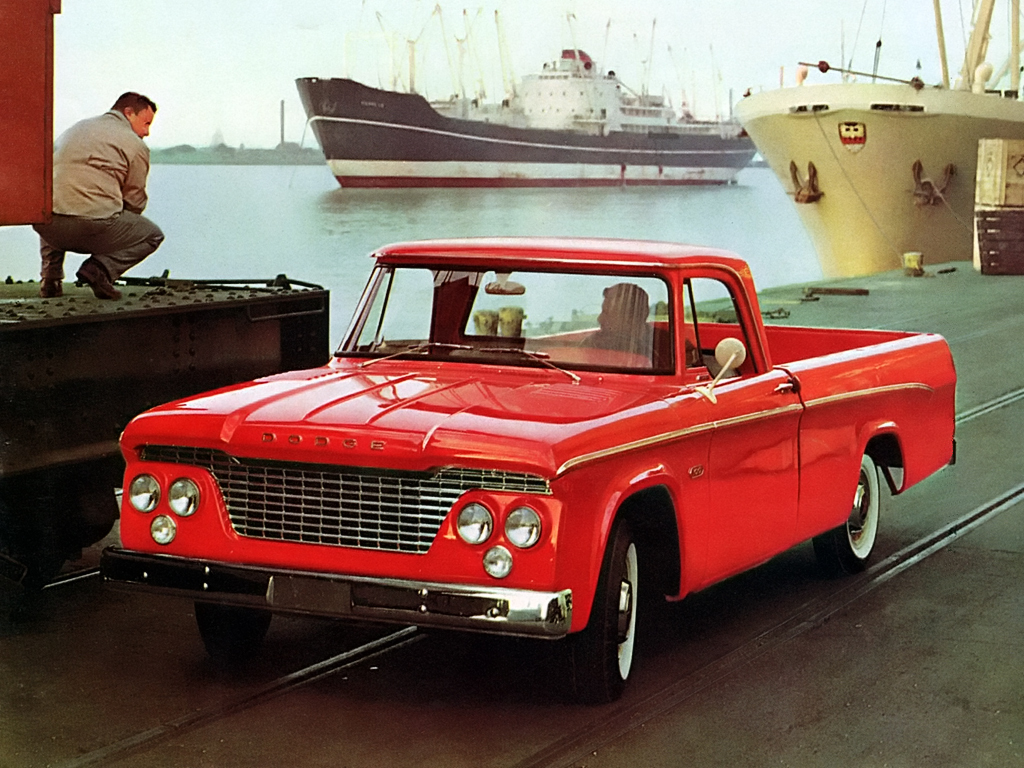 Dodge D Series was one of the longest running pickup series in the industry and it started in 1961 as a fully modern and redesigned product with new components, engines, and drivetrain. It featured a selection of straight six and V8 engines and trim levels as well as different lengths of the truck bed and different payload options. This model proved to be very successful and well received by the customers and the motoring press. Dodge even had pretty substantial export results as D Series trucks were exported all over the world and even assembled in South Africa and Argentina. The interesting option was Custom Sports Special, a performance version of a regular D-Series truck equipped with the big 426 Wedge engine with 365 hp and revised suspension. This was the first performance truck, decades before Ford SVT Lightning. However, the Custom Sports Special was pretty expensive and rare, but it left its mark on pickup and muscle car history. 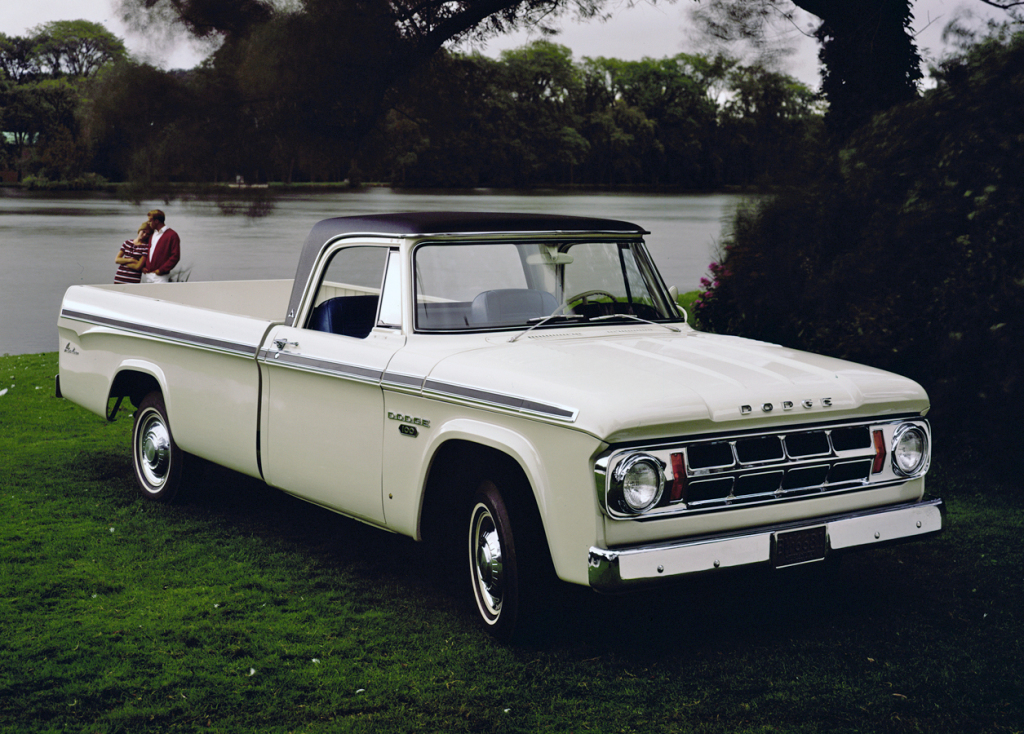 Dodge presented the second generation of its popular D Series truck in 1965 and it wasn`t much more than new body style with a couple of additional options like all-wheel-drive, interior features, and upgraded engine. The D Series was available as D100, a regular size truck and D200 and D300 which were bigger and more powerful versions for commercial users and construction workers. Buyers could get six engines and four trim packages, and Dodge kept the D Series more affordable than the trucks of their competitors. This resulted in good sales numbers as well as high export figures. This generation was even produced in Israel during the late ’60s. 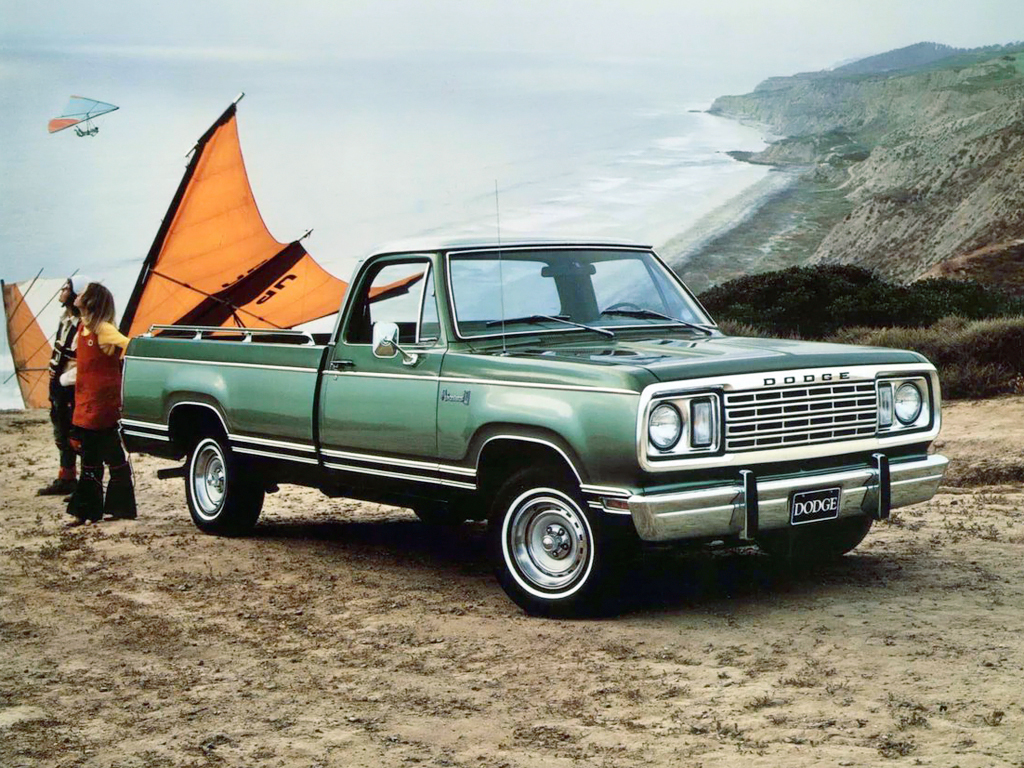 The third generation, in fact, was another restyle but it did present a fresh new styling, several new options, and independent front suspension, all of which was enough to call this model a new addition to Dodge’s commercial vehicle lineup for 1972. The design was totally different with a new front and rear end and revised cabin. With the choice of eight engines, starting from small slant six all the way to big 440 V8, pretty design and various trim level and choices, the third generation Dodge D Series proved to be a sales hit and widely popular. It was even used by the US military and exported abroad. Dodge even offered a diesel engine as an option which as their answer to the oil crisis of the early ’70s and lowering the power levels of gasoline engines. The diesel engine option had the necessary torque but it wasn’t well received by the customers. Dodge continued with the performance theme with the “Li’l Red Express” version of the D-Series which featured a big 440 V8 engine and a host of upgrades. It wasn’t just good looking, but also quite fast, and today it is regarded as one of the most interesting classic trucks. 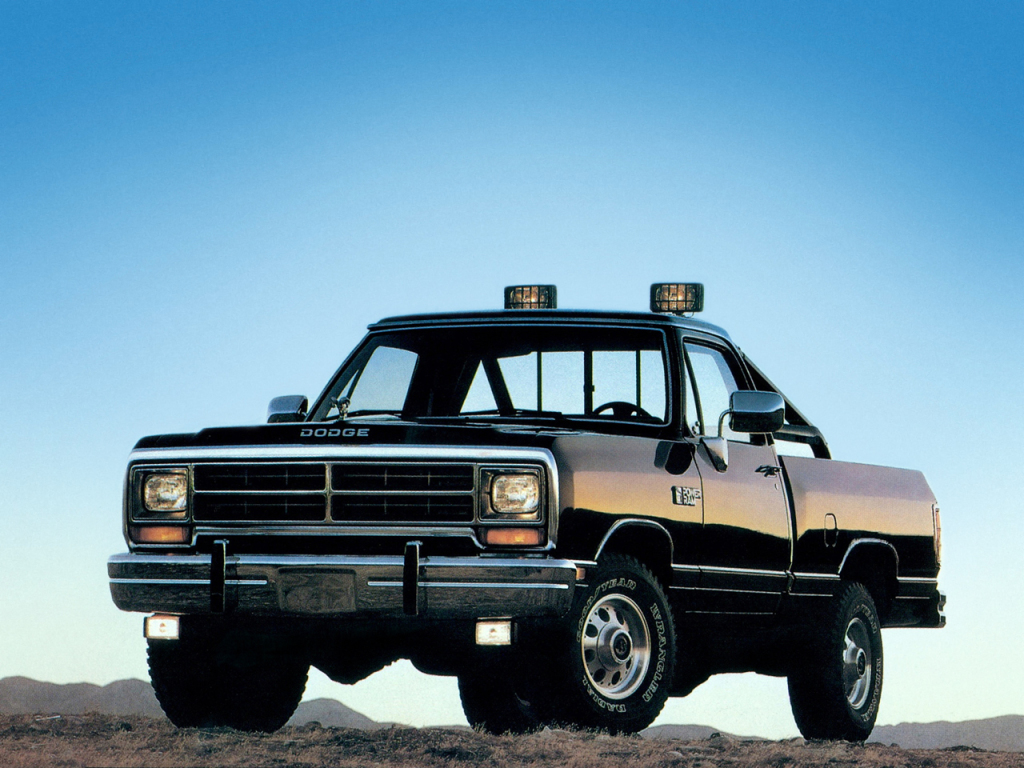 Chrysler was in significant financial trouble in the late ’70s. The D-Series trucks were good sellers but the rest of the passenger car lineup was doing poorly. So, when Lee Iacocca stepped as the company`s leader, one of the first things he did was to redesign the D-Series trucks and give them a new name. Iacocca chose the name Ram which connected current lineup with classic Dodge trucks and also symbolized ruggedness and durability. The name was well received and improvements in design, mechanics, and drivetrain proved that new for 1981 Dodge Ram pickup was one of the most popular models on the market. However, the basis of the truck was still decades old, but improvements and optional equipment made it relevant for the ’80s and a strong seller until the end of the decade. Dodge offered a wide arrange of engines including the venerable slant six and several V8 units. The diesel option in form of 5.9 liter Cummins engine was a popular choice for tow truck applications. However, by the early ’90s, despite all the wealth of options, engine choices, and equipment, the Ram was outdated and ready for replacement. 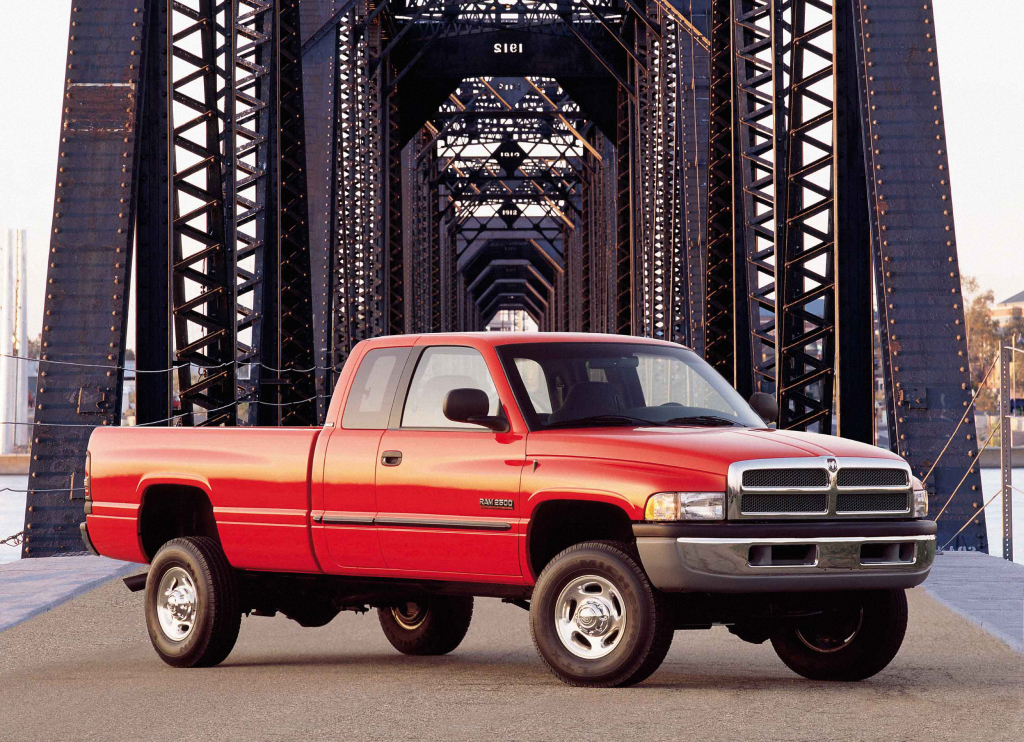 The second generation Ram was introduced in 1994. It was a big success for Dodge and one of the best pickup trucks of the ’90s. First of all, it was built on a totally new platform, with improved components and a bigger frame. Second, it featured one of the most iconic and brave looks in the car industry. Legend says that just before the release of the 1994 Dodge Ram, Iacocca wasn’t satisfied with the design because it looked too ordinary and gave the designers only 6 months to come up with something new. They did their job perfectly and presented him with the signature Ram design which is still influential to this day. The designers returned to the past and imagined how would a classic Dodge truck look like in modern form with separate fenders and a massive grille. The result was so good that the sales skyrocketed and Ram outsold closest competitors Ford and Chevrolet for the first time in history! Under the hood, engines were new or improved and its base unit was a 3.9 liter V6. Buyers could get V8 engines and even the massive 8.0 liter V10 sourced from the Viper! Diesel option returned with the Cummins straight six unit. As expected, Dodge offered various trim packages, additional extras, and different versions to suit the needs of all buyers. Big popularity of this generation was visible in popular culture and Dodge Ram starred in many Hollywood movies and TV series at the time. 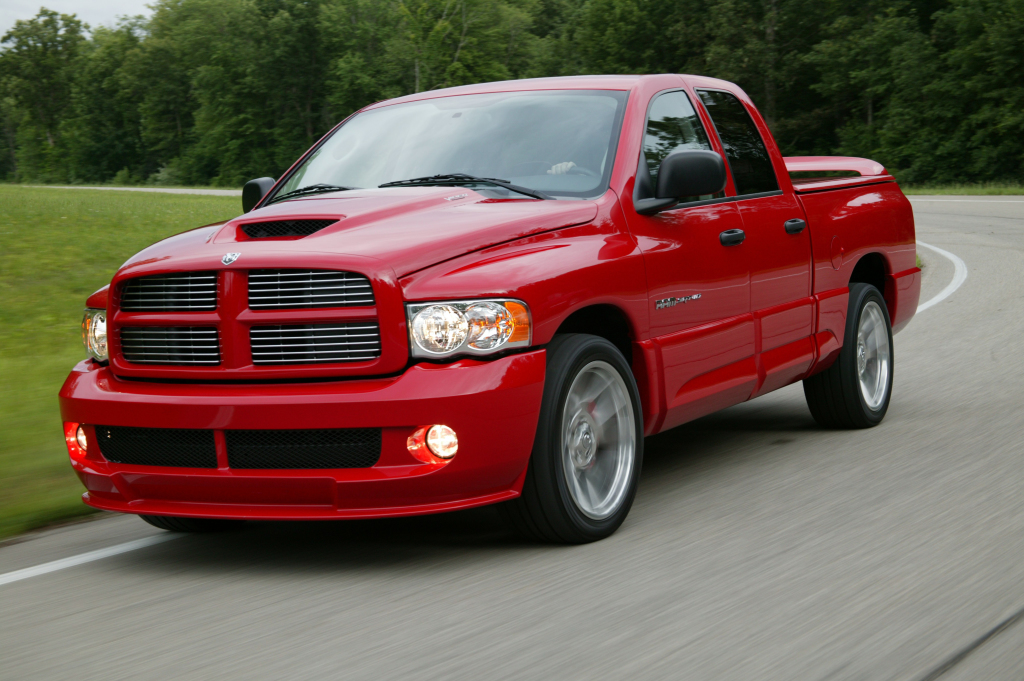 Dodge knew that the next model must be equally good if not better, and for 2002 model year an all new Ram truck with a new frame, improved suspension, fresh design and new engines was presented. The new model had massive fenders and a big chromed grill but with many improvements and more modern aesthetics. With the new frame came the bigger payload and towing capacity as well as more interior room and comfort. The engine list was enlarged with the addition of the legendary 5.7-liter Hemi V8 and mighty 8.2 liter V10 from the Viper which was installed in a special version called Ram R/T 10. This was a proper performance truck with crazy acceleration numbers and wild paint job. Dodge offered numerous trim levels and options which diversified the Ram model to be suited not only for work purposes but for lifestyle buyers and people who wanted a luxury truck. This generation stayed in production until 2008, constantly enjoying considerable sales success. 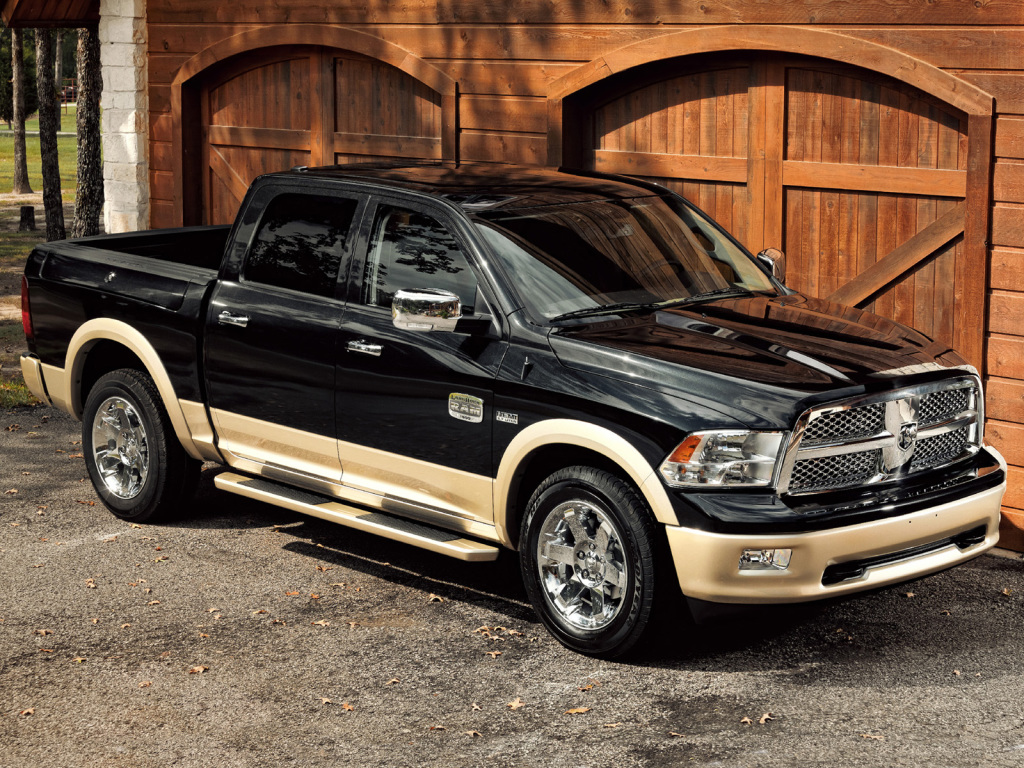 The latest and current Dodge Ram model was introduced in 2009 on an upgraded platform. The engine list has been revised with new diesel and gasoline engines and new transmissions. Towing capacity, as well as payload, are now higher than before and trim levels included the Ram Longhorn model, a luxury truck with some unique interior features. The crazy R/T 10 performance version is sadly gone. The design is fresh and modern, but it’s still a typical Dodge Ram with muscular front fenders and a big grille. In 2010, Chrysler moved the Ram trucks away from the rest of the Dodge model lineup and established Ram as a separate sub-brand. As expected, the new Ram is offered in numerous versions and configurations as well as naked chassis for commercial buyers. Despite being the oldest truck on the market, current-generation Ram is still is one of the favorites with the buyers and automotive press.