On construction sites, farms, and freeways everywhere you can see pickup trucks, America’s workhorse, plying their trade. Beds piled high, trailers full and strapped down, these vehicles are utilized in all 50 states by everyone from experienced contractors and multi-generational farmers to long haul truckers and families on vacation with a boat or an RV.

With the advent of the SUV in the early 90s, however, they suddenly had some competition. Sport utility vehicles with V8 and diesel offerings from the big manufacturers can go toe to toe against many trucks, and towing capacity isn’t just limited to these big machines. Anyone who has spent a significant amount of time traveling or plying Americas freeways has noticed all manner of makes, models, shapes and sizes of vehicles struggling to pull whatever random cargo is attached to the hitch. From the usual heavy-duty pickup trucks and SUVs to VW Bugs pulling Airstreams and Honda Civics towing jet skis, let’s take a closer look at some of the best choices for towing and hauling cargo around the continent. 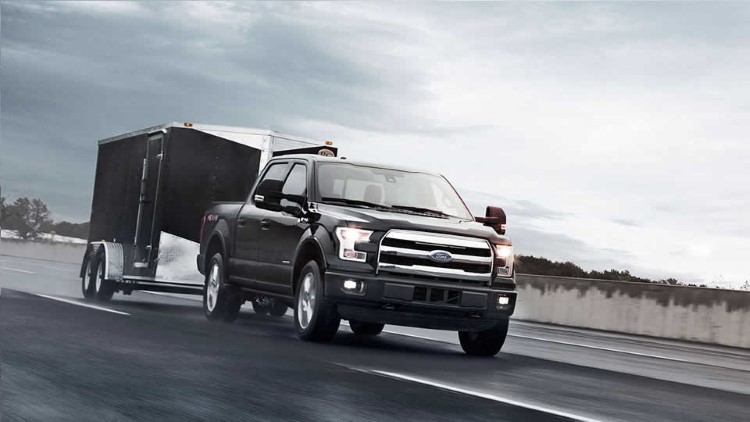 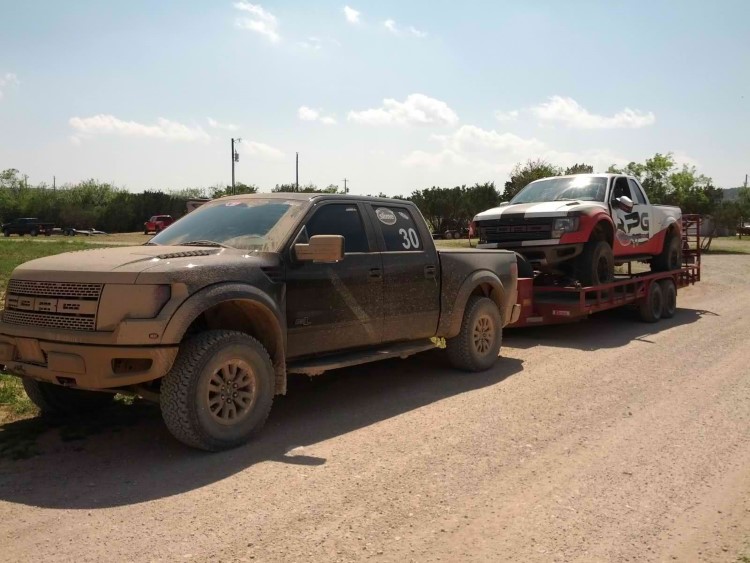 These sport driven off-road race machines may not be purpose built for towing or hauling, but they can still hold their own. Great for heavy-duty off-road use they have customized shocks and springs, a re-geared locking differential, 6-speed transmission and a 6.2L V8 making 411 hp and 434 pound feet of torque. 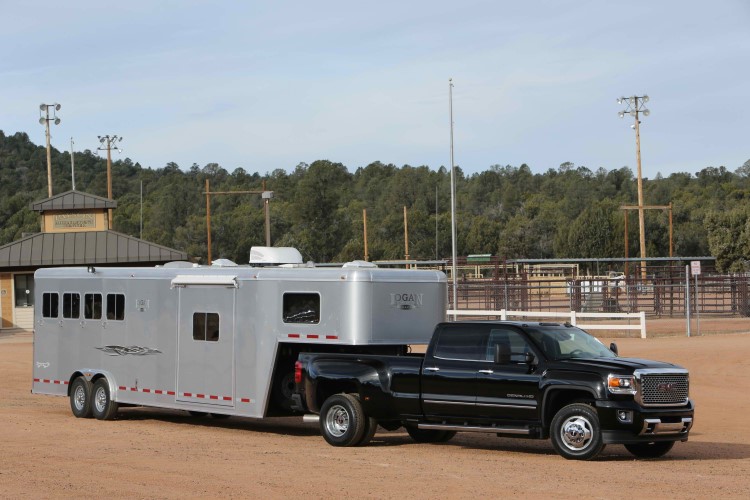 General Motors has been producing trucks for over 100 years now, and their current models showcase the century of engineering and design that turned them into what they are today. In the early 1900s, GM trucks were touted as being the best vehicles around, capable of driving cross-country while hauling heavy loads – and not much has changed today. The newest Sierra 3500 can tow a staggering 23,000 pounds while packing four full-size adults comfortably into the cab. 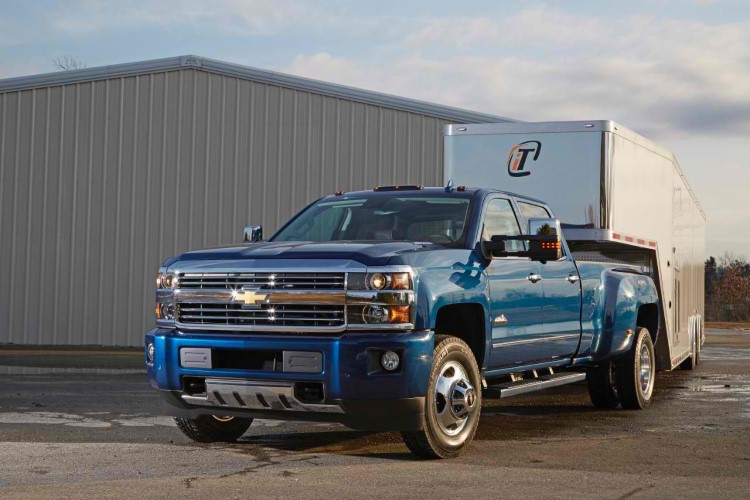 Chevy has built their reputation by producing dependable and hardworking vehicles, and the trucks they make are no different. The newly redesigned Silverado won truck of the year in 2014 and has been a bestseller for over a decade. The monstrous 3500 HD model puts out 400 hp and 750 pound feet of torque, and can tow almost 24,000 pounds.
Chevrolet Colorado 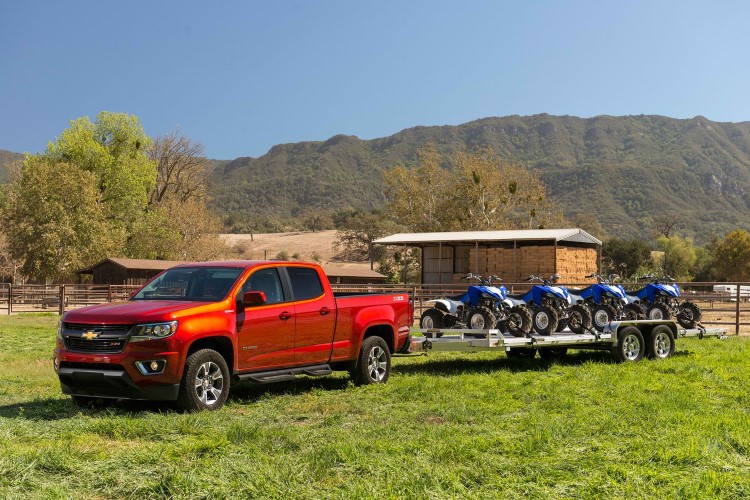 This midsize pickup from Chevy can get up to 31 mpg on the highway and tow 7,000 pounds. With smaller dimensions then the full size pickups it can be better suited to smaller jobs, but offers a high degree of versatility. 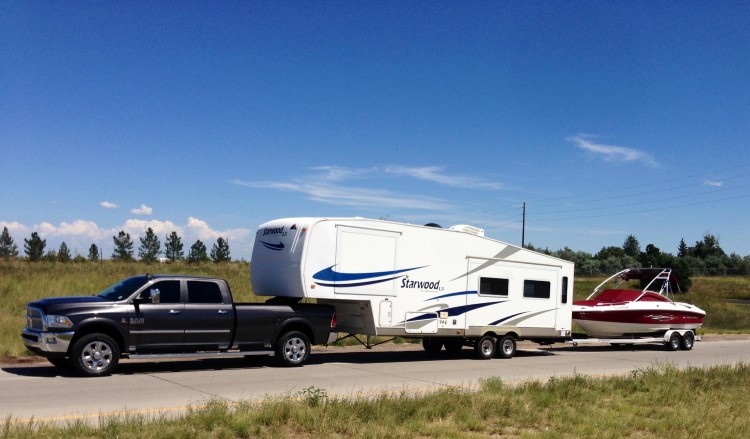 The crowning feature of these well-built trucks is the Cummins turbo diesel, an incredibly reliable engine produced exclusively for Dodge. Founded in 1919 by a mechanic from Indiana, Cummins has focused on diesel engine design, production and development for almost 100 years. The trucks that feature these diesel motors are nearly bulletproof, and the Ram 3500 offers best in class towing capacity at 31,200 pounds. With 900 pound feet of torque on tap, even massive loads are handled with ease. 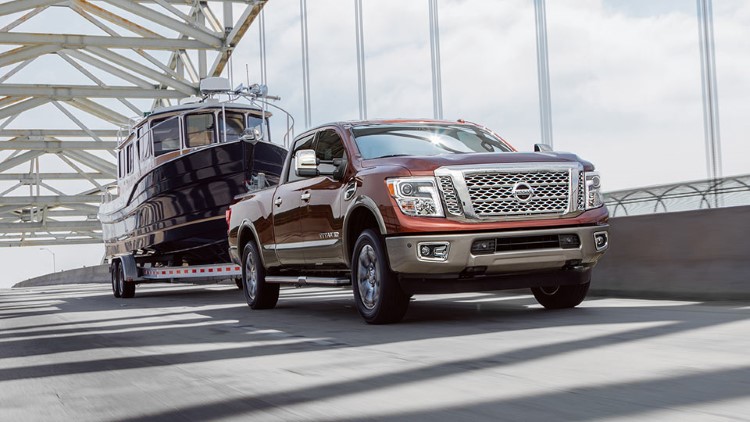 The Titan was introduced in 2003, and buyers looking for a foreign alternative to the popular American trucks quickly started snapping them up. The two- and foor-door models share the same 305 hp V8, and have available features like an auto brake limited slip and all-wheel drive to help get those loads where they are going. 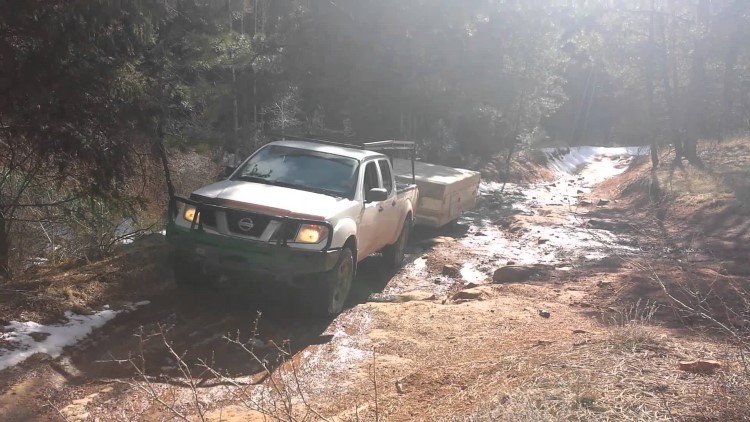 The Japanese automakers first foray into the world of pickup trucks, the Frontier is a small sized pickup offered with a V4 and optional V6 motor. Able to tow up to 7,000 pounds, it still returns 19/23 mpg. With a base price of $18,000, it’s a great choice for price conscious consumers who do some occasional towing and may not need a $75,000 diesel truck. 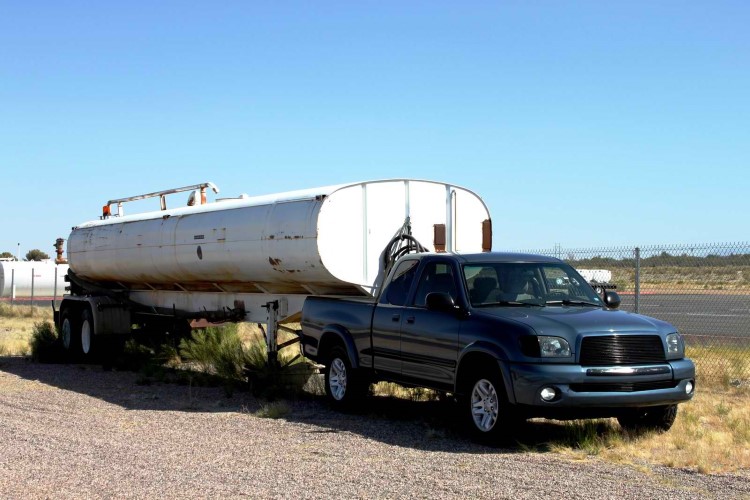 A step up from the small trucks the company is well known for, the Tundra retains the character and charm of the venerable Tacoma while upgrading it form modern, heavy-duty use. Built in Texas, the truck is made to appeal to working class Americans. It is built to tow and haul, and features an integrated towing mode, trailer sway control, tow hitch receiver and a 5.7-liter V8 to back it up power-wise. 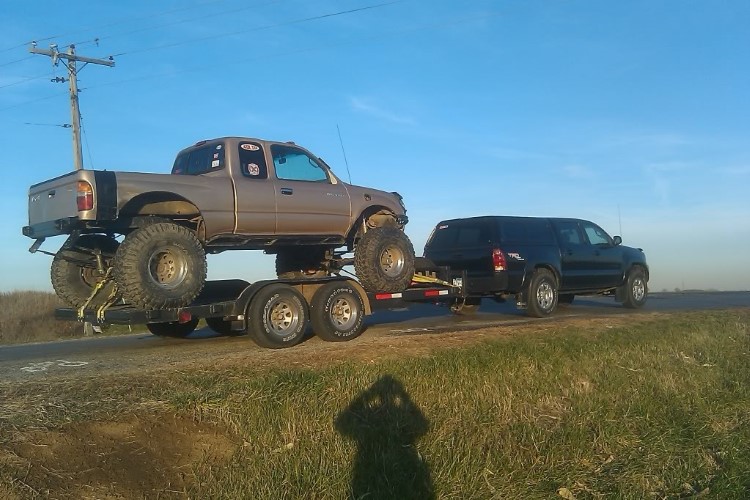 The much loved, used and abused “Taco” is Toyotas flagship vehicle, and one of the most sought after used cars in the country. They are renowned for their unflagging nature, able to withstand anything and everything that gets thrown at them. With a short wheelbase and smaller size, they are fantastic off road and can conquer or climb just about any obstacle. When used for towing, their maneuverability and incredible reliability make for an easygoing time. 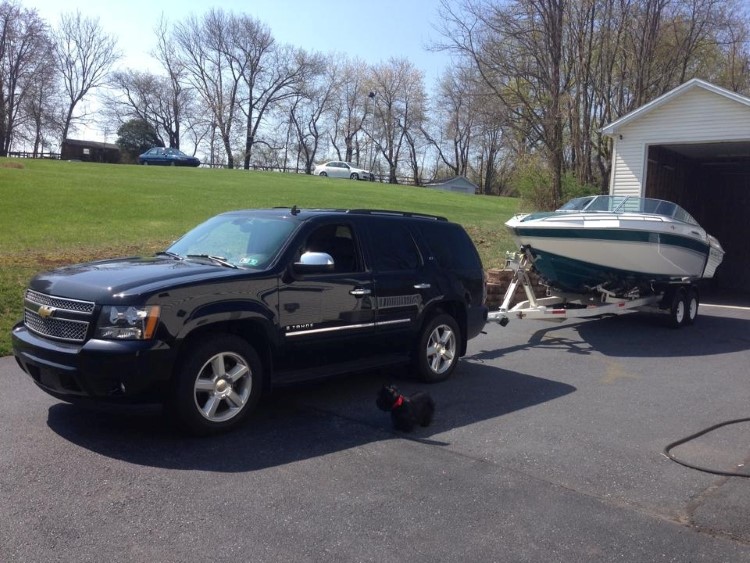 The longest continuous use of a nameplate still in production, Chevrolet has been producing Suburbans since 1935. Starting out life as a station wagon they have since morphed into a large SUV, capable of transporting eight passengers or towing up to 9,600 pounds when outfitted with the 6.2L Vortec V8. 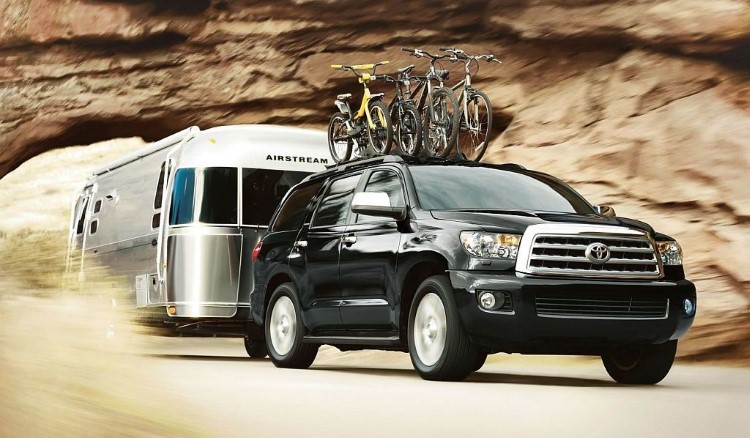 One of the most capable SUVs for sale today in terms of towing ability, the new Sequoia can haul 7,400 pounds, and when paired with Toyotas legendary reliability it makes for a worry-free way to move and tow what you need to. Despite a hefty price north of $50,000, these SUVs come packed with technology and creature comforts, not to mention the 380 hp V8 that can drive all four wheels while still returning 17 mpg on the highway. 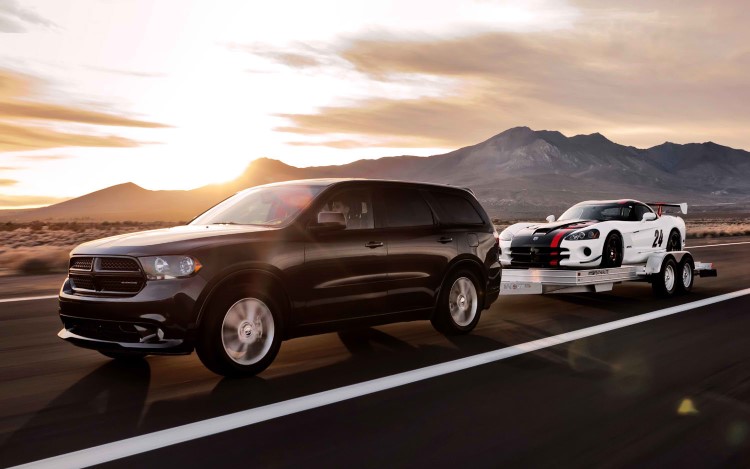 The sleekly restyled Durango is a full size SUV that has been produced by Dodge for almost 20 years. Recently reworked to offer a more luxurious and upscale experience the 5.7L Hemi still makes loads of power, and when paired with performance steering and suspension systems trailering a boat or RV is easier than ever. 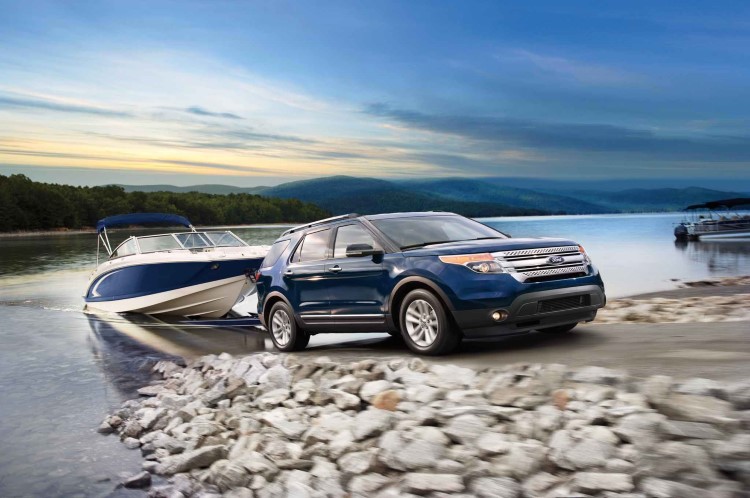 An MSRP of only $31,000 and 27 mpg on the highways make this a budget friendly option for people looking for a new and highly capable SUV. 4WD with intelligent terrain management lets it go anywhere, and it can still tow a few thousand pounds even when equipped with the 4-cylinder engine. 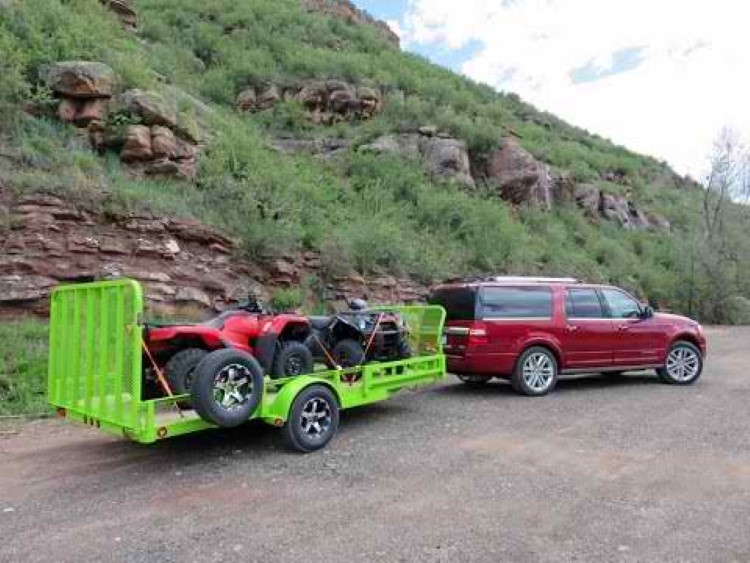 The big brother of the Explorer, the Expedition offers full size capability and rugged performance. With 130 cubic feet of cargo space, you can fit anything you need to carry inside of the cabin and it offers a voice activated navigation system, cross traffic and blind spot alert systems, rain sensing wipers, and continuously controlled suspension damping for an easy driving experience. 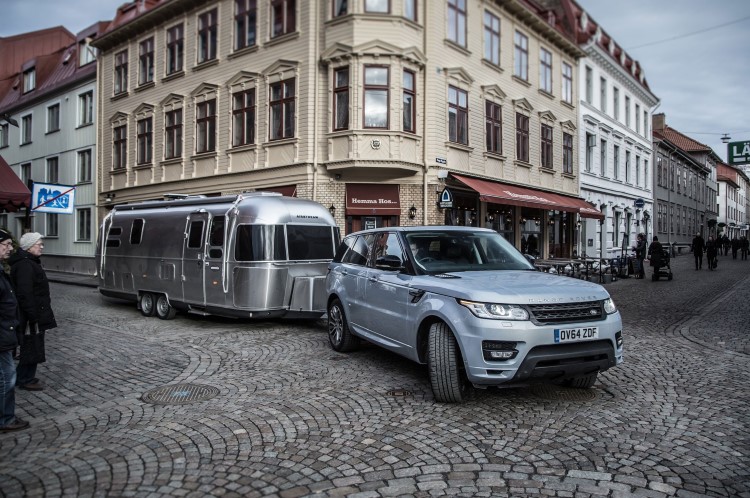 An incredibly luxurious and high quality SUV, Range Rovers have loads of prestige and a vaunted history ferrying around celebrities, heads of state, and royalty. This being said, they are equally comfortable fording a deep stream, ripping through a muddy field, or climbing a steep mountain road and can tow up 7,700 pounds – as much as some trucks! 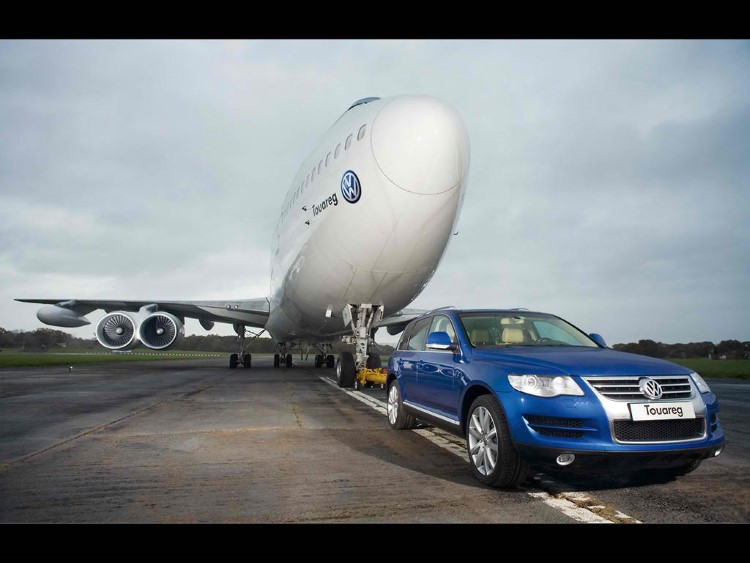 Not everyone wants to drive around the city in a massive truck that’s hard to park, even when there’s some occasional hauling that needs to be done. When buyers are looking for a new diesel powered work machine VW is probably not the first thing that comes to mind, but the Touareg could be purchased with a beastly V10 turbo diesel motor. Making 309 hp and 550 pound feet of torque, this luxury SUV can tow a 7,500 pound trailer with ease while pampering the driver in an upscale leather interior with wood grain finishes. 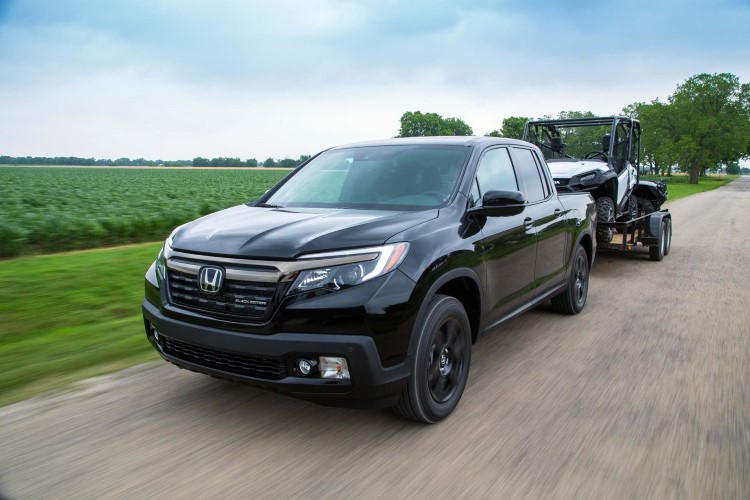 More crossover and car-like then the other vehicles on this list, the small and sporty CRV can still tow a 1500-pound trailer. A Civic-based high roof wagon, the CRV sports an ultra-reliable Honda motor but has the ground clearance to get to places that would leave most passenger vehicles stranded. 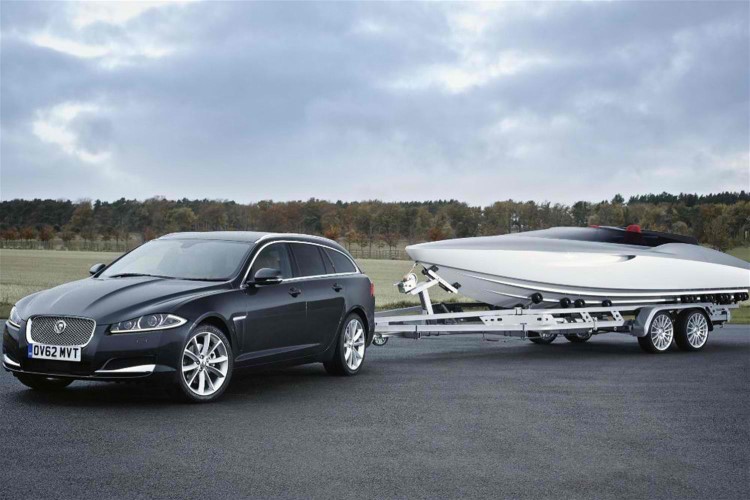 A sports car may seem an odd inclusion here, but the optional 2.0L turbo diesel motor provides gobs of on-demand torque and the heavier car can settle even decently sized trailer loads, making this classic British sports car able to tow up to a few thousand pounds. As silly as it seems, this highly engineered sport driving machine would be perfectly comfortable pulling a small boat or RV, making it a versatile option. 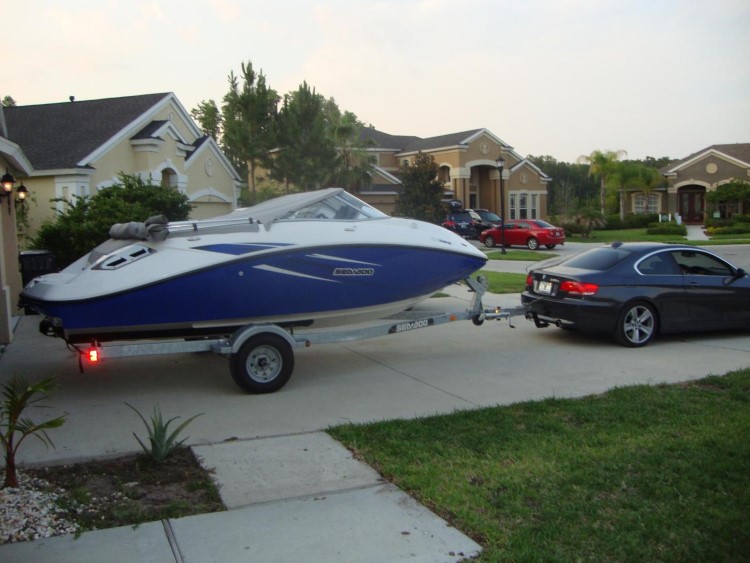 A cross between a sedan and a crossover, the 5 Series GT looks like the average passenger car offering from BMW but can tow an astonishing 4,600 pounds. Thanks to a twin turbo V8 that makes 445 hp, this sedan can do double duty as a sporty driving machine or people packed load hauler, making it a rare and exclusive hauler.